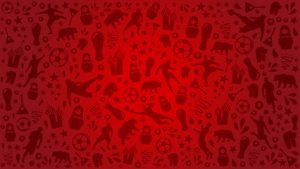 When asked what color is associated with Russia the most, most people will, without hesitation, pick the red color. It is understandable. Some people instantly got reminded by The Red Square, with the candy castle like St. Basil Cathedral. Others will associate the red color to communism, in which Russia is famous for during the Soviet era.

Red in Russia is “krasny”. In the past, it wasn’t always meant red. It used to describe beauty. Something beautiful, honorable, and good. Beautiful in Russian is “krasivy”. Those two words are closely related and have similar roots.

From Red Square to Russian traditional dress, Red has a rich interpretation in every aspect of Russian Culture. Red is embodied in many areas of Russian culture. It is not only limited to Red Square and communism. It means a lot more than that. In general, if there’s a word to describe red color in Russian culture, it is “important”.

Because of the mixed-up between the words “beautiful” and “red” in the Russian language, the naming of Russia’s most popular landmark Red Square was a product of this language derivation. It is said that the Red Square was not originally named red because red dominating the landmarks here. Instead, it was originally named “the beautiful square” because the square is well, beautiful.

It should have been Krasivaya square instead of Krasnaya. Nowadays, both names serve this UNESCO World Heritage Sites well. Red Square is both red and beautiful. The Kremlin wall is painted with red and the cathedral St. Basil also is dominated by red color. Other landmarks such as GUM, Lenin mausoleum, are not red. But all these landmarks combined make the most popular spot in Moscow breathtakingly beautiful.

2. Communism and the Soviet era

The second and perhaps the most popular meaning of Red in Russian Culture is communism. The February revolution in 1917 Russia marks the beginning of the communist era in Russia. A new flag is formed, it was red and gold. The symbolizes the blood shed during all the revolutionary wars. It also symbolizes the blood of working-class citizens who fight against the feudal and the capitalist.

Many aspects of Soviet then incorporate the color Red. It became the identity color. The Red Army is what Soviet soldiers are called. They have red five-pointed stars as the Soviet symbol. There are red banners, red flags, and red guards. Soviet children must wear red scarfs when going to school. Red was inseparable from Russian daily life during the Soviet era.

The full name of Red Army is The Workers’ and Peasants’ Red Army. It’s the army and the air force of the Soviet Union. In the past during the world war era, the red army was the largest land troop in world war II. Their number played a significant role in defeating Nazi Germany.

What’s interesting about The Red Army is it’s also comprised of women soldiers. Get to know about roles of women on Soviet military here. On a broader perspective, also see the roles of women in Soviet society in general in this article.

Krásnyj úgol means red corner or beautiful, bright-shining corner. It’s a religious corner in Russian household where family put religious icons. Russian is largely an orthodox country. The practice of having a corner for praying and worship is largely practiced by Christian orthodox believers. Apart from Russia, other eastern European countries also have this practice.

Most of the time, there’s nothing red about this corner. It is more about “beautiful” than “red”. Family members usually hold prayer at Krásnyj úgol. It’s a family altar and a small worship space at home. Some icons placed here include icons of Christ and the patron saints of the family.

Like everywhere else in the 21th-century world, red could also mean love or an act of love. Along with pink, the color red is a universal symbol of love, passion, or affection. It could also mean sexy. This is also true among Russian people, especially among the young generation. A red rose means passion or love, usually given to a girl by a man when he wants to express his feelings.

There’s a superstition where mothers would tie a red thread on a child’s arm. The red thread means to protect the children from bad things. It could be bad luck, or it could be bad friends or influence.

7. The red place for guests

Treating guest well is an important thing in Russia. When someone visiting a Russian household as a guest, he or she will be seated at a place called the red place or a place of honor. It means a good gesture in Russian culture. It means the hosts give the guests his/her ultimate respect.

In the Russian fashion world, red means active and bold, pretty much like everywhere else in the world. Sometimes. Russian women wearing bold color such as red to make a statement. Wearing red lipstick is considered sexy, if not aggressive. Women would wear red dresses will almost always attract attention.

On traditional attire, red means blood which indicates life. Red means vibrant and bright. Traditional dresses are often decorated with this color to bring out the life out of it.

If you are curious about fashion among Russian women, you should check out the street style of women in Moscow.

So those are 8 Meaning of Color Red in Russian Culture. In conclusion, red is tied closely with the identity of Russia in the past. At present days, Russian attitude for the red color is pretty much like every other country in the world.