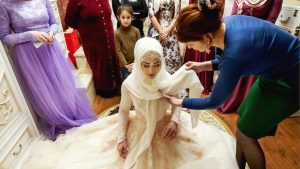 Russia is one country that has many religions and beliefs. Russia frees all its inhabitants to embrace any religion as long as it does not rebel the country. Very different when Russia was controlled by the Soviet regime. At that time religion was not permitted, and all celebrations had to be based on the state. However, now it’s very different. all communities are free to carry out celebrations according to tradition and religion, one of which is a wedding celebration.

One of the more developed religions in Russia is Islam. One area with a Muslim majority is tatarstan. Tatarstan was the subject of a Russian federal city with thousands of cities in Kazan. Islam is the religion with the most followers in Tatarstan. And the biggest nation is the Tatars.

Islam greatly influences every aspect of the life of tatarstan citizens. And one of them is the wedding celebration. Tatars have a special tradition of celebrating weddings. Tatars’ wedding traditions are strongly influenced by Islam. And this tradition is still being done today. This tradition is different from other Russian wedding traditions. Because most of the population is Russian Orthodox Christians, so the marriage ceremony between Muslim Tatars and other Russian nations is different.

Then what is the tradition of Muslim marriage? In this article we will provide a complete explanation for you. here are 6 astonishing Muslim wedding traditions in Tatarstan, Russia.

Clothes are something very important in a marriage. Clothes are the symbol of identity, and that is what tatar society does. During weddings, they wear clothes according to Islamic teachings and are traditional clothes. They always maintain their identity as a Muslim and a Tatars.

The traditional clothes of the new tatar bride are different from the usual European clothes. The bride is a symbol of courtesy and virtue in marriage. So the bride must use white clothes that cover her entire body, including her hands and neck. And if you use a tunic with trousers, you should also use a hat and scarf that covers your hair and neck completely. There is no body part of the bride that can be shown to other men besides her husband, except the face and palms. In addition, the bride’s clothing must also be loose, not to form the curves of the body, and made of thick cloth. This is the way the Tatars show that women are a symbol of modesty. And they show their identity as a Muslim.

And to keep the groom’s clothes as usual. The groom uses a classic black, dark blue, or other color suit that comes with a white shirt and tie. For the groom’s clothes, it is not much different from European wedding clothes. The only thing that distinguishes it is that the bridegroom is obliged to use headgear, namely skullcap. Skullcap is a headgear for Muslims.

3. Redemption Of The Bride

In the tatar tradition on the wedding day, parents bring the groom to a special room for the future wife. The groom can’t immediately get his bride. The groom must pay full dowry or give extra money. The groom together with the witness began paying dowry and gave a big prize. Mahar is given to the bride’s parents before the wedding. After paying the dowry and going through several challenges, the groom can get his bride.

This tradition is the tradition is the most astonishing of other traditions. Guests visit the holy place where the first night occurred. They touch the bed and put coins on a special plate. In addition, older women teach the bride how to welcome her future husband, say softly, and serve her husband well. Very different from the usual wedding tradition. This is usually not a necessity to be taught. However, Tatars always teach this to the brides.

And for the groom, he must complete some special assignments given. That is a way to prove that he is strong and smart. And that is the way the groom must do if he wants to get the right the first night. Very interesting, right?

5. Moving The Wife To Her Husband’s House

Transferring a wife to her husband’s house is a special ritual in the marriage of an adult. This ritual is believed to affect the family’s future. This ritual helps the bride to show her husband’s family that he is a good wife and housewife.

On the day the wife was taken to her husband’s house, the wife would meet her husband’s parents. And the guests welcomed him by putting skin or pillows under his feet as a symbol of warm greetings. The mother and sister of the bride are also treated well with bread and honey. Then the bride’s relatives offered to dip their hands in flour which was a symbol of prosperity for the new family.

In the tradition of the marriage of Tatars, they choose traditional food as a meal for guests. They serve thick lamb soup and homemade noodles, with fruit juice drinks, carbonated water and not carbonated. And there is no alcohol at all. Alcohol is a prohibited drink.

In addition, they also provided two flat swans representing the two brides. Traditionally, this dish should only be served by older men appointed by the groom’s parents. Then they also served Gulbadam. Namely a wedding cake with multilayer contents, namely meat, rice, cheese, and raisins. a quarter of gulbadam must be given first to the groom’s parents, then to relatives, and also to the guests. They also make chak-chak. Chakak is a fried dough with honey prepared by the bride. Chak-chak is a typical tatarstan sweets.