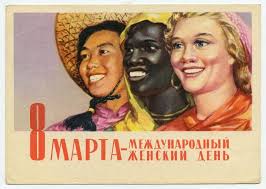 One of the few holidays that can be celebrated during the reign of Soviet Russia is the International Woman’s Day, at that time known as the Russian St. Valentine’s Day. Russian celebration of International Woman’s Day sets itself apart from the rest of the world by combining the festive Valentine mood and the simple Mother’s Day celebration. The Russian version of International Woman’s Day is regarded as a very important event comparable to Mother’s Day, and thus 8th of March recognized as a public holiday. Many workers get the day off, and some celebrate the holiday together with friends, sharing simple cakes and champagne in the office, while those with close-knit relationships such as family exchange heartfelt, often expensive gifts to show their appreciation to their beloved. This holiday also has a parallel in the form of Men’s Day, celebrated two weeks before Woman’s day, at February 23rd.

The demonstration on March 8th, 1913 demanding the right to vote for women marked the birth of Women’s Day. The celebration was formerly political in nature, celebrated as a symbol for women’s rights and equality. The celebration was intended to bolster their spirit to demand for better pay, treatment, and rights in the workforce. Time passed, and the holiday’s original political intent faded into a spirit for more peaceful approach in the wake of World War I and eventually the day became a day to celebrate women instead. The holiday was recognized as a public holiday in 1918 as parallel to Men’s Day. It remains as a working day until 1968, when the Soviet decreed it a holiday.

After the holiday loses its political nature, the focus shifts towards a more women-oriented holiday, where they appreciate mothers and all women in general, celebrating their achievements in everything, ranging from economical to personal. The combination of this woman appreciation and Valentines’ Day came due to the fact that some iterations of Valentines’ Day is viewed as foreign import and fail to encompass all woman due to the focus on the romantic kind of love, which indirectly undermines women without a partner.

Some with a more festive mood celebrate the holiday in theatres and concerts, listening to the actors, actresses, and singers perform songs and poems about love, beauty, and women. However, it is rarer for Russian people to celebrate this way, as they choose to celebrate the day in the traditional way along with friends and family. Men and women give flowers, chocolate, poems and postcards to their beloved women. Some families celebrate by eating a nice meal together and sharing a conversation. Meanwhile, those with very close relationships such as romantic partners or mother and daughter, exchange more expensive gifts such as jewellery.

At schools, children are taught to create a craft pertaining to the occassion. Schools celebrate by arranging flowers, making origami flowers, or even making handmade greeting cards to give to their sisters, mothers, and even teachers.

Sometimes, the celebration is further enhanced by the men taking care of cooking dinner and looking after the children, adding more to the spirit of the holiday by letting the women rest for a full day.

Flowers are the most common gift to be given on this holiday, and thus, the spring flower blooming in March is a popular choice. People line up in stores, and women can be seen holding bundles of flowers and other assorted gifts with a bright smile on their faces. Obviously, this day brings with it a massive profit from flower industries, the sale of the day skyrocketing to equal to that of a month, netting them up to $150.000 worth of profit.

As much as 70% of flowers sold in Russia is imported from other countries such as Netherlands, Ecuador, Israel, and Columbia due to the difficult conditions and bitter-cold winter making growing flowers expensive due to the synthetic heating and greenhouse maintenance. Consequently, the export sales of those countries increase as well. The most common flowers are roses, chrysanthemums, and tulips.

At one point in 2014, the relationship between the Dutch and the Russian soured, prompting a massive burning of Dutch flowers due to the Dutch flower banning. The incident was quietly swept under the rug, and trade between the two countries opened up again as the tension between them dissipates.

Even though Russia is still a highly patriarchal society, the value of mother is still held in very high regard, as the holiday is the day where men willingly do the house chores so the women can rest. Men and women of all ages express their gratitude and offer their congratulations for their sisters, mothers, friends, and even co-workers, while those with a close relationship such as families feast and have a friendly talk. Looking past the flowers, gifts, and extravagant food, one can find a deep value within this important holiday.

If you are interested in more, you might want to read our other Russian culture articles such as History and Tradition of Russian Samovar and History and Benefits of Russian Banya. If you are interested in learning Russian language try reading Get Closer to Russian Language with Music, Common Greetings in Russian, and How to Learn Russian Language for Beginners.