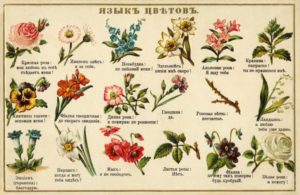 Flowers have played important roles in many cultures across the world, including in Russia. The pretty plants have not only gratified human sense with their beauties but also hold significant and deep meaning in the rich Russian cultures. This is evident by the fact that flowers are anchored in their culture, art works, and even national movement.

These badges turned out to be some kind of leaflets that quickly “gained popularity” among Russians at that time. Adorned with an inscription that said “Soviet of Workers’ and Soldiers’ Deputies” (“Петроградский Совет рабочих и солдатских депутатов” in Russian), the badges symbolised the calling for a nation-wide movement to fight against the Provisional Government.

There was one particular event in which Russian soldier stormed into the Winter Palace during the October fighting, wearing red ribbon folded into the shape of the aforementioned flower. The custom then continued on the eve of 1918 May Day’s in Russia.  A set of red carnation badges were issued in order to honour the fallen soldiers and heroes. Now, red carnations are particularly popular on Russia’s Victory Day, commemorated every May 9th. It has been a tradition to lay out even number of the flowers at war memorial sites which symbolises the nation’s mourning and remembrance of the fallen heroes.

The flower has taken deep roots in Russian history that it was carved on the stamp issued to the 27th Congress of the Communist Party of the Soviet Nation. Fun fact: if you google red carnation, you will be surprised how significant this flower has become in the world’s rich culture, from political movement to the fight for gender equality. There is also an extensive list of Russian icon with interesting histories behind them.

2. Chamomile: the National Flower of Russia

Chamomile can be easily found across Russian land. With a fragrance as gratifying as its look, the flower is definitely not to be missed, especially when you are in Russia. The Russians who have garden or dacha – a cottage or second home that is used for vacation or second home in Russia – usually plant chamomile in their gardens. It has also become popular as a wish-telling or fortune-telling flower among girls. You know, the “he loves me”, “he loves me not” until each white petal plucked off.

While red carnation is seen to be the symbol of victory, white carnation is also popular among Russians but for an entirely different meaning. Although widely recognised as a symbol of talent, the popular belief in Russia speaks the opposite. It is believed that white carnation takes away good luck and talent. Thus, it is bad omen and must not be presented to performers. However, it is also believed that if we put the white flower under our pillow, we will wake up more inspired. Let’s all place a white chamomile under our bed and get inspired, shall we?

4. No Extra Petals on Lilac!

Most lilacs only have four petals. This makes lilac with five or six petals highly uncommon and the extra petals are considered as bad luck. To avoid getting bad luck, Russians usually pick off the extra petals and bite them.

5. Red Poppies Are Not for Your Loved Ones

While vibrant in colour and very soft, Russians avoid bestowing their loved ones red poppies also for the same qualities. The soft nature of the flower makes it fragile and shed petals more easily. This is seemed to be a symbol of weakness and fleeting love. So, if you want a happy and lasting relationship, it might be best if you choose other flowers instead. Poppy seeds, though, are viewed with more optimism.

At Russian weddings, people usually eat millet porridge and poppy seed as a symbol of wishing happiness to the newly married couple. The seeds are also usually put into the couple’s shoes as a wish of procreation.

6. Lily of the Valley for the Desired Wishes

Being a nation with deep admiration towards flowers, Russia has an extensive list of flowers that are used to show affection, love, and sympathy. Rose and peony express love and self-confidence like no others, and then the famous bright coloured tulips that symbolise happiness and harmony. While chrysanthemum conveys joy and openness.

8. Not for the Sweet Ladies

Despite the extensive flowers one can bestow a lady, there are some flowers that are traditionally believed to be male flowers. Gladioli and anthuriums are among those considered as male flowers and not usually given to women.

Now that you know the meanings of flowers in Russia, the other important thing is to pay attention to the Russian flower etiquette. Also, even though flowers are generally given as sign as affection in Russia, there are several celebratory holidays where flowers are in higher demands. The International Woman Day, for example, is a very huge annual celebration where flower is involved.

Last but not list, we wish you a flowery day ahead!