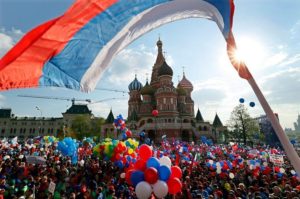 Labor Day is celebration for workers in many countries around the world. This warning stems from the American working-class strike action on May 1, 1886. They demanded that working hours be reduced from 15 hours to 8 hours a day. However, American’s goverment rejected that request. Three years later, all workers at the World Socialist Congress in Paris was endorceing the idea. May 1st is the Labor Day in international.

Another term Labor day is May Day. This day is an annual holiday in several countries. That begins with the efforts of the trade union movement to celebrate the economic and social success of the workers. Labor day as holiday in Russia. Nowadays, that day is the Spring and Labor Day in Russia. See also The Traditions of Christmas In Russia

The Meaning of Labor Day

May Day is a reminder of a historic event. Such history exists to create a struggle for the liberation of the workers from the oppression of capitalism. It also means the struggle of the workers to realize the ideals of socialism. See also Get To Know About Ded Moroz and His Granddaughter

1. Lenin as a figure in Russia

Lenin introduced May Day to the Russian workers as a day of demonstrations and struggles. Its happen at the beginning of his activities within the revolutionary movement in Russia. In 1896, while in prison, Lenin wrote a May Day leaflet which was later sent to a first Marxist political group in Russia, the St.Petersburg Union of Struggle for the Liberation of the Working Class.

Since becoming a revolutionary activist, Lenin considers that May Day is the right momentum to mobilize the working masses with the agenda of seizing political power. Not just normative and partial demands that will not produce anything.

In the event of the massacre of gold miners in Lena, Siberia, 1912, Lenin called it a period of revival of the workers. Lenin was convinced that the workers would soon seize power in Russia. According to Lenin, this bloody May strike in Siberia. The street demonstrations still associated with the event, as well as revolutionary remarks and remarks to the masses of the workers. Its show clearly that the workers are entering a period that allows immediate seizure of power. See also Easter Day in Russia

An article written for May Day by Rosa Luxemburg. At that time still the massacre of workers in Siberia in 1913. Its emphasized the importance of revolutionary character in May Day action:

“The brilliant main idea of ​​May Day celebration is the independent action of the proletarian masses, the political mass action of millions of workers . The brilliant proposal of Lavigne at the Second International Congress in Paris combines parliamentary tactics. That is an indirect manifestation of the will of the proletariat. The proposal also contains international mass protest. A strike as a demonstration and a means of struggle for eight hours of work, world peace, and socialism. ”

In October 1917 the workers were able to seize power. They were giving a wind of hope for the workers of the world to victory. They also immediately seize power from the oppressive class in their respective countries. The great success of the Russian workers in 1917 was not without a qualitative process of struggle. May Day 1917 in Russia focused on the issue of proletarian revolution.The Russian workers were able to defeat the reformist bourgeoisie and the ruling counter-revolutionary groups in the Provisional Government. Its by taking the great inspiration of the Paris Commune of 1871 and the Bloody Sunday of 1905. You may also read How to Celebrate Christmas In Russia

3. Labor Day Began To Be Ignored

Lenin died in 1924 accompanied by the collapse of the Soviet Union under Stalin and Communist International. As an international political forum for the workforce, the May Day memorial has decrease on both issues and passions. The demands raised in May Day commemoration are very normative and partial. Labor, nationalization, and workers’ control began to be considered irrelevant and utopian. Even the various “Marxists” themselves regard this issue as a historical romance. This means that May Day is no longer as a means to mobilize the mass of the proletariat. This day no longer have the agenda of the great struggle for the liberation of the proletariat from oppression. May Day has become an annual celebration of festivals such as labor. Labor day as holiday in Russia.

Putin returned to the Kremlin for a third term in 2012 after a massive protest against a decade of reign. After independence Moscow against the Crimean peninsula of Ukraine in March 2012, patriotism in Russia has risen. The Russian community raised a rating of support for Putin.

For the past few years Putin has cleverly attracted the nostalgia of middle-aged residents in Russia. With the stability and status of the great power of the Soviet Union and even revived the Soviet-era award. Putin has pinned a Workers Hero’s medal to some Russians. Read also The Unique Wedding Traditions in Russia

Russian citizens show real solidarity and focus on the main things of the past. Included in the relationship with Ukraine. Large group of demonstrators waving Russian flags and balloons. They then marched into the Moscow symbol field near the Kremlin wall. Union leaders welcome them from the podium on International Labor Day. See also Ettiquette in Russian Meal Time  and Facts about Easter Eggs in Russia