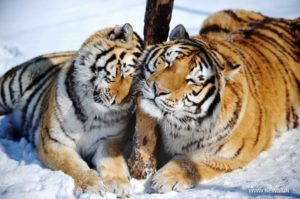 Russia is gifted with wide and large land which will have a various plants and animals . From dry land into the freezing one, this country offers a lot of things to do for us. Some of them are too good to be missed.

In Russia, they have amur tiger and amur leopard. Amur Tiger commonly lived in the Southern Russia Far East, about 500 Amur Tiger lived here. Amur Tiger – or so called Siberian Tiger habitated mainly at the Sikhote Alin Mountain region in southwest Primorye Province. Northern forest are their primary advantages and offer the lowest human density of any tiger habitat, and the most complete ecosystem. Vast woodlands allow Amur Tiger more space to roam. Once upon a time, there were 9 tiger subspecies and it reduce to 6 after 3 of them were extinct during 20 th century. What makes the population reduce was because of the deforestation and being hunted of human for the trophy, hunted for their skin, and their body parts become traditional Chinese medicine. We are not quite sure enough these tiger will survive for another 10 or 25 years later if we are not doing something for their live.

The Owl is the largest living species in their kingdom. Its name refers to their diet, the fish, and also specialize in hunting in riparian areas. This owl becomes rare year by year and doesn’t have a good status in conservation status. The Blakiston fish were well –known found once  somewhere in Russia. Although the owl eats frog, there are not just distinguished by their size. The owl evolved for become the fish hunter. They are stupendous hunter and even able to take down salmon two – three times heavy as they are.

Unlike other owls which famous for their steady-silent flight , and stealthy, Blakiston have loud flight, probably because they are catching the fish, and of course fish were not listening well their loud flight, lol. This big owl also walking around the river and not go far from the place where they eat.

Brown bear, is one of the most exotic animals in Russia. The bear also represent the “bearish” in marketing stock. This animals usually living in forest or tundra and can be found across Alaska, and mostly in Russia. While the population are relatively stable, they are top priority for the authority in conservation. Brown bears are importants management indicators for a number of other wildlife species. At the food chain, the brown bears also play important roles as preators who keep other animal populations in check.

What disturb the population of brown bears is the buman itself. People often hunt for their hides, meat, and as the trophy. Deforestation and habitat destruction added the problem of their population.

Due to human expansion, its reduced brown bear livestock, crops, even the water supplies, and human must do something to prevent this.

Famous by the name, polar bear well known as they can be found and live mostly on the sea ice of the arctic ocean. Polar bear has a thick layer of body fat and a coat which insulated them from cold air and water. This animals classified as marine animals because they spend most of their times on the sea ice. Don’t underestimated their ability for swimming. Although having a big body, they are a good swimmer even reach six miles per hour by paddling with heir front paws and holding their hind leg flat like a rudder.

Their main diet is meat, and their favourite meat is the seal. They spend almost 50 % of the time for hunting the food.  They need to hunt as much as they can because they need large of fat to survive. Polar bears are the top of the food chain and have an important role in the overall food chain in marine environment.

The climate change surely threatened the polar bear. Polar bears depend on sea ice for their existence and directly impacted by climate change. Hotter year by year, the sea ice cracks and melted slowly and its not a good news for the bear. Not only the climate change, others keys threats include human hunting, conflict incident by humans, and industrial impacts. We both know that oil company . The offshore installations in the Arctic are expected to increased in large number and would impact the polar and their habitat.

Who’s don’t know this animals? When I was kid and playing several games in playstation, I was Interested with hunt games and included this deer. We are the hunter which carrying a gun and walking and the main objectives was hunting these deer. Others remembered this animals as santa’s living ride, helps him to carrying lots of gifts at the night before Christmas.

Now, what I think about these animals were fantastic. Mr.Vladimir Putin , the president of Russia is one of my favourite president all the time. Imagine why this man still have a good shape of their body, even play heavy sports? He believed deer antler blood has something to do with it.

Putin is one of many Russians who have consumed and bathed in blood from antlers of Siberian red deers.  It was believe the blood gives them strength and stops the aging process. This is true controversial since it has no proof in science. Because of the believe, many antlers farmer across Russia were sew the antlers from the deer. They are producing antler blood creams, pills, alcoholic drinks, and offer bath in what they said “ the antler broth” . The products are sent to Asian, mostly China where they have similar belief in the bloods benefit.

This animal is very unique. This lynx is a medium –sized wild cat who can be found mostly in Siberia, Northern, Central, and Eastern Europe. This animal classified as a solitary animal, prefer to hide in the forest for stalking the prey. Although they are skilled in hiding, population of this unique creature were reduce drastically specially in Western Europe where populations are small and fragmented. Lynx was most likely hunted to extinction for its fur for great price.

What makes this animal  unique is because of the small tufts of black hair on each ear which improves their hearing. Their coat is very thick and able to prevent them against cold weather. The  lynx have various prey but they tend to focus on deer. Usually they eat about 1 – 2 kilograms of meat everyday.