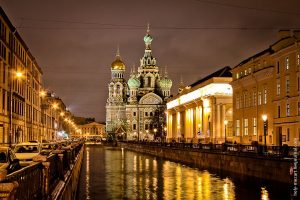 Last July, 2018 Russian World Cup has officially ended. As many as 32 registered FIFA member countries coming from across the globe have come and ignited the world class euphoria in the host country. You will not only see athletes, but many of soccer fanatics too.

Russia is known as the largest and widest country in the world. With it’s total areas reaching ​​17,125,100km, it would be such waste for the country for not having interesting places that’s worth to pay a visit. One of them includes the unique capital city, Moscow and the lonely little Kaliningrad city which is full of surprises.

Below is our list of 5 beautiful and most visited cities by tourist in Russia that are very worth visiting if the country is next on your travelling bucket list:

Moscow, of course will not fail to rank first in the lineups of 5 beautiful and most visited cities by tourist in Russia. One won’t need to question the ability of a capital city to attract tourists. Who doesn’t know Moscow? The city has managed to successfully held the World Cup in two of it’s magnificent stadiums: Luzhniki and Spartak. In addition, the city another great attractions can also be found in Saint Basil, a Disneyland like used-to-be church museum with it’s signature onion shaped dome, located in the Red Square adjacent to the official residence of the President: Vladimir Putin. Find more exciting places in moscow from its Exclusive Shopping Outlet and Restaurant Visited by Tourist in Moscow.

The colorful Saint Basil and the popping red of the Red Square is then recognized by UNESCO as one of the cultural heritage of Russia since 1990. The site is open to visit every day, since it is open and will only be closed on public holidays. The location of the Red Square is very strategic, right in the middle of the city hence will make it easier for you to find it.

Saint Petersburg ranked next in 5 beautiful and most visited cities by tourist in Russia lineups. It is the second largest city with a high level of activity in Russia. Do you know that alongside Moscow, Saint Petersburg is also currently the most popular tourist destination in Russia? The city is known for having many world-class museums, theaters, palaces and beautiful cathedrals.

One of the famous landmarks is the Hermitage museum which is one of the world’s grandest museums that offers a large collections from the Roman Era. The museum was dubbed as the second largest museum in the world after the Louvre in Paris. It offers various art and culture collections and began to be opened to the public since 1852. In addition to the city, there is also the Church of the Savior on Blood, a bluish colorful church with baroque and the beautiful Neo-Classic ornaments. If you’re visiting the city in the summer, you can also enjoy the famous White Night phenomenon as a bonus. Take a look at St. Petersburg fashion style that makes you curious to try.

City where Asian and European cultures meet, hence sometimes dubbed as the Istanbul of the Volga. It is the capital city of the Turkic speaking people, Tatars, who is known for living the highest standards in Russia. Kazan offers a variety of interesting tourist destinations, such as the national Tatars museum, the Kremlin and the traditional culinary museum Chak Chak.

An enclaved and separated city of Russia sandwiched between Poland and Lithuania. It has no common border with Russia, hence history records some strong Soviet countries interference which then left the city a significant culture. Going there would mean you need to leave Russia, to the point of going overseas, where you need to pass at least two countries just to get there. Kaliningrad today is known as one of the most unique cosmopolitan cities in Russia thanks to it’s history that involves the Soviet influence which can be found in the architectural of the buildings throughout the city. Some of them are the surviving Brandenburg Gate, canal buildings and Fishing Villages.

Yekaterinburg is located in the middle of the Eurasian continent, bordering Europe and Asia. This 4th largest city in Russia offers a very interesting historical tour. It offers at least 60 museums, art galleries and ancient theaters. In 2014, Yekaterinburg became the third most popular city in Russia according to tourists after Moscow and St. Petersburg. One of the city’s famous tourist destinations is the Romanov Death Site. A church with a Byzantium architecture which holds a heartbreaking story about the murder of Tsar Nicholas II and his family by the Bolsheviks in 1918. Read here Undeniable Reasons to Visit Yekaterinburg

If you’re not into crowds and hustles or prefer more of peaceful natural nuances, Russia also provides varieties of natural tourist destinations that are no less than breathtakingly beautiful. Among them are the oldest and deepest lake in the world, Lake Baikal, the Altai Mountains, known as the birth of the Turks ancestors, the Kamcathka Peninsula which has amazing natural beauty and many other more.