Who does not love cake? This dessert has various kinds of flavor. You can easily find chocolate cakes in many cake or coffee shops where you can enjoy your favorite drinks with sweetness from chocolate cakes. If you prefer to eat the cheese one, you can order some cheesecakes, which is best to serve when it is frozen.

Not only it has many kinds of flavors, but the cake also has many basic types. For example, you must have heard of chiffon cake. This is a very light cake made of flour, eggs, sugar, baking powder, and flavorings. The ingredient that distinguishes chiffon cake from others is vegetable oil. Most cakes usually use traditional fat such as butter. When we have a piece of this cake, the first thing that pops in our mind is how soft its texture. This is all thanks to the vegetable oil that not only tenderizes the crumbs but also moistens it.

Another example of cake types is pound cake. This is one of the simplest and the most classic type of cake. Pound cake is made of a pound of each flour, butter, eggs, and sugar. As the final touch, you will find this cake either dusted with powdered sugar or glazed with vanilla.

For many people, a cake is just a dessert. But, for Moscow, a cake can be the symbol of the city. This is what represented by Moskva Cake. So, why is Moskva Cake a symbol of Moscow City? Let’s find out!

It all started in 2015, when the government of Moscow asked United 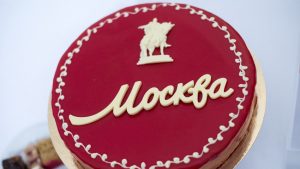 Confectioners, Russia’s confectionary holding, to make a cake that will serve two purposes: as a symbol of Moscow city and an easy-to-make-at-home kind of cake. United Confectioners made this a public event. Many people took part as participants. At the first stage, there were 10 producers chosen. The challenge was to make a cake recipe that consisted of common and popular ingredients. Based on this, 3 people were selected to go to the final stage.

In the final stage, each producer made their original cake recipe. The final stage was a competition between three kinds of cakes. They were Moskva Cake, chocolate and cranberry biscuit cake, and pistachio and cherry mousse cake. Since this event was open to the public, Moscow residents were asked to cast a vote of their favorite cake. The judgment was also given by a panel of experts which consisted of restaurant owners, confectioners, and culinary specialists.

Thousands of Muscovites participated in tasting and voting their favorite cake. With votes from more than 200,000 people and the experts, Moskva Cake won the title as a symbol of Moscow City. The name for the cake was not determined by the creator. It was suggested by the major local confectioners as a way to use Moscow as a brand. After all, the name for the cake suits the cake because hundreds of thousands of Moscow people loved this cake since the beginning of its existence.

So why did the Moskva Cake win? Was it because of the taste? For sure its delicious taste was one of the reasons behind the abundant of votes cast for this cake. But what makes this cake loved by many Muscovites are its basic ingredients that made Moskva Cake can be easily replicated at home. The inventor was successful in making a cake that uses ingredients which Russians are familiar with. The ingredients – boiled condensed milk, meringues, buttercream, and nuts – are very common local ingredients that you can easily find in any stores in Russia.

The appearance of this cake will catch your eyes right away. The whole top surface of this four-layer cake is decorated with red icing. On the red icing, there is an inscription of “Moskva” with an image of Yuri Dolgorukiy, the founder of Moscow, on top of it. Both the word and the image are made of chocolate. To make it contrast with the red icing, the inscription and the icon of Moscow’s founder are made in the white color. With those ingredients and the presentation of the cake, no wonder Moskva Cake is a symbol of Moscow City 🙂

Moskva Cake is a symbol of Moscow City so of course, it will not be difficult for you to find this cake in cafes in Moscow. Not only in café, but this cake is also served in many bakeries, cake shops, and coffee houses in Moscow. There is even a cake shop that sells Moskva Cake as well other treats such as eclairs, biscuits, and panna cotta under the brand of “Moscow”. Now you know, when you are visiting the Russian capital city, you have many options of how to find Moskva Cake.

The fact that Moskva Cake is a symbol of Moscow City is supported by its increasing of sales. In November 2015, the year of Moskva Cake’s invention, cake outlets sold 574,300 pieces of this cake. Until the end of 2018, they sold 1,7 million boxes of this layered cake. The number of shops selling Moskva Cake also shows some rising. 1,182 shops were selling the cake in 2015 and increased to 1,263 shops in 2017. Fascinating, right?

Russians love to drink tea. They do not drink tea necessarily as a part of the afternoon tea culture. Russians today drink tea at the end of meals. They will make some tea using a Samovar, Russians’ unique tea brewing device. Once the tea is ready, it will be served along with some desserts.

This is the best way you can do to enjoy Moskva Cake. You just need to have it as dessert and the tea you drink will balance the sweetness of this cake. To get the cake, you can either buy it or make it. If you make your own Moskva Cake, you are going to end up with some leftovers. You can keep the leftovers in the fridge. It will last for 2 days.