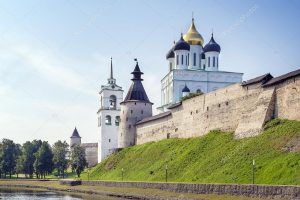 When you heard about Russia, a few cities that would come up in your mind would be the biggest one such as Moscow and St. Petersburg. The truth is, there are way beyond Russia more than just those two cities. Yes, Moscow’s Red Square is a must visit, especially when you come to Russia for the first time (chance are your plane arrived here first, anyway).

If you are a seasoned traveler with a knack of adventure, the touristy St. Petersburg’s winter palace would not be enough to satisfy your wanderlust. It’s time to take a look at smaller cities like Pskov. the administrative center of Pskov Oblast. The city lies only 20 km for neighboring Estonia. Plenty you can see here, from nature to cultural tourist spots. It’s always more satisfying to visit sites people rarely visit in Russia.

Another thing you have heard about Russia is the Kremlin. When visitors refer to the kremlin, they picture the big red building sitting on the Red Square Moscow. A seat to the current Russian government, and how media refer to Russia on political news, many people would think that it’s the one and only Kremlin in Russia.

It’s not true. There are numerous kremlins all across Russia. The big one in the Red Square is called the Kremlin with capital K. Kremlin is a fort or citadel, serve as a center of government in Russia. Almost every town has it, especially since the town has established since the medieval age. Pskov has one too, an old citadel called Krom or Pskov Krom. You should consider putting it in your itinerary for so many reasons.

The oldest fortress and the oldest city of Russia

The town Pskov is an ancient one. Historical records mention Pskov as early as 903 BC. Its fortress, Pskov Krom is erected around the 13th century. The ancient Kremlin is not only the administrative but also a spiritual center of the city of Pskov. Currently, it’s the most prominent landmark in the city. Pskov Krom currently is a candidate for UNESCO World Heritage.

Pskov itself was one the biggest city in Europe and in Russia. It was an independent republic, an important commercial center, and has a strong military defense system.

Strong Fortress to protect the city

The structure Pskov Krom is impressive it’s worth noting. There are five fortified rings, a total of 37 towers and 14 gates. Its length from end to end is 9,5 km. The wall has a height from 6 to 8 meters. The tower can tower as high as 35 meters. To properly repel the enemy attack, the wall is made very tick, a minimum of 2,5-meter thickness and at some part, can go up to 6 meters! The fortress occupies an area of 6 hectares.

In the past, the citadel has successfully endured hundreds of wars and 26 sieges. Looking at its architectural properties, you might already guess that this fortress is hard to penetrate. You were right. Pskov Krom has never been defeated. It was only infiltrated once. But it wasn’t because of the outside enemy but rather treason and betrayal from insiders. However, destruction to the large part of Krom only happened in the 20th century during World War II. The building is one of many that had to suffer attacks from the Nazi.

So what you see at the Krom today are a result of a restoration project. You can see the remnants of the 16th-century walls and towers at the Outer Town, along Sverdlova, across the Pskova River, and along Velikaya River embankment.

The fortress host several crucial landmarks such as The Trinity Cathedral. Known for its bells who are the oldest functioning bell tower in the country, you should not miss this church on your visit. The church is easy to spot, it can be seen from all side of the town.

Historically speaking, the Cathedral was constructed more than once, the latest being in 1699 by Peter the Great. Its tower has a height up to 42 m.

Among its 37 towers, 7 are also equipped with a viewing platform. The most popular is Vlasievskaya tower. From atop, you can see the whole view of the Kremlin and its surrounding area. You will notice that the landmark is located at the meeting point of two rivers, the Velikaya River and Pskova River. If you look at the other side, you will see the cityscape of Pskova, including Olginsky bridge on the Velikaya River, Lenin monument, and Church of the Assumption of Our Lady.

Good news for you who is a budget traveler, the entrance to this fortress is free. You can save a few rubles and spend it on other things such as eating at a Pskova local restaurant.

More to see at Pskova

An ancient monastery just outside the wall of Pskov. No longer a church, the site now serves as a museum holding Christian relics and artifact.

There are no short of churches around the city of Pskov. Some of the highlights are the Cathedral of St. John the Baptist or Ivanovsky Cathedral. It is the most ancient cathedral in the city, believed to be built in the 12th century.

The city’s main museum has an interesting story. It was built by a rich merchant of Pskov called Pogankin. He was hated because of his dishonesty. People called him a thief, a murderer, a man who gained his fortune in shady manners. Despite that, the museum now houses arts, ancient artifacts, rare weapons, and paintings. Also, check out other must-visit museums in Russia.