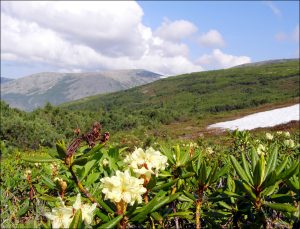 If you’ve been traveling in Russia for a while and seeking something unexpected and new, it’s always a good idea to take a closer look at the more obscure locations of Russia. These hidden gems are located sparsely all over the country. Russia is a vast nation. You will need more than a lifetime to explore its nooks and crannies.

The vast land might take more effort to explore. But thanks to its size and location, Russia is blessed with great diversity. Both from a cultural or nature standpoint, you will see stark different colors of Russia from one end to another. West Russia, which in close proximity with Europe, differs in culture and tradition compared to the eastern part of the country. All this variation is waiting to be explored by visitors.

If you want to visit a place other than the biggies (St. Petersburg, Moscow, or Sochi), you might want to consider Magadan Oblast. To reach this region, you will need to travel far to the east. It’s closer from Vladivostok than from Moscow. A land beyond Siberia, one of the way you can go there is by plane since it’s the most efficient. The famous Tans Siberian Railway sadly does not stop here.

A little bit about Magadan Oblast

Magadan Oblast is one of the remote locations in Russia. By the east, the region meets its neighbor Kamchatka Krai, the easternmost region of Russia. It has the size of France. The total population is only around 150,000 people, making it the least populated region in the country. The lack of residents means that it has an abundance in nature.

Magadan Oblast is a beautiful region. It consists of desert mountains, tundra, and taiga. The forest is thick and covered with willow, birch tree, mountain ash, and many more. The animals live here are moose, reindeer, and brown bears. Peninsulas cover the oblast’s coast. A few of them are Onara, Staritskogo, and Taygonos Peninsula. The region also borders the sea to the west. Its biggest city, Magadan, is a port city and an important trading hub.

The history of the city

The history of Magadan is not always pretty. The region served as Gulag location in the past, Kolyma Gulag to be specific. Millions of people were sent here to do hard work and manual labor. Hundreds of thousands of them died as a result of the inhumane working condition. Magadan Oblast is rich with natural resources. This abundance of minerals was the reason why many men, women, and children were sent here during the Soviet era.

Nowadays, the oblast is just the typical region of Russia. It supports its economy through mining, fishing, and agriculture. Recently, tourism also plays a role to improve the local economy. There are some sights you can see here. Here are 6 beauties of Magadan Oblast can offer for visitors

The administrative center of Magadan Oblast offers several sites you can visit while in town. The Church of the Nativity, Regional Museum of Anthropology, and the new Orthodox Cathedral Church of the Trinity. There’s also a memorial called Mask of Sorrow. It’s a monument located at the hill above Magadan, a large sculpture depicting a large head with tears. The monument commemorates those who became the victim of Gulag during the Stalin era.

Located just outside Magadan, this is where you can do any activities connected to snow. The alpine landscape provides a good slope for skiing and snowboarding. You can also try driving a snowmobile at Lake Mak Mak.

Spawning across four different sectors of Magadan, Magadansky Nature Reserve is rich with natural wonders and beauties. It’s so remote that it might be difficult to get there. However, lately, the official has been trying to study the reserve’s potential as a tourism area, especially eco-tourism. A small cruise ship was allowed to pass through and land on one of the reserve’s small islands.

The four sectors of Magadansky Nature Reserve are Cava Chelomdzhinskogo, Seymchansky Land, Ola area, and Yamskogo. Each sector has its own identity. The climates aren’t the same, as well as the topography, flora, and fauna. It’s a region with extreme climate condition. More than half of the area is covered with forests. Fauna lives here, for example, fox, brown bear, mink, and ermine. You can check using this list of animals that live in the Siberian tundra.

Currently, Magadansky Nature Reserve offers limited access to the public. You can go exploring, but you have to be accompanied by a ranger. A permit is needed, and you’ll have to go as a group. Also, read some tips about the harsh land of Siberia.

Magadan Oblast is bordered by the Sea of Okhotsk to the east. An important vessel for Russia to trade with the east countries, the sea give a passage to the island of Hokkaido, Japan to the south. Here, you can do some sailing and also fishing. The area is also rich in oil and gas.

You can also learn a bit about history. In the past, whaling is practiced here. The sea was also a location for US-Soviet conflicts during the cold war era.

The old gold-mining town Yagodnoye is now the best spot in the region for fishing. After minerals, fishing is the second most important commodity in Magadan Oblast. It is said that here is one of the best fishing spots in Russia.

The last but not least, traveling Magadan Oblast is a chance for you to meet the local indigenous tribe. Magadan is home to Koryaks, Evens, Chukchi, and many more. It’s a chance to learn about their life and culture in Siberia, which is different compared to the west Russian. There’s even a difference between west and east Siberia.