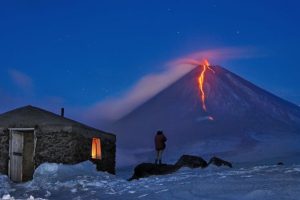 Russia is no short of UNESCO world heritage sites. In total there are 28 recognized sites, in which 17 sites are cultural, while the other 11 are natural. The abundance of these sites will make a lifetime not enough to explore all of them. Therefore, Here we’ve made a list of the 9 Beautiful World Heritage Sites in Russia you should visit.

The historic city of St Petersburg is recognized as UNESCO world heritage with a full title “Historic Centre of Saint Petersburg and Related Groups of Monuments”. This is because the site protected is not in one place but rather spread across many locations in the city.

Among the building are the Hermitage, or the Winter Palace. Peter and Paul Fortress also one of the recognized heritage site. Other building includes numerous forts and the town of Kronstadt.

The center of Moscow and the representatives of all things Russian. If you only have one day to visit Russia, it’s heartily recommended to go to Red Square. Recognized as world heritage site in 1990, the place offers dozens of sights at one place, ranging from a mausoleum, museums to cathedrals.

The Moscow Kremlin a.k.a where Putin works has a museum where the public can visit. You probably won’t meet him, but there’s a chance he’s on a helicopter heading to Kremlin. He is known to ride helicopter going to work – it’s something.

St basil cathedral is for everyone loving church, especially with distinctive Disney-esque architecture. GUM just across the Kremlin is one of the prominent shopping malls in Russia. If you want to reminisce over the Soviet era, you can head to the mausoleum to meet Lenin.

If you want to learn about the geological characteristics of this lake, you would not help but be amazed. First, Lake Baikal is the most ancient lake in the world. The lake is formed around 25-30 million years ago! The second fact, the lake is the deepest in the world. Lake Baikal has the depth of 1,642 m with 1,186.5 m below the sea level. The third fact, the lake is so large it is one of the largest lakes in term of surface area. Lake Baikal is also rich in biodiversity. Hundreds of species of flora and fauna inhabit the region, with most of them, are endemic. Wow!

With all its amazing characteristic, it’s curious why the lake is only recognized as a world heritage site in 1996. And in our list, it’s definitely among 9 Beautiful World Heritage Sites in Russia you should visit!

Many people choose to go here with the Trans Siberian Railway. Upon reaching the lake, there are many activities to do here. You can choose to sunbathe and swim in on of the lake beaches. You can also hike, or visiting the villages nearby and learn the culture. Explore the flora and fauna because Lake Baikal has cute seal living there. The seal is among the only 3 freshwater seals in the world.

In winter, the lake is frozen, inviting winter activities. This is when people go grab their skating shoes and glide through the lake surface. If you can ice skate, you should join too. Whether you want to go in the summer or winter, learn about Russian climate before you go.

One of the most important historic cities in Russia, Novgord is established as early as the 9th century. Back in the day, the city was already a cultural, political and economic center during the Byzantine era. The city Served as a bridge between central Asia and Europe. Today, it is considered the third most important city in Russia after Moscow and St. Petersburg.

Visit Novgorod Kremlin as your first activity here. On a nice summer day, you will be able to overlap the Volga river from the building. Cathedral and churches are plenty, with St Sophia just inside the Kremlin, making your trip just easier. Another important cathedral in Novgorod, Yuriev Monastery is also a UNESCO World Heritage site.

An archipelago consist of six islands, Solovetsky Islands has quite a tremulous history since its foundation in the 15th century. The site consisted originally of several monasteries. secluded, calm and peaceful, this site was a destination for religious pilgrimage.

However, during the communist era, the government decided to take advantage of its secluded location and harsh weather to transform the island into gulag (a Russian prison and a labor camp for political prisoners). Up to million of prisoner suffered and died here. Although now the site is back to its religious root, it keeps as a silent reminder of Russian weighty past.

Kamchatka peninsula has 160 of volcanoes! Yes, the peninsula is located in a volcano belt consisting that many of volcanoes, with 29 of them are active. The most active volcano is Mount Karymsky. The mount always erupts continuously. Kamchatka located in the easternmost of Russian, just beside the Bering Sea, north of Japan.

In hindsight, it sounds that Kazan is not from Russia. Well, The city of Kazan is the capital of The Republic of Tartarstan, where many tartar people live. Its Kremlin is distinct with its white limestone wall, and a mix of many different culture and religion standing side by side inside the citadel.

Sights to awe here are the Qul Sharif Mosque, a mosque that reconstructed on 1996 to replace its demolished 16th-century predecessor. Besides the mosque, there’s also a cathedral and a synagogue inside the Kremlin. This city is truly a mix of many religions.  The multicultural vibe easily makes Kazan among 9 Beautiful World Heritage Sites in Russia you should visit.

Another old City in Russia, Yaroslavl is recognized as world heritage sites in 2005 for its importance in shaping Russian history. Main sight including the Transfiguration monastery, the cathedral of the assumption and Volga promenade. Volga promenade is where visitors can see Volga River and Kotorosl meet. There’s a park with fountains just by the river bank where locals love to spend time with friends and family.

Located in Russia’s far east in the Arctic sea, Wrangel Island is a conversation for the arctic flora and fauna. The place is popular as the habitat of polar bears, along with other arctic mammals such as whales, seals, and walrus.

The island is where the last mammoths lived in the past. Traces of them can be witnessed across the island, where Mammoth tusks lie in some places, in contrast to the island’s dark soil. Mammoth here lived 1600 years more of their mainland relatives. It becomes extinct 4000 years ago.