Perm is the biggest city in Perm Krai with more than a million people resides there. With a city this big, it is not surprising to find a diverse society. There are people from many ethnics and with different religions live in Perm Krai. Based on the 2010 census, the three biggest ethnic groups living in Perm Krai are Russian, Tatars, and Komi-Permyaks. Tatars are a term for people who speak Turkic languages and lives in Russia or post-Soviet countries, while Komi-Permyaks are people who originally came from European Russia, specifically the northeast part. This Uralic racial group is easily distinguished for its conventional economic activity, such as reindeer husbandry.

Just like its various ethnics, Perm Krai is also the home of many religions. 43% of the citizens believe in Russian Orthodoxy, 5,3% declares as Christians, and 4,1% are Muslims. To support their people to practice their religions, the government built places of worship. One of them is the Perm Central Mosque.

Facts You Should Know About Perm Central Mosque

As one of Perm’s destination, there are some facts to learn about Perm Central Mosque

Perm Central Mosque is a place of worship located in Perm, precisely in the Tatar District. This beautiful building was constructed in the early of 1900 by an architect named Alexander Ozhegov. He was also the architect who built a new Mansory church for Egoshika Cemetery in Perm.

The existence of Perm Central Mosque happened because of Tatars, one of the oldest ethnic group. Their experience in religious and cultural reawakening. This participation in religious activities leads to the need for a place to practice their beliefs. To fulfill this need, the Muslim community then asked for approval to build a mosque to the local government.  As a result, the Perm people obtained permission to build a mosque in 1901. The whole construction was funded by high-income local Muslim merchants, Agafurovyh, Timin, and Ibatullin and it was finished in 1903.

The style of this beautiful mosque belongs to the Moorish Revival. The Moorish revival was introduced by the Moors, people from Northern Africa who took control over Span, brought and spread Islamic architectural to Europe. This particular style is famous with its horseshoe arch, a decoration in the shape of a horseshoe. Other than that, it is also common to find domes in the shape of onion in buildings influenced by Moorish Revival, complemented with complex patterns on the ornament. Other than Perm Central Mosque, there are many buildings that also adopted the same style, such as Palace of the Oswaldo Cruz Foundation in Rio de Janeiro, Dohany Street Synagogue in Budapest, and Cathedral of The Holy Trinity in Gibraltar. 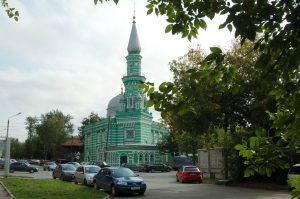 Perm Central Mosque is standing tall with a dome and a minaret. The building is dominated by green and white color so it is not difficult to find it. The round shaped dome was made of metal, built side by side near the soaring minaret. While the dome holds the function as a symbol of heaven fault, the minaret serves not only as a symbol of Islam but also to do the call of prayer. The Muslims are called to pray (adhan) five times on a daily basis. As a reminder, Muslims can listen to Adhan from mosques nearby where each minaret has speakers connected to microphone from inside the mosque.

Other than the function, it is also impossible not to enjoy the beauty of the four cupolas surrounding the minaret. Each one of it has a spire on top, just like the dome, which makes this whole resemblance make one of a very pretty mosque and acclaimed in 1911 as “Elegant Mohammedan Mosque”, This particular achievement is an important fact you should know about Perm Central Mosque so the next visit to Perm, you would not walk past this elegant place.

Russian Revolution which happened in 1917 was the reason why there was some period of time when the Perm Central Mosque was closed. On that period of time, every place of worships and convents were not allowed to function and forced to close. Even worse, some of them were destroyed. Then, in the year of 1940 until 1986, the mosque was used to keep the archives of the Communist Party of The Soviet Union (CPSU). Thankfully, in 1990, the Perm Central Mosque reopened so its function to be a place for worship for the Muslim community restored.

As one of the major places in Perm, Perm Central Mosque is not only a place for praying and listening to a sermon, but also for many other activities. People who want to learn and get the train on the basic knowledge of Islam can go to this mosque. Another educational activity to find here is Tatars and English language course. This mosque, with three-million capacity, will also be full of people on religious holidays.

To do religious activities and to enjoy the beautiful architectural style of The Perm Central Mosque is a great reason to visit Perm. But, other than that, there are also other places to visit, especially for Muslim travelers.

Near the Perm Central Mosque, there are some halal restaurants, such as “East”. This restaurant is located near to the mosque and can be reached on food. There is also another one called “Dubai”, located just a mile away from the mosque, where people can enjoy delicious halal food.  The price of a meal in Perm is relatively inexpensive. It costs around 300-600 Ruble so travelers do not need to be worry they will spend a lot on meals.

As time goes by, members of the Muslim community grow. As support of their learning, the city of Perm built a public Muslim library in 1908. This is a place for people to get as much information as they want about Islam. For book lovers, this is definitely a place to visit where they can sit and read for hours.

Other than self-learning in the library, formal education is also an important thing. That is why the city also built a madrasah. The madrasah is a primary school with Islam as its base in the teaching and learning process. At the beginning of the school opening, there were only a couple of hundreds of student attended this school, but now the number has grown larger.

These are some of the most interesting facts you should know about The Perm Central Mosque. Doesn’t it fascinate you and make you want to go traveling there? 🙂