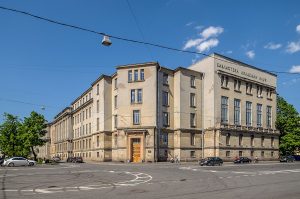 St Petersburg has always been an important city when it comes to education in Russia. Aside from plenty of landmarks in this city, St Petersburg offers more. It’s not a magnificent architecture, it’s not a piece of art, but it’s a source of knowledge, the books. Where to find and read books for free here? Of course in a library.

There are 8 amazing libraries in St. Petersburg. From the biggest and oldest library in Russia, National Library of Russia, to library for children. There’s a choice for everyone. If you looking for alternatives between Winter Palace and numerous shopping places in St Petersburg, Libraries can be a nice break. And there is no better way to improve your knowledge than by reading a book.

Visiting libraries in St Petersburg can be an amazing experience. Enjoy exceptional architecture at some libraries. National Library of Russia. Boris Yeltsin Presidential Library has a beautiful interior, it’s almost like a museum. Since Libraries are usually not crowded with tourists, you can also enjoy the vibe of reading a book many other Russian. Maybe you can make some local friends.

The legendary Publichka is situated at the busy Nevsky Prospekt. It has 34 million items, 15 millions of them are books. Access to the reading room of National Library of Russia is free, but you have to 14 years old or older to visit. The library opens on weekdays and Saturday from 9 AM to 8 PM.

Boris Yeltsin Presidential Library is not only a library, but it’s also a cultural center. It’s where exhibitions being held at times. There is a movie club here, where many well-known amateur movies being showcased at times. You can learn more about the schedule at their official website. For foreign visitors, entry to the presidential library requires a passport.

The library itself has a large collection of books from many fields. Many books here, even the rare ones, have been turned into a digital form for many to access. Boris Yeltsin Presidential Library is one of the largest electronic libraries in the world, and the only one in Russia.

3. Library of Russian Academy of Sciences

Russian Academy of Sciences Library is one of the largest libraries in the world. The library is founded in 1714 by Peter The Great, so it’s very old. It is the first state-owned public library in Russia. The library holds 20 million of items in their collection, ranging from national and foreign books, manuscripts, and other documents. The library also stores old and rare items such as fragments of Russian manuscripts from the 11th century and handwritten maps from the 18th century.

The Art Library of the State Russian Museum is located in a palace, Mikhailovsky Palace to be exact. The library has a number of collections in art, pedagogies, and humanities. There are 170,000 items on their collection, with 10,000 of them are considered rare. The art library is mainly a library for scientific purpose and research, especially in the humanities field.

Central city Public Library is situated on Nevsky Prospekt in St. Petersburg. It was a private library owned by Alexander Cherkesov which then opened to the public in 1868. The library opens everyday, the only one to do so in St. Petersburg. The library has a motto of democracy and accessibility. It means everyone has a right to access to knowledge and information.

As one of the best universities in St. Petersburg, The library of St. Petersburg State Polytechnical University has a considerable collection of books. Mostly they are books in science and engineering. Their collections cater students and researcher at the university, but publicvisitors can also take a look. They have 2,6 million volumes at their storage. They also have rare books dating back from the 17th and 18th centuries.

Unlike any other library in St.Petersburg which typically are free to enter, Book Capella is different. Not only that the library isn’t free, but the entrance ticket is also expensive. Its 7,000 rubles ($117) for a four hours visit and 4,000 rubles ($67) for two hours visit. So what’s interesting from this library? It’s the well-designed interior, and the books itself.

Book Capella has collections of books from the 17th and 18th century. They’re not the original version, but they’re the newly printed edition. The books here are also for sale, with the average price for a book costs between 30,000 and 50,000 rubles ($500 to $840). The library is truly for a library enthusiast, especially those who love an interior with gothic style. Their exclusive setting is perfect for a quiet reading.

So those are 8 amazing libraries in St. Petersburg Russia. It is always worth to make a visit to at least one library during your stay in the city. A quiet day at the library is the best especially after you crawled to St. Peterburg nightclubs the night before. After a visit to a library, check out some cool places to eat around St. Petersburg.