Writers works can draw much attention. Their writing can touch so many people, make people feel the empathy towards the stories, and even more make people want to learn to be better. Each writer has their own style. Their richness of words that make it possible for readers to feel the emotion of the stories is something that also worth to be rewarded. For example, Svetlana Alexievich. She is famous for writing novels that picturing the suffering people had experienced during the Soviet Union era. For her work in literature that also shows courage, she was rewarded with Nobel Prize in 2015.

Writings can also be controversial. The writers may write the “not a safe theme”, like when a Russian writer wrote a poem about her miserable feeling when her husband and son were taken away from her during the Soviet Union era. She had to postpone her plan to publish it to keep herself safe. Other than this, there are some other writers considered to be the most controversial Soviet writers.

Most Controversial Soviet Writers and Their Masterpiece

Some authors produced writings that make them remembered, despite their other works, as the controversial Soviet writers

Nabokov was born in Russia on March 22nd, 1899. He is known for his novels, poems, and for his study in Entomology. In 1962-1938, when he produced his first nine novels, he wrote them in Russian. He finally gained international recognition when he started to write English prose. His fame did not only come from his English writing but also from his controversial work, Lolita.

Lolita had been adapted into a lot of work of arts. Four plays, two films, one musical, one opera, and two ballet choreography showed how much this novel is appreciated. Even if the fact that many people see Lolita as purely a product of literature, some people still do not agree with its existence, moreover its adaptation.

People, who obviously not a fan of Lolita, banned a show that was based on the novel back in 2013. Not only banning it, but they were also hurting the producer and accusing him as a pedophile. They also sprayed paint on the walls of the Nabokov museum both in Saint Petersburg am Rozhdestveno. A petition to ban Lolita’s play, close Nobokov museums, and remove it from bookstores were shared in the society. All of this is actually a very interesting incident regarding the fact that the controversy of Lolita remains even 36 years after the death of its author. 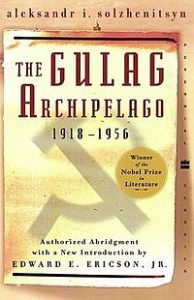 Solzhenitsyn is recognized for his novel, historical writing, and short story work. The author that born on December 11th, 1918 was a very vocal person who often criticized the Soviet Union and communism. Because of this, there is only one work of him that was allowed to be published in the Soviet Union. He was aware that the government was not in his side that was why when he knew he was the winner of The Nobel Prize in Literature, he was in doubt to go to the even because of he was not sure he would be allowed to enter his country again. One of his most controversial works is The Gulag Archipelago.The Gulag Archipelago is non-fictional writing that tells the life story of Gulag Prisoners. Gulag was a forced labor camp established by the Communist. Labour camp had a lot in common with slavery and prison on which the prisoners were forced to work as a form of their punishments. in the process of making this book, Solzhenitsyn used as many sources as possible – reports, legal documents, interviews, diaries, and also his own experience. This book got officially published only after the end of The Soviet Union.

One of the things that Solzhenitsyn talked about in this book was the history behind the existence of Gulac. This forced labor camp was started by Lenin Era and peaked during the period of Stalin. The camp that lived for 38 years was the reason that there were some times when many people were removed from the society once they were identified as undesirable by the government, an organization, or the whole society.

What makes this book controversial was not only that Solzhenitsyn wrote about the theory, legacy, and practical reasons behind the camp, but also the part that he put it all in Lenin’s feet. Solzhenitsyn had this point of view because Gulag existed before Stalin’s era but many Western intellectuals saw it more as the work of Stalin.

Through The Gulag Archipelago, Solzhenitsyn also highlighted the fact that the government relied so much on the work of the labor camp. In economic development, many construction and infrastructure works were depended on the Gulag prisoners. In ruling the society, it was impossible for the government to lead without threat which made Solzhenitsyn questioned the morality of the Soviet government. This criticism could not be accepted by the Soviet Union by that time but it surely contributed greatly to the rethinking of Lenin’s role in the labor system. Germany also used this book in their discussion about dealing with the memory of the second world war.

The Gulag Archipelago was not published in the Soviet Union but still, Solzhenitsyn received many criticisms by the part that controlled the press. He was even accused to be the supporter of Hitler. The officials’ hatred towards him led to deportation the next day after he was arrested. His Soviet citizenship was also taken away from him and restored in 1990.