When you go to a certain place and observe the architecture of it, you will find that each place has its characteristic. Take Toledo for example. This city is known as a UNESCO world heritage because of its 2000 years of history’s reflection of its ancient architecture. You can easily find many interesting architectural buildings, especially with the design of religious architecture.

Another great example is the city of Rome. You will be in awe when you are in the view of its Roman architecture, beautifully represented by the Colosseum, Pantheon, St. Peter’s Basilica, and many more. Both of those cities must be on your list of the cities with amazing designs you need to visit!

When you go to Russia, you will notice one feature at the top many buildings in that country. That feature is the onion dome. Onion domes are widely known as one of the unique points of Russian architectural design. To gain more information about the onion domes, here are some of the facts about it:

There are many speculations about the first appearance of the Onion Domes in Russia. Among those theories, some experts believe that the onion-shaped vault first appeared at the top of Saint Basil Cathedral. This Russian Orthodox church was started to build in 1555 and consecrated in 1561, which all happened during the reign of Ivan The Terrible (1533-1584). Even when Ivan’s son, Fyodor I, started to reign (1584-1598), the church has not been altered. This is proof that the onion dome already existed in Russia in the sixteenth-century.

2. The Influencers of Russian Onion Dome

The onion domes do not belong to Russia only. We can see this beautiful attribute displayed in many countries in the western world and the orient. Among those countries, some scholars claim that India and Persia are the countries responsible for influencing the style of Russian onion dome. This statement is based on the historical fact that those two countries have always been in cultural exchange with Russia.

Experts believe that the beginning of onion domes’ existence was not only in concrete buildings like the Saint Basil Cathedral. But they also believed that the onion dome was one of the features in wooden architecture like the tent-like churches. This particular design of church put onion dome at the top because its shape prevented the snow from piling on the roof. 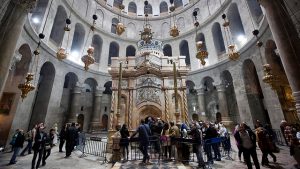 Another fact of onion domes, Russian architectural design, is the meaning behind its shape. As mentioned above, initially, the onion dome’s purpose was to prevent the snow from piling on the roof. But then, in 1917, a famous religious philosopher, Yevgeny Trubetskoy, stated that the shape of the onion dome resemble candles. From a religious point of view, candles are the symbol of a particular aesthetic and religious attitude. Another religious insight of what the onion dome resembles come from other experts. They say that the onion was a symbol to reminisce the aedicula in the Church of The Hold Sepulchre, a church located in Jerusalem. This church contains two of the holiest sites for Christians: the site where Jesus was crucified and the site of his empty tomb.

Experts also claim that there is also a religious meaning behind the number of onion domes that standing at the top of a building. Most of the time, onion domes are not appearing there alone, there is usually a group consists of three domes. They say that this formation represents the Holy Trinity. You can also find buildings that have five onion domes at the top of it. In this case, it symbolizes Jesus and the Four Evangelist (Matthew, Mark, Luke, John). There is still a chance that a building only has one onion dome. Then this standing-alone feature represents the figure of Jesus Christ.

5. The Color of Russian Onion Domes

When you go to Russia, you will find many kinds of colors of the onion domes. This one is an interesting fact of onion dome, as one of Russian architectural design. Different colors have a different meaning.  You will see onion domes in the color of gold appearing in many cathedrals. This is because the gold color symbolizes heavenly glory. There are also churches with blue onion domes on it. This color is to represent the Mother of God. Christians do not only honor the mother of God but also the saints. This appreciation displayed by the green or silver onion domes.

The colors of Russian onion domes are dominated by bright color. But it does not mean you will not find one with dark color. There are many monasteries and convents with black onion dome as their characteristic. This color is the symbol of monkhood.

Onion domes are an architectural design famous in many countries. In Russia, you can see this magnificent design in many churches such as the Russian Orthodox Church in Moscow and the Saint Basil’s Cathedral, which also located in Moscow. You will be mesmerized by the beautiful sight of those churches, especially the latter. Saint Basil’s Cathedral has beautiful bright colors all over its building. In the beginning, the exterior was in white and the domes were in gold. Thanks to the rise of mural arts in the 1600s, many artists gained more access to colorful bright colors. This breakthrough is proven by the color of Saint Basil’s Cathedral’s onion domes. It has nine domes and each of it was candy-colored differently!

There are many other examples of building in other countries that have this beautiful feature. In some countries in Asia, such as Pakistan and Indonesia, you can easily spot onion domes at the top of many mosques. Badshahi Mosque in Lahore (Pakistan) and Baiturrahman Grand Mosque in Aceh, Indonesia (the dutch built this one) are two examples of the mosques.

The onion domes are also popular in Europe. Many catholic churches beautify its building with this particular style of the dome. The first one was built in Germany. Architect John Holl designed the Convent of the Franciscan Sisters of Maria incorporated with onion domes.

You can also find onion dome in America.  This example is pretty unique because it is not a church nor a mosque. it is a multi-purpose facility that has basketball arena in it. This building is World’s Only Corn Palace, located in Mitchell, South Dakota. The whole building has decorations of crop art.

Now we have learned 6 facts of Onion Domes, Russian architectural design. The next time you are in Russia, don’t forget to visit some of the buildings with this aesthetic design.