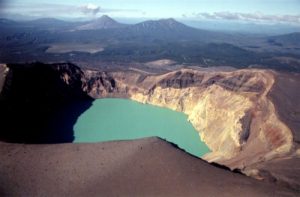 The easternmost peninsula in Russia, Kamchatka Peninsula, hides a natural wonder that makes the world curious, scientists and regular people alike. That natural miracle is Karymsky Lake. What makes this particular lake special? Here are the 10 facts of the acidic lake of Karymsky, Russia.

1. It’s a crater lake at the Kamchatka Peninsula, Russia

Karymsky Lake is a crater lake at a long-dormant Academy Nauk caldera. It’s formed after an eruption thousands of years ago. It’s located in Kamchatka Peninsula, Russia. Kamchatka Peninsula is a part of the pacific ring of fire. On the map, you will see it is located on the easternmost part of Russia. It is close to Japan, another country with so many volcanoes.

2. The name of the lake is taken from an ethnic group

Karymsky Lake, along with Karymsky Volcano is named after the ethnic group who inhabited Kamchatka Peninsula called Karyms. It’s an ethnic group resulted from the mixing of Russians with Evenks and Buryats ethnic groups.

3. It’s close to the Karymsky volcano

Karymsky Lake is situated in the same area as Karymsky Volcano. It’s a stratovolcano, with a 250 m wide caldera, located 3 km from the lake. The lake of Karymsky volcano has around 80-120 m depth. The volcanic lava surrounded the mountain is less than 200 years old. The volcano is the most active volcano in Kamtchaka. It erupts continuously. There are 20 eruptions in 100 years alone.

4. One of the largest lakes in the world

5. An eruption that changed everything

It happened in 1996 when an eruption changed the chemical composition of the lake’s water drastically. There was an earthquake which triggered an underground eruption underneath the lake. The eruption spewed out columns of ashes and lava into the air. Approximately 30-40 million tones of substance thrown into the air, most of it got back to the lake and contaminating its water, forming mixtures of sodium, calcium, sulfate, and magnesium. The resulting mix changed the PH of the water from 7.5 to 3.2.

6. It kills the ecosystem around

The eruption kills every living being that’s previously live in the area. Trees disappeared and fish were killed. No longer there’s any trace of life in Karymsky Lake. Although is purely caused by nature, it can be said that the lake had become polluted. See other lakes in Russia that are polluted and uninhabited.

7. You could die if you bathe there

Karymsky Lake has crystal clear water. Sparkly and inviting, it’s a death trap for everybody who would bathe there. The acidity would kill any living being that mad enough to plunge into its water. Read another dangerous lake that would kill you called Lake Karachay.

8. The change of acidity also changed the color of the water

The acidity also changed the previously pristine water into various color over time. From grapefruit color to vinegar, to yellow-brown color.

9. It’s not the acidity that kills the fish

Actually, it was not the acidity that kills the creature of the lake. Since there were eruptions underneath the lake, the lake turned into one giant pan that boiled all the fish alive. As for the trees, the previous earthquake created a tsunami that tore out the trees. The tsunamis were up to 20 meters high. It swept up everything and covered the surrounding area with mud.

What’s amazing about nature is its capability to recover itself. After 20 years, the lake is reported to gradually coming back to its previous state. The latest research shows that the pH of the water has returned to a normal 7,54. However, the salinity of the lake remains high. The hot springs around the area still continue to spew out more chemicals, keeping the sake’s salinity high. The return of life to the lake remains unforeseeable.

Lake Karymsky is interesting, isn’t it? You might get tempted to visit this wonderful natural phenomenon. However, unless you’re a scientist or geologist on a scientific expedition, it’s impossible and certainly dangerous to visit the lake.

Not to worry though, there are no short of beautiful lakes in Russia. There are plenty of other lakes with beautiful scenery, clear water, and most importantly, safe to swim in. One of them is, of course, the popular lake Baikal. At Lake Baikal, you can go swimming, jet ski, fishing, and other watersport activities. Lake Baikal is also surrounded by a breathtaking landscape of Siberia. Check out some facts about this amazing lake to get to know more.

There are also other lakes worth to visit aside from Lake Baikal. Blue Lake, for example, is one of the deepest lakes in the world, at a whopping 258 m. It’s a favorite spot for divers. Blue Lake is situated in Kabardino-Balkaria, Russia.

If you travel to St. Petersburg, then the nearest lake would be Lake Ladoga. The third largest lake in Russia after the caspian Sea and Lake Baikal is surrounded with beautiful pine forest, little islands, and shallow dunes.

As you travel to those lakes, remember to pick the best time of the year. Summer is perfect and these are times where swimming lakes festivals are held, and make sure you pack the right clothing during this sunny season. Happy visiting lakes!