Russia is famous for its contributions to the literary world. There are many Russian authors producing writing in various genres. Their quality is undeniably one of the best in the world, which is shown by five Nobel Prize in literature achieved by Russian authors. It is also known that Russia is one of the most productive countries in literary, in line with its predicate as the most reading nation.

Freaking Great Writers From The Golden Age of Russian Literature

Golden Age is a period of time to name specifically the 19th century when Russian literature reached its golden time. There were many poets and authors born in this particular time that got recognized internationally. Many of their masterpieces are a must to read. Here are some freaking great writers from the golden age of Russian literature

Pushkin was born in Moscow on May 26th, 1799. Coming from an upper-class family, his brother and sister and him was raised with French Culture. They also learned how to speak and read in French. Family from their father’s side was a member of the boyar. Similar to this, their mother was the granddaughter of Abram Hannibal, an Abyssinian young prince who was a serf at Constantinople.

Pushkin started his career in literary when he studied in Imperial Lyceum, a school located at Tsarskoye Selo. He started there in 1811, in the same year of the school opening. His first writing “To My Friend, The Poet” was published in 1814. This poem written in the form of a letter showed how he got the influence of K.N. Batyushkov, V.A. Zhukocsky, both names are also amongst the most famous poets of the golden age.

Not only publishing an epistle, but Pushkin also produces “Ruslan and Ludmila”, a romantic Poem acclaimed to be his first major work. This poem tells the story of Ruslan who was about to save the life of his bride, Ludmila but faced many challenges on the process.

Ludmil, daughter of Prince Vladimir of Kiev, was taken away by an evil witch, Chernomor, on her wedding night. Pushkin’s refusal to obey any rules and genres that showed through this particular work had brought him to fame. Zhukovsky, one of the figures of Russian Literature gave his highest praise by saying that he had been defeated by his protégé.

Pushkin works are always remembered for its richness of word. His love for literary showed how much he contributed to the development of Russian glossaries. His top-notch writing and his examples in almost every literary genre made him reached the highest recognition, the father of the 19th-century Russian literature. Later in 1881, as an honor towards his works and life, the Russian Academy of Sciences created The Pushkin Prize, an award for a Russian who shows a distinction level of work in literature.

Gogol is known as the earliest great Russia novelist. He was born in Ukraine on March 31st in 1809. His talent in literature was already showed since he was still a little kid, when he helped to put on a performance of Ukrainian-language drama at a home theatre belonged to his uncle.

When he was 11 years old, he went to study at school of higher art in Nizhyn until he was 19. That school period was the time when he started to 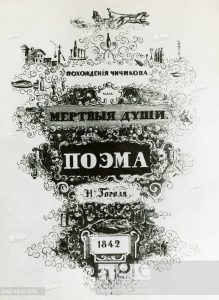 write. He was not a popular student, nor someone who was loud. However, he made some very close friendship with a couple of friends. With his character that later complemented with impersonation talent, he then considered being an actor. With a hope to be a famous writer, after graduation, Gogol left for Saint Petersburgh to publish his romantic poem “Hans Kuchelgarten”. He sent his work to may magazines and in return, it got ridiculed by critics. Being so angry, Gogol bought all of the copies he can found and destroyed it. His life then got back to the right track. He had his story published in a Saint Petersburg Almanac called Northern Flowers. He also started his friendship with Vasily Zhukovsky and Pyotr Pletnyov, who were also his mentors and later they introduced him with Pushkin.

Gogol was famous for his particular work, Dead Souls, a novel referred to as the Golden Age first great Russian novel. This novel tells a story about Chichikov who came to a small town to acquire “dead souls” from landowners. The word “dead souls” were used to describe the serfs that had passed away. Landowners must pay tax to the government based on how many serfs they owned but since the census was not regularly held, the landowners kept paying for all their serfs, including the one that had gone (dead). This great book was produced years after Pushkin’s death, an incident that left Gogol with a deep feeling.

Two of his most famous works are War and Peace and Anna Karenina. War and Peace is a historical novel telling a story about the time when Russia was being invaded by French. In the process of creating this novel, Tolstoy did deep research to gain information as close as possible to the truth. He did interviews with many people who experienced the period of French Invasion. He read all the texts that could support his writing – journals, letters, biographies, history books. This is why Tolstoy did not agree to call War and Peace as a novel but he was also aware that it is not a historical document either. Whatever it is, this book is admitted everywhere to be the masterpiece of the literature world.

Unlike War and Peace, Tolstoy called Anna Karenina as his first novel which was published in 1878. His ability to produce writing covered many themes – marriage, betrayal, faith, family – made this book as one of the most extraordinary literature work. In this novel, Tolstoy told a story about Countess Anna Karenina, the wife of Count Karenin. She had an affair with a bachelor named Vronsky who was willing to marry her if she left his husband. Anna could not bear the pressure if she was to be a rebel to the social norm. So Vronsky continued his social life and this made the Countess being oversuspicious that he was not being loyal to her.

This tragic story was written into eight parts, where there is a parallel story that also explores a very wide range of themes. Anna Karenina achieved many recognitions. It had been translated into English for at least 10 times by different press and publishers. It was also adapted into plays in theatre and opera, ballet and skating choreography, radio theatre, film, and television. The fact that people everywhere enjoy Tolstoy work, not only the book version but also its adaption work, make him deserves to be one of the freaking great writers from the golden age of Russian literature.