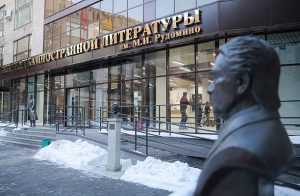 When you go to Moscow, the last thing you want to do is probably going to the library. There are many historical landmarks in Moscow, Russia that will keep you occupied during your visit to Moscow. Those and the long list of good shopping malls and markets in Moscow. Reading would not be something a tourist put at his or her itinerary.

But some tourists do like reading. They would love to check out some libraries in Russia. Russian literature is famous in the world and it has many enthusiasts too. In Moscow alone, there are 8 finest libraries in Moscow, Russia. If there’s time after a sightseeing tour, it’s always a good idea to check out these libraries. Russian libraries are world class and totally worth to visit.

Russian State Library has a long history. Over the years, it changes name several times. It named as Lenin State Library of the USSR before obtaining its current name. Their 46-million collections are in 367 languages. The books here are both domestic and international. The library occupies a historical building with the monument of Dostoevsky on its front yard.

To help finding a book you want to look for, there’s a comprehensive catalog system that will help you out. The library is open from Monday to Saturday, from 9 am to 8 pm. The library has a membership program too, with people as young as 14 years old can join the membership. There are 37 reading rooms in this library.

Margarita Rudomino All-Russia State Library for Foreign Literature specializes in foreign literature. It was established in 1921 by Margarita Ivanovna Rudimino. It started as s tiny library at first, with a collection of 100 foreign books in English, German, and French. It has since expanded its collection to 4.4 million collections in more than 140 languages.

Due to its smaller size, getting a book here is easier and faster than at Russian State Library. The library is one of the most important libraries in the world. A large number of their collection are of humanities, arts, and literature field. Their mission is to provide information from diverse sources to their reader.

Like its name, Russian National Public Library for Science and Technology offers wide ranges of material from engineering, science, and technology field. Soviet Union’s Ministry of Higher Education founded this library in 1958. The library is also a scientific research institute, with well-known scientists being its member. The library is open from Monday to Friday, 10 AM to 8 PM.

Although the library has “youth” on its name, everyone from all ages can visit The Russian State Youth Library. The Russian State Youth Library is young at heart in its interior. When you go to this library, you’ll notice its bright and colorful setting. A library doesn’t have to be a boring place. This way, the younger generation, especially children, would love to spend time at the library more. Children in Russia are encouraged to read in their spare time.

The catalogue of this library is considered small. Only 650,000 items, consist of books, newspaper, and many other sources. The Russian State Youth Library has a coffee room and also a foreign language section. Since this library is pretty unique, it’s recommended to visit here during your trip to Moscow. The library has long opening hours and it opens until late at night, from 11 AM to 22 PM.

National Research Nuclear University (MEPhI) has a scientific library worth considering. They have a large collection covering scientist and engineering field. It is one of the best and most advanced libraries in Russia. Their collection is comprehensive, from books to electronic materials. Their online database is also continuously expanding. This database stores scientific journal and publications for research purposes.

It’s also comfortable to read and browse books at MEPhI’s Science Library. There is a cozy reading room with WiFi access. Their service and information system are well-organized and modern. There are over 1 millions copy of books you can enjoy here. There are also computers to access the online database system.

So, those are 8 finest libraries in Russia. Visitors can choose whichever to visit, depending on what they’re looking for. If you want to go to an old and large library with traditional vibe, then visit Russian State Library. If you’re looking for a more fun vibe, visit The Russian State Youth Library. Students looking for academic books, journal, and publications, it’s a good idea to visit a university library.