There are many kinds of alcoholic beverages we can enjoy. The most common one is beer. You can have it with some meals, snacks, or just enjoy it while you are hanging out with some friends. Another alcoholic drink that many people love is wine. Everybody knows how drinking wine with some foods can produce an even better taste of the mixture. For example, it is best to have white wine when you are eating fish or chicken. While the red one will be best to match with the sauce of the meat you are eating because it will balance with the fat.

Besides those examples, another alcoholic drink that is named as many people’s favorite is cocktail. One of the famous cocktails is Caesar. This vodka-based drink is consumed the most in Canada. beside that vodka is its main ingredient, what are the other interesting things about Caesar? Here are all the facts about Caesar drink you need to know.

Interesting Facts About Caesar You Need To Know 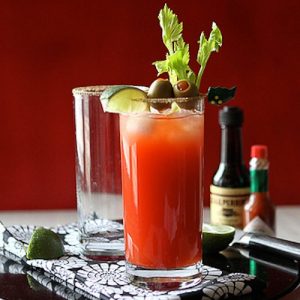 The Caesar was invented by Walter Chell, a restaurant manager of the Calgary Inn, a hotel located in Calgary, Alberta, Canada. At that time, there was a new Italian restaurant at the hotel and Chell was ordered to create a signature drink for that restaurant. So, he invented a drink similar to Bloody Mary but has the unique taste of spicy flavor. So, he mixed vodka with the juice of clam and tomato, as well as some Worcestershire sauce and some other spices.

He said this inspiration came from the experience in Venice. When he was there, he had spaghetti alle vongole, a spaghetti dish served with tomato sauce and clams. He stated that experience gave him the idea that the mix of clams and tomato sauce would produce a good drink. He spent three months to perfect the drink he invented. During those months, he served the drink to his customers and asked for feedback until one day one of his regular customer, an Englishman, gave a compliment for the great taste of the Caesar.

As soon as the launch of Caesar, it became the hit of the restaurant. In five years, it even got the spot as the most famous mixed drink in Calgary. Its popularity spread all through Canada that in its 40th anniversary, the Canadians launched a petition to make the Caesar as the national mixed drink. At the same year, as part of the celebration, the mayor of Calgary declared that day as Caesar Day.

At the same time, Caesar was invented, there was a company called Mott’s that was developing Clamato, the clam and tomato mixed juice. In the beginning, the sales of Clamato was low. But then, the condition changed when the distributor of Clamato found out about Caesar. Since the consumption of Caesar was high in Canada, it caused a significant effect on the sales of Clamato. The effect is very significant that in 1994, 70% of Clamato sales was the ingredient used in making Caesar.

Besides Mott’s, there are also other caesar mixes producers offering other products of mixed clam and tomato juice. One of the products is Walter Caesar, a product whose name is an honor to Chell as the inventor of Caesar. This product uses clam juice that is claimed to be ocean-friendly. Because of this, Walter Caesar is titled as Canada’s first caesar mix approved by Ocean Wise. This is one of the programs from the Vancouver Aquarium that works in promoting sustainable seafood in foodservice facilities.

Caesar is not only famous because of its distinctive spicy taste. Another fact about Caesar drink that you need to know is that this drink is popular as the cure of hangover. It is true that whether it works effectively or not has been questioned but at least it has a benefit to your body. In 1985, the University of Toronto released research showing that if you take aspirin with some Caesar, the drink will help to protect your stomach from the damaging cause of aspirin. It also states that it is more beneficial than drinking tomato juice.

If you want to try to make Caesar for yourself, you can follow this information. One of the facts about Caesar drink that you need to know is that there is a super-easy way to remember the composition of the ingredients. It is called a “one, two, three, four” rule. You need one shot of vodka, two drops of hot sauce, three pinches of salt and pepper, and four drops of Worcestershire sauce. You also need four shots of Clamato. The whole ingredients are poured into a tall glass rimmed with either some celery salt or the mixture of salt and pepper with some ice at the bottom of it. As the final touch, you are going to need a celery stalk and lime as the garnish.

Nowadays, you can find some variants of Caesar. Since this drink is popular for its spicy flavor, some variants add Tabasco sauce into the mixture. People sometimes do not use vodka as the base. They change it with gin, tequila, or rum. There are even some variants that substitute the vodka with beer. For these kinds, they are called “Red Eye”, “Clam Eye”, or “Saskatchewan Caesar”. There is even one with zero alcohol which is named “Virgin Caesar”. Among the ingredients that get substituted or added, Clamato is the only irreplaceable one.

Now we have learned all the facts about Caesar drink that you need to know. Just the fact that there is a drink that has a clam and hot sauce in it is very fascinating, right?