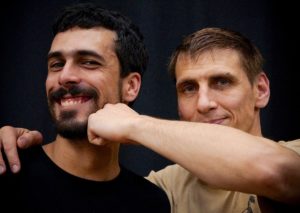 The uniqueness of a country is visible from the tradition adopted by the people of that country. Russia is a country that has a uniqueness towards the behavior of society. Russians are famous not easily give a smile to a stranger. However, Russian people have a high sense of humor, not easily offended and honest. If you are visiting Russia, your first obstacle is the language. Especially when meeting with people Russia must be hard in communicating. Also in Russia has a way of greeting Russian people. This article will discuss about 4 effective ways to greet Russian men. Please read Russian etiquette.

1. Use Good Russian Language and Correct

If you live in Indonesia and meet foreigners who speak Indonesian, how do you feel ?. Could it be nice? Like that, if you visit russia and meet russian man and you want to greet him, one of the ways is to use russia good and true. For those of you who want to stay in russia, you should learn russian language from now on. You should start from the simple word dahalu like a sentence to greet the Russian man with greetings. As:

By using their official language, Russian people will be happy and proud because their language is learned and used by foreigners like you

Although the Russian people never smile to strangers including you, there is nothing wrong if we say hello by saying “hello”. If in russian language “hello or hai” pronounced “привет” (privyet). This word is an informal expression, which if in english means “Hi” or can use this word in Russian Здравствуйте “(zdravstvuyte). If in Indonesian, this means “Hello”; literally “Stay healthy.”

In addition to using the word “hello” or “hi”, you can also greet a Russian man with a greeting at a certain time like:

As in English, good night’s greeting is in the form of goodnight and unisex at the bedtime, in the Russian language as well. For good night before bedtime, Russian people often say Спокойной ночи! [spakoynoy nochi] – Good night. See Common greetings in Russian for words you can use as a greeting.

In addition to using the word hello, hi or greeting, you can also use the word apology before asking or talking to the Russian man. One example :

After giving a greeting like the above words, you can also invite this Russian man to meet, of course by using the Russian language like: “Как тебя зовут?” (kak tebya zavut), which is an unofficial expression, or “Как вас зовут? “(kak vas zavut?), for his formal. This literally means “What is your name?”

3. Do not forget to say goodbye

After greeting and acquainted with russian man, and want to be separated then you should not forget to say goodbye. This greeting is very important in russia because as a token of appreciation after talking chat. In Russian, here are some goodbyes by using Russian language, such as:

In Russia, to say hello to Russian man by mentioning a person’s name, the Russians have several ways. One of them you can say with the first name and middle name (father’s name) someone, for example “Алексей Владимирович” (Aleksei Vladimirovich) and “Надежда Александровна” (Nadezhda Aleksandrovna). Names like “Алексей” (aleksei) and “Надежда” (nadezhda) are the first names or names used for calls. As for names like “Владимирович” and “Александровна” are the names of their fathers named “Владимир” and “Александр”.

However, if you are very familiar with the russian man, you just enough to call by his nickname or russian language ‘short name’ (сокращенное имя). Every Russian name has a familiar form of calling. For example:

Thus the explanation of 4 effective ways to greet russian men. This information is very useful for those of you who want to visit Russia. If you are going to visit the russia you should start from now take your time to learn russian language, so you can at least understand the words spoken by Russian people. Moreover, if you can communicate verbally or verbally, surely the Russian people there will appreciate you more. This is because they feel proud and respect the national language is used by foreigners like you. Other relationship focused articles you can read are Effective Steps How To Date a Russian Man and Effective Steps of How to Date Russian Women.