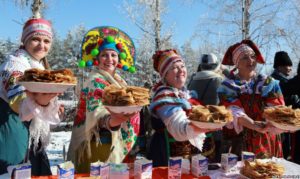 Russian Maslenitsa Celebration is like no others with all the festivities and of course, the rich Russian delicacies! After learning some facts about Maslenitsa and blini, let’s find out how Russian truly go all out celebrating Maslenitsa. Brace yourself for endless fun and meaningful experience you can expect from Maslenitsa.

First thing first, Maslenitsa is a week-long celebration before the Great Lent begins

Lent itself is a fasting period before the Orthodox easter. During the celebration, Orthodox Russian feast and have the last chance to indulge in worldly pleasure before fasting. Once Lent begins, they have to exclude meat, fish, egg, as well as dairy product from their diet. In order to further strengthen the religious side of one’s self, they would also avoid secular music, dancing, and even parties of any kind. Despite all the fun, each day of the seven days of Maslenitsa is devoted for different rituals that hold deep meanings for Russian.

1. Monday, the day to welcome all the festivities.

Russian Maslenitsa celebration always starts on Monday. On the first day of Maslenitsa, kids and grownups alike build a Maslenitsa doll out of straw. Next, they dress the effigy in old woman’s apparels. Then they place the doll on a pole and carry it around the village, singing all the way. That’s not all. They also bring the effigy on top of a snow hill to later enjoy sliding down the doll. Russian believe that those who slide down the hill more than once would have taller flax when summer comes.

Those with more money also start baking blini on the first day of Maslenitsa. Sticking to the tradition, the poor would have the privilege to savour the first pancakes. It is also a form of paying tribute to the ancestors and deceased relatives. Married women also go home to their parents’ house. At the end of the day, their husbands and their families would join them for the holiday meal.

Russian call the second day of Maslenitsa as ‘Zaigrysh’. It translates into the ‘game day’ in English. Staying true to its name, Russian celebrate Maslenitsa by indulging in fun activities. The streets will be full of people in festive carnival costumes, puppet shows, concerts, and even theatrical performances.

This is also a day singles may enjoy so much. Single unmarried guys usually go out on sleighs to look for their counterparts. It is true that one of the purposes of the game day is to matchmake the singles. Many of these couples would then get married on the Krasnaya Gorka. It is also known as the Red Hill holiday, which is the first Sunday after Easter. Traditionally, it is the time for Russian couples to tie the knot.

3. Wednesday, the perfect time to indulge in delicacies.

Wednesday is the day son-in-laws visit their in-laws’ house. They are there to enjoy the pancakes a.k.a blini their mother-in-laws make. Usually, the hosts also invite other guests. They celebrate and feast with of course the tasty blini and other meals. At the end of the gathering, the guests would sing songs to praise the hospitality they have received from the mother-in-law.

The fun does not stop there. People can also find tents on the street selling any kind of foods one can name. Should you ever find yourself celebrating Maslenitsa in Russia, don’t forget to try the famous Sbiten. It is a beverage made of water, honey, and also spices. You can also find people selling gingerbreads, pretzels, pies, nuts, and many others!

4. Thurday, when people all go out for the fistfights.

Thursday is the day all fun culminate. People will not go to work on Maslenitsa Thursday. But that doesn’t mean they are staying home either. People will go out for the traditional fistfights. The fistfight is a part of Maslenitsa to commemorate Russian soldiers who used to fight each other bare handed.

The rule of the fistfight is quite simple. “Never hit a man when he is down”, which is also an old Russian proverb. If one violates the rule, they will be dealt with severely.

5. Friday, time to treat the mother-in-law and family visit

It is also a special day for the newlyweds. The are requires to dress nicely and go out in decorated sleigh. They will visit the guests that have attended their weddings. They carry out the tradition to show mutual respects to friends and families alike.

6. Saturday, the sister-in-law get together

Russian truly value strong family bond. On the sixth day of Maslenitsa, young wives will invite their sister-in-law to win over their favor. If any of the sister-in-law is still single, it is common sense to invite some eligible guys over as well. This is also an important part of the tradition due to the fact the relationship between young wives and the sister-in-law might be tense.

It might have been so bad once that the Russian word for sister-in-law is ‘zolovka’. It derives from the word ‘zlo’ that means evil. While sister-in-law will call their brother’s lover ‘nevestka’. The word literally means the ‘outsider’.

7. Sunday, the day of forgiveness

The whole Russian Maslenitsa Celebration culminates on this day. During that day, people will go out and visit their friends and relatives to ask for forgiveness in case they have have caused the other party troubles. Then in the evening, they will go to cemeteries. It is the time when they bid farewell to the late relatives.

The climax of everything is when they put up the Maslenitsa effigy and burn it. They burn the stuffed figure to say good bye to winter and welcome spring. They they proceed with throwing the remnants of the festival especially the meals to the fire. Parents with young children will then tell their kids that the meals have to disappear so they can welcome the Great Lent.

The end of Maslenitsa celebration

The celebration officially ends on the first day of the Great Lent. It is called the Clean Monday, where people are rid of their sin and excludes forbidden meals from their diet. During the Clean Monday, Russian usually wash themselves in bath. The bath itself symbolises purification. Women then go back to the kitchen. They will wash the dishes and dispose the remains of the worldly feasts.