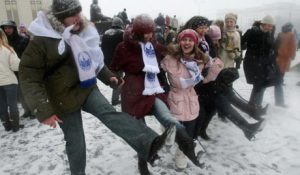 Brief History of St. Tatiana Feast Day in Russia – Tatiana Day or in Russian called Татьянин день is a religious holiday in Russia. This holiday falls on January 25 when viewed according to the Gregorian calendar and January 12 when viewed according to Julian. Tatiana Day is also designated as Russian Student Day because it coincides with the end of the first period of the traditional academic year. The date is also the end of the winter exam period with a two-week winter break.

Origin of the name Tatiana

The name Tatiana on Tatiana Day comes from a Christian martit from Rome named Saint Tatiana. The martyr lived in the third century when Emperor Alexander Severus was in power. Saint Tatiana who has the full name of Tatiana Prokopevna Egorova was born on January 15, 1879. Hari Tatiana was set in honor of Saint Tatiana who became a symbol of strong women in Russia.

Saint Tatiana has a life filled with various miracles, frightening feelings, and astonishing feelings. However, behind it all there are two important points of Saint Tatiana’s life, namely concerning his testimony as a martyr regarding faith in Christ and worldly podvig (exploitation of heriok).

Saint Tatiana was born to a Roman noble family consisting of secret Christians. The path of Saint Tatiana’s life since childhood is always consistent. Saint Tatiana always refused to marry and devoted herself only to church services that always fasted, prayed, became a nurse for those who were sick, and helped people who were in trouble.

In 1896, Saint Tatiana entered the Kazan-Glovinsky Monastery and lived for almost 30 years. Saint Tatiana lived there until Kazan-Glovinsky Monastery was closed. After the monastery was closed, Saint Tatiana returned home and lived with her sister. Then in 1937, a young community namely Kuznetsov, provided information about Saint Tatiana to the authorities. They accused him of involvement in the manufacture of handicrafts and blankets, received many people including “monastic hearings”, established intimacy with high-ranking scholars, and a large accusation of keeping years of gold reserves collected to help Tsar Nicholas.

When the Tatiana Day was established, Tatiana Day was only celebrated by students from wealthy families. The celebration began with a single inauguration ceremony at Moscow State University and continued with their respective programs of eating in the most luxurious restaurants. At that time there will be various gourmet foods, champagne fountains and wine that form the river. The meal made Moscow City, cities in Russia that has lots of festivals, turn into a street festival. The activity at Tatiana Day, most interesting winter festival in Russia, made Tatiana Day a place to show off their social status.

Today, as the number of universities increases and the student population increases and becomes more diverse, each student from different families begins to find other ways to celebrate Tatiana Day, most interesting winter festival in Russia. Until finally Hari Tatiana was no longer celebrated by students from wealthy families. Activities to celebrate Tatiana Day are more diverse, with parties on campus or small pubs by playing open-air games such as snowballs, skating, and drinking hot and alcoholic drinks. In addition there are also various performances and dances that can be witnessed by the general public.

For you students from Russia and want to experience the celebration of Tatiana Day in Russia, here are some terms or words that you must understand:

So much brief history of St. Tatiana Feast Day in Russia. All this information is very important for you to understand the culture in Russia. Russia always has a unique and diverse culture.