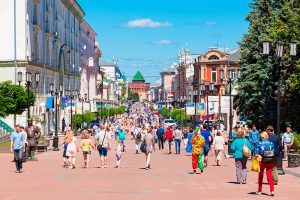 Because Russia is the largest country, of course this country also has large cities. Like Moscow and St. Petersburg. The two cities must have been familiar to your ears or maybe you have already visited them. However, have you ever heard of Nizhny Novgorod? Maybe many of you don’t know about Nizhny Novgorod. Then what is Nizhny Novgorod?

Nizhny Novgorod is the fourth largest city in Russia after Moscow, St. Petersburg, and Novosibirsk. The city is also the economic and cultural center of the vast Volga-Vyatka economic region, and also the administrative center of the Nizhny Novgorod Oblast and the federal district of Volga. Nizhny Novgorod is a city in the European part of Russia located at the confluence of the Oka and Volga rivers. The city was founded in 1221 and is located 400 km from Moscow. This city is also one of the most ancient trade and craft cities in Russia.

Nizhny Novgorod has an area of ​​673 square kilometers with a population of 1,297,600 in 2005. The city is also very beautiful like Moscow and Saint Petersburg. Lots of tourists who travel to this place, and many destinations that you can visit when you travel here. This place also has a lot of very interesting history.

Nizhny Novgorod is a beautiful city. Lots of interesting facts that you should know from the fourth largest city in Russia. And in this article we will discuss it in full. Here are 7 attractive facts about Nizhny Novgorod.

Nizhny Novgorod is the original name of this place. However, in 1932, Nizhny Novgorod was changed to Gorky. The Soviet Union changed the name of places in Russia to distance themselves from the very cruel Tsarist period. So they get rid of the place names that are related to the history of the country’s kingdom.

In 1932, Nizhny Novgorod was renamed Gorky. That is the name of the famous Soviet writer Maxim Gorky. He was the founder of socialist realism, and refused writing that was critical of the Soviet regime. He also received 5 Nobel prize nominations. However, the exact history is unknown, in 1990 this place was renamed Nizhny Movgorod. Did this happen because the residents were used to the name? Maybe.

As we know, Hollywood is a storehouse of famous films in the world. And it has a million highly accomplished actors. However, did you know that Russia also has holllywood? Yes, Russia has it. Russian Hollywood is Nizhny Novgorod.

Every year, Nizhny Novgorod was set for a number of films, including the Salt 2010 starring the beautiful and world-famous actor Angelina Jolie. When visiting this place, make sure you pay attention to the camera, because you never know when you are caught on camera. Don’t be surprised when your face is in a movie while visiting this place.

3. The First Soviet Tank Was Made In Nizhny Novgorod

Nizhny Novgorod also served as the most important military city in Russia. And at that time, the city was closed to foreign tourists. However, when the world had returned to peace, in 1991, Russia was no longer a closed country. And the beauty of the city of Nizhny Novgorod can be witnessed by everyone without leaving its dark history. Only one year old from the name of this city.

Nizhny Novgorod is a city with centuries of history. Nizhny Novgorod Kremlin is the main attraction of the city and something that is truly proud. The Kremlin was built in the early sixteenth century as a military fortress. The Kremlin is now used as a very unique open-air museum and is a popular tourist destination.

Rozhdestvenskaya Road is one of the city’s main streets where you can still see original mid-18th and 19th-century houses. Walking along the Rozhdestvenskaya road is a guaranteed way to get the perfect mood and you can feel the atmosphere of the past. This is certainly very difficult for you to get elsewhere.

Nizhny Novgorod is also known as the city of art. There are a number of interesting attractions and galleries in Nizhny Novgorod. The Blogger Bench is a monument to the Russian blogosphere. The monument looks like two benches in the form of a notebook that is joined by a sign @ internet. This site is large enough for 10 people and is equipped with free WiFi.

Then, there is the Kladovka Art Gallery located in the city center and holds concerts, master classes, entertainment shows, local theater performances, and local talent. And there is also an Upside Down House entertainment museum in the form of a house facing up.

Music is also very developed in this city. Lots of places that hold fantastic concerts. There are cafes that offer live music, including jazz. And this concert invited a number of famous Russian DJs and top Musicians. Besides Jazz, Many Residents Of Nizhny Novgorod Like Rock.

6. A City With Many Religions

7. Myth About The Ghost Station On The Metro

After the interesting facts above, it turns out that Nizhny Novgorod also has scary facts that are no less interesting. In 1993 a new metro station was built, Yamarka, between the Moskovskaya and Strelka stations in the Nizhny Novgorod metro system. Unfortunately, the funds for the construction were exhausted and the station remained a ghost station only for trains without a stop.

The Nizhny Novgorod community considers this station to be haunted and many ghosts are roaming the station. In July 1984, two workers were killed during the construction of the Moskovskaya station when the walls collapsed, and rumors said that the ghost of the worker was still haunting the metro line Nizhny Novgorod. That’s how the people of Nizhny Novgorod believe it. How about you? do you dare to visit this station?

Russia is the largest country in the world. Russia always presents various interesting facts from their country. there is a lot of beauty that you can get from the country that was once the superpower. Its natural beauty has been recognized by the world, its unique language, cultural diversity in its society, and the beauty of its large cities. You will never be tired of discussing interesting facts of Russian beauty and uniqueness. Likewise about Nizhny Novgorod.

Those are 7 attractive facts about Nizhny Novgorod. These 7 facts will make you want to visit them immediately. Because Nizhny Novgorod is one of the witnesses of Russia’s long history. There are so many historical places that you can visit on Nizhny Novgorod. Are you interested? Maybe you can spend your new year and vacation time here.