Islam is the second biggest religion in Russia. Three regions in Russia with the biggest percentage of Muslim are Ingushetia, Chechnya, and Dagestan, all of them are located in the North Caucasus region. Besides in those three regions, Muslims population is a population in Bashkortostan and Tatarstan, both located in the Volga Federal District. On the other hand, in Moscow, the capital city of Russia, Islam is a minority religion, where only 3,6% of its population profess Islam as their religion.

With the increasing number of Muslims of Russia, their needs to have places of worship where they can gather and do religious activities must be met. Now Russia is the home for more than 8.000 mosques. To get to the point of having the liberty to practice their religion and mosques built for them was a struggle. The condition of the Muslim community and mosques during the soviet union era and how they grew post soviet union are important things to know. So the next time you visit a mosque in Russia, you know the history behind it.

Important Things to Know When Visiting a Mosque in Russia

When we visit a place, especially important or historical places, it is good to know the interesting background of these places. The same thing goes for the mosque. here are some important things to know when visiting a mosque in Russia:

The Soviet Union consisted of 15 republics which 6 of them had a Muslim majority. During that time, Soviet authorities actively encouraged the citizens to disbelieve in the existence of a deity. While they were doing their best effort to establish communism, they still allowed religious activities in those 6 Muslim majority republics but in a limited way. the number of the operating mosque was decreasing significantly from 25.000 in 1917 to 500 in the 1970s.

In 1989, the Soviet official loosened up a little bit towards their religious restriction. They reopened some mosques that had been closed and formed some Muslim associations. They also gave permission for Imams education in the cities of Ufa and Baku. But they still ban religious activities to be held outside of mosques and Islamic schools and their very limited activities and facilities were all under the supervision of The Spiritual Directorates. These official governing bodies were responsible to give training to clergy and bring out spiritual materials. 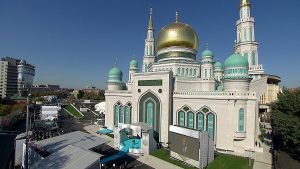 In 1917, after the Russian Revolution called the Bolsheviks, Lenin, the leader of this revolution, declared that Muslim Russian rights to believe and practice their religion, their right to have mosques and religious places are protected by the revolution, and that they were free and safe to be Muslim and to do their religious activities. This revolution was following the end of Tsarism. During Tsarist autocracy, a large number of mosques were destroyed and violation over beliefs happened many times.

At the end of the soviet union, there were some significant changes happened towards Islam. For example, the number of pilgrims to Mecca increased drastically. In 1995, there was a new organization called the Union of Muslims of Russia which focus was to improve understanding about Islam to stop Russian’s misconception about Islam. Islam rights were also guaranteed to be protected and safe by the Nur All-Russia Muslim Public Movement, a post-communist union which worked with Muslim imams in order to protect Muslims’ rights of politics, economics, and culture. There was also an improvement in education proven by the existence of the Islamic cultural center of Russia which also in charge of madrassa (religious school). In this period, all mosques, that were destroyed or closed before, had been renewed or reconstructed.

After the era of the soviet union was ended, Islam regained its place in Russian politics. To show the whole society support towards Islam, Russian president Vladimir Putin declared that both the building of mosques and the improvement of Islam education would be subsidized. He also encouraged the immigration of people who came from Muslim majority soviet union states and condemn any form of hate speech towards Islam, such as caricatures of Muhammad.

Moscow, the capital city of Russia, has around 300.000 permanent residents and estimation of 1.5 million of Muslim migrants. At this time, there are four mosques in Moscow. The main mosque in Moscow is Moscow Cathedral which located on Olimpiysky Avenue. this was the only operating mosque in Moscow during the soviet union era.

In 1904, designed by architect Nikolay Zhikov, the initial structure was built. Later there was a plan to reconstruct this mosque with one of the reasons was its position was deviated by several degrees from the direction Mecca. The new architect, Ilyas Tazhiyev, proposed to demolish the mosque and rearrange the stone on construction with the correct direction of Mecca. The demolition was executed in 2011 and its construction began in the same year. This was possible to do because the building which used to identify as cultural heritage in 2008 was removed from this list at the end of 2018. That was why it was not protected from demolition. This controversy marked The Moscow cathedral mosque as the first religious building that had been demolished in Moscow.

The new mosque was built in the same location as the old one and finally opened on September 2015. This building can accommodate ten thousand worshippers. The architectural ensemble of The Moscow cathedral mosque is magnificent. It has a huge dome and two main minarets which covered with 12 tons of gold leaf. Inside of it, there are many patterns and ornaments beautify the interior of the building, complemented with designs that use the color of emerald, green, blue, and white.

Worshippers can also enjoy the other beautiful details like the elegant main doors, the handmade carpets, and the glorious crystal chandeliers. This distinguished building can be enjoyed not only by worshippers but also by travelers. Just remember to wear appropriate clothing and a head scarf for women.

The historical background of Russia mosques is important to know so people understand the struggle of Muslim communities, especially during the soviet union era. The next time you visit a mosque in Russia, don’t forget these important things 🙂