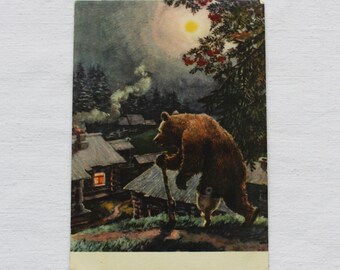 Cartoons are often seen as light, entertaining, and funny TV shows that are friendly for children to watch. Their storyline is also usually simple, with happy endings in the end. However, Soviet cartoons do not quite follow this stereotype! It’s not a surprise, really. Soviet cartoons were mostly made in the Soviet times, and cartoons used to be one of the ways the Soviet people tell stories about their dark and challenging life in that era, even to children. It is common to find creepy playgrounds in Russia. So, it’s not unusual to find cartoons with dark, gruesome and melancholic themes as well. Modern-day children may not even be allowed to watch these heavy cartoons! Look out, here are 8 Soviet cartoons that will bring back shivering memories.

1. The Adventures of Lolo the Penguin.

This cartoon was originally made in 1986—a time when the Soviet Union still existed. In fact, this was a collaboration between Japan and the Soviet Union, directed by two people from these respective countries. When you see the title, you might think of the daily life of a cute penguin with many funny animated scenes. Well, that’s exactly how the cartoon begins, a happy-go-lucky fable. But it doesn’t take long before the cartoon turns very dark and brutal, involving how poachers try to hunt down and kill Lolo the penguin and his family. It even features violence and blood. It’s so dark that this cartoon is heavily edited before being released in other countries outside of the Soviet Union. Not exactly a penguin cartoon you want to show your children, don’t you think?

Under Yesteryear’s Snowfall is a cartoon made by a Soviet filmmaker, Alexander Tatarsky, released in year 1983. This cartoon has a really poetic title, don’t you think? Let’s dive in to learn what this cartoon is about! It’s actually a clay-animated show that, at first, seems like the perfect watch for a little winter TV-time. But be warned, it’s not a typical holiday classic for children. The narrator of the cartoon is confusing from the start, and the storyline is all jumbled and bizarre as well, such as a greedy man who transforms into many other creatures while arguing with the narrator himself. This absurd, peculiar nature of the cartoon actually makes it pretty iconic even to Russians today, with a touch of philosophy of life.

Which child doesn’t adore dinosaurs? Children have always beenn intrigued with these giant, magnificent creatures of different shapes and sizes. This is how The Dinosaur Mountain, a cartoon made in 1967, starts out at first. Audience might think it’s a light-hearted kids story about dinosaurs. However, soon after getting started with the show, audience will be on the edge of their seat watching how a baby dinosaur struggles to come out of his egg shell, to a point that the cartoon sounds so depressing and agonizing. It is symbolic of the harsh Soviet life back then. Adults might even feel that it’s heart-wrenching. If you feel like you’re emotionally tough enough, perhaps you might challenge yourself to watch this one.

This cartoon comes from 1977. The overall plot of the story already sounds too heavy and non-kids-friendly, it’s about a maniac named Baba Yaga who turns two boys into pathetic trees. It doesn’t end there, the mother of these two victim boys tries to get her sons back by gettin even with Baba Yaga. Since Baba Yaga himself is a psychotic maniac, the mother must take extreme measures to save her sons—and by extreme, we really mean frightening, cruel ways. The animation and sound from this cartoon, although made in the 70s, are haunting enough that adults with faint hearts might not be able to watch this without getting shivers all over their body. Yikes!

5. The Flower of the Fern

This cartoon is created in 1979 from a story by a Soviet writer, Gogol. Gogol himself was acknowledged as the Soviet master of horror genre, so can you imagine how creepy this cartoon is? This cartoon also tackles the theme of horror, complete with devils, mystic creatures, and not to forget, a goosebump-inducing background music. Both children and adults are advised not to watch this one on their own unless they are challenged enough!

Scary cartoons don’t always have to hold a horror genre, take a look at this one from 1973, called Dandelion. It’s a stop-motion that is intended to teach kids life lessons, although, well, this cartoon does it in a gloomy, depressing way. It’s a philosophical story of how a little boy with big dreams gets a vision of his future in front of him. The vision is given by three gnome creatures that allows him to take a peek at different stages of his life. It even involves heavy themes such as death, prison, murder and so on. Although it ends up to be just a dream, the storyline is still pretty depressing and bitter, and might got audience thinking deeply about their own life after watching this.

A fan of dystopian movies? Perhaps you might want to check out this cartoon, Pass, from year 1988. This cartoon is created based on a Soviet story and poem. The setting is in an uninhabited planet where some characters got stranded after a spacecraft accident. The characters must fight their way for survival while facing threats from enemies as well. People have described this cartoon as extremely dark, with both the animation and music being quite frightening, unlike any ordinary children’s show.

Animals always have a way with children. Children seem to love cute, adorable animal characters from cartoons, don’t you think? But don’t let your children watch this one! Bear the Lime Foot, back from 1990, is a remake from the kids-friendly cartoon 6 years prior to this one’s release. This one is a more twisted, morbid version of the cute cartoon. The main character is a wild bear who doesn’t have a very nice fate—its leg was cut off, cooked, and then eaten by a psychotic couple! But the horror doesn’t end there, the bear is out for revenge. After replacing his leg with a wooden one, he hunts down the couple and things get worse from there. Still dare to watch this one?

So, those are the 8 Soviet cartoons that will bring back shivering memories, especially for Russians who have lived in the Soviet era and might remember these cartoons growing up. Do you dare to watch these? Or have you watched them and still have the guts to rewatch them now? Horror lovers will surely love these cartoons along with other Russian horror movies. Either way, these cartoons are filled with heavy philosophical themes that make their audience ponder about the deeper meaning of life.