A playground is a place where your kids supposed to play and have some fun. Most Russian public playgrounds in big cities are well-maintained, and people of all ages love to visit them. It is no wonder why visiting playgrounds is one of the Russian kids’ favorite activities, especially during holidays.

There are some playgrounds that seemed in contrast with the ones that was well-maintained by the local officials. Some of them are quite old, dating back since the Soviet era. And some others are made by someone who (possibly) wants to try to cheer up their kids, but they found that their works are screwed up. In the end, those playgrounds are almost entirely abandoned, vandalized, and left to the elements. The creepy atmosphere surrounds the playground, repelling children and adults alike from visiting it.

Here, we will take you on a short tour to eight creepy and annoying playgrounds in Russia. Some of the might gave you some nightmare fuel, better be ready!

1. A Princess Sitting Atop of A Giant Petal 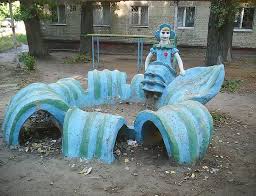 Is that Elsa from Frozen film? Or is that Cinderella? She looks awful!

This playground is said to be located in the city of Saratov. This creepy looking princess seems to have a really serious heartbreak caused by her loved ones. Her eyes are swollen, her heart bleeds, her feet are chopped off. Just by thinking about seeing this wicked princess in the middle of the night, it already gives me goosebumps.

Treat your woman well, or else, she will feel the way that this princess does. Here you can learn more about things you should never do while dating a Russian woman. 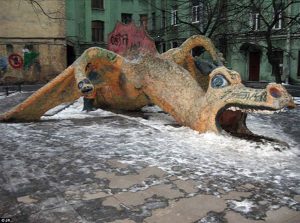 This strange mutated dragon seems to have come out straight from the Chernobyl reactor number four. It has a big jaw in its big head, with an extra pair of heads on each of its wings. This dragon seems like it has been grounded and no longer able to fly.

Its bizarre appearance will creep every kid of all ages. Except if you are about to ride on top of it, carrying sticks while pretending that you have slain the dragon in front of your kids.

This dragon nestled in a playground, somewhere in the city of St. Petersburg. If you have no exact purpose to visit this playground, then don’t bother.

We know that picking mushrooms is one of the Russians’ favorite activities to spent their free time. But what would you do if you stumbled upon a mushroom with a face like that?

This cringe-faced mushroom was not a playground exhibit, but it was a decoration for someone’s yard, somewhere in Vladivostok. We don’t really sure about the reason why the house’s owner put this mushroom in front of his yard. Whether it was used to scare off pesky neighbors, burglars, or spies, maybe.

4. Masha and the Bear Statue

Every Russian knows about this cute couple between a little girl and a big bear. But after seeing this statue, I’m pretty sure that the bear is about to eat her.

This statue is located in a playground, somewhere in Russia. There are few details about this playground, and none of them stated their exact location.

The English can no longer brag their Stonehenge since Russia has its own Stonehenge by now, located in the vicinity of the city of Tula. Although it is not as big as the one in England, still, it is made of stone and put in a circular formation. And it also has a dog, bird, and other animal sculptures hanging on some of its stones. A decent decoration.

But despite all of its features, this Stonehenge is not quite inviting. Even for children. It must be badly vandalized by now, and its iron railings would have been covered in rust. You do know what kind of danger lies on a rusted iron. A slight scratch of it could make even a healthy kid taken to a hospital.

This pig could have been drinking too much vodka. Or maybe the sculptor did. But hey, this pig is still cute isn’t it?

If you traveling across Chelyabinsk and found this playground by luck, come by to play with this pig. Don’t worry, it won’t bite you.

If people from the past put human’s heads on a pike to deter enemies from their settlements, then putting monkey heads on a playground is a more appropriate way to deter children from visiting that place. But if that place was not for children, then what it is made for? A horror film?

But if there’s a kid brave enough to play in this playground, then his chance of avoiding park bullies will be greatly increased by fifty percent. Guaranteed. No worries would have come to that kid since there are monkey heads that are always watching. Keeping bad kids at bay by fueling their nightmares.

8. There is No Ground on This Playground

It has been a fact that neighborhoods in Yakutsk are covered in thick layers of snow almost the whole year round. Every time the snow melts, its water will flood the streets. In this playground, the flood water will cover the ground with murky water, hiding potential hazardous objects underneath its surface. Its height could reach as high as the ankle, or maybe it could reach an adult’s knee-high when the are lots of melted snow. Here are some facts about Yakutsk, the coldest city in Russia, if you want to learn more about the city.

What makes things worse is that there are almost no local government officials who cared about this playground. Some even said that this playground is not their concern. But whatever it is, people should have to pay more attention to public places, especially if those places are a place where children came to gather and play.

And there they are, eight creepy and annoying playgrounds in Russia. Even though these playgrounds seems creepy, doesn’t it makes them as perfect spots for Instagram feeds?