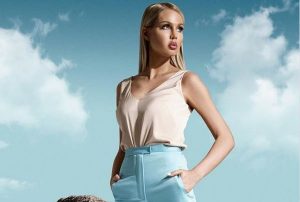 For those of you who haven’t heard about Maria Pogrebnyak, here’s a bit introduction to her. She is a former Russian reality TV star. She married Russian striker Pavel Pogrebnyak who used to be a striker at Reading and Fulham. It can be said that she’s one of the premier league’s WAGs (Wives and Girlfriends). If you are interested in football, check out the popularity of football in Russia.

She is most famous because of her body, which is very skinny. She is reported to have size triple zero. She often updates her Instagram followers about her body. Because she is so thin and skeletal, many people accused her of being anorexic and unhealthy, which she denied. She said in several interviews (and social media post), about her secret how can she have that thin figure.

Also, read about the beauty secret from Russian women.

1. Work out all the time

She said she goes to the gym routinely, especially after giving birth to her children. It’s not a secret that working out can help you burn out calories hence you could lose weight that way. If it’s true that her skinny figure is a result of a rigorous workout, then Maria Pogrebnyak must have dedicated long hours every day to burn any calories she managed to gain from eating before.

2. Her diet is normal, minus meats, dairy food, and junk food.

Maria Pogrebnyak also watches what she eats. According to an article on the Daily Mail, she stated that she eats normally. She does cooking a lot especially because she said her husband eat a lot. The family every day sit for dinner and afterward would have cakes and tea. She stated that she can make several kinds of cakes, such as Russian cakes and cupcakes.

She prohibits herself from eating junk food. And for that, we all can agree with her that junk food is never healthy. She also drops meat and dairy products from her diet. This kind of diet can dangerous if done excessively. She reported losing 24 kg by such diet restriction and had to stop because it affected her health.

Maria Pogrebnyak said that she drinks a lot of water on a daily basis. Drinking a lot of water is one of the scientifically proven habits that could lead you to a weight loss. Water helps your metabolism. It aids the removal of fat by-products and also make you full, especially if you drink before eating. You can definitely follow this tip.

4. Be an active person

Maria is a wife and a mother of three. She is also a designer. Every day she juggles between her family life and her work. She delivers her children to school and their extracurricular activities. She cooks and helps with her children’s homework. She said she only had time for work after all the children sleep. She admitted that she only sleeps 4 hours every day. This is actually an unhealthy habit, human needs at least an 8-hour sleep to be well rested for the next day.

Her last secret is kinda cheating. in 2017 she shared a photo of her on social media where she showed tubes attached to her belly. Apparently, she was undergoing laser liposuction at Beverly Hills. She got a huge backlash over her decision to get a liposuction. Many thought that she was already too skinny, there was no need for her to undergo such a procedure.

Although many regretted her decision for liposuction, there’s no denying that the procedure is the most effective if you want to lose weight. It’s also fast and you can see the results immediately. However, not many can afford this treatment, as usually, the cost is expensive. If you’re tight on budget, it’s better to lose weight in a natural way.

So those are the 5 secrets of Maria Pogrebnya skinny body. Let’s just say it’s a little bit fishy. Her body weight is not normal, and it falls into what people would call an unrealistic beauty standard (Read about Russian beauty Standard to find out more). My advice is not to fall to the same skinniness as her, because it’s definitely unhealthy. At 5’7″ and 42 kg, she is categorized as underweight, therefore, it’s unhealthy.

If you want to lose weight for health reasons, then it’s recommended to stick to healthy habits instead. Such as Eating less and exercising.

The secret of losing weight, instead of not eating at all or eating very little, is simply eating less. A harsh diet never ends well. You will end up eating more on a cheat day. The key is to start small. If you usually eat two burgers a day, try eating only one instead. Built a habit gradually until you get used to not eating junk food at all. To make your diet interesting, try cooking Russian food that can help losing weight.

You can also try to switch some of the food you ate into a healthier alternative. For example, substitute white rice with brown rice, cook fish instead of red meat, and most importantly, eat a lot of fruits and vegetables. Your eating schedule also counts. Eat a full breakfast, a healthy lunch, and a balanced dinner. Do not eat before sleep and limit snacking.

Last but not least, be kind to your body. There’s a saying “treat your body as a temple”. Do not succumb into unrealistic beauty standard that is not good to both your mental and physical health.