When we are talking about space, the first thing we remember must be the moment when the first person landed on the surface of the moon. The grand moment of landing on the moon happened on July 20, 1969. That historical moment was done by Apollo 11, the United Stated first crew that completed the mission.

We know for sure that there are many preparations needed for astronauts to be sent on a mission. They must go through training. Another key to the success of fulfilling a mission is great equipment. One of them is the spacesuit. Just like the United States’ astronauts team, Russians also made and have their spacesuit. So, what kinds of spacesuits are worn by the Russian space astronauts? Let’s find out more about that!

The Kinds of Russian Spacesuits

The first Russian spacesuit worn by the Russian space astronauts is the Orlan spacesuit. This spacesuit was built by NPP Zvezda, a Russian manufacturer specialized in making space surviving devices. The Orlan suit has been worn in some spacewalks, a term for the activities astronauts do outside of their spacecraft far away from the earth’s appreciable atmosphere.

In general, the Orlan spacesuit has the same construction. The whole space suit is semi-rigid while the torso part is solid and the arms are flexible. It is relatively easy to put on the suit. The astronauts can get into the suit through the hatch on the back and in five minutes, they will be completely dressed on the spacesuit. 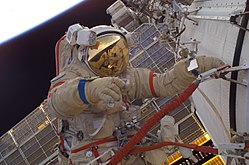 Orlan Suit has several models. They are Orlan-D, Orlan-DM, Orlan-DMA, Orlan-M, which designs have been claimed as space-rated. There are also some other models, such as Orlan-GN, Orlan-T, Orlan-V. The astronauts wear those kinds of models for training and underwater used. The original one was designed to be used on the Soviet Lunar program, programs by the Soviet Union that has a purpose of landing a Russian on the moon. The short operation time of the initial model (only two and a half hour) was the reason this model was ended up abandoned. A longer operation time comes with the newer model. For example, the Orlan-D model has three hours of operation time and it expanded more with the Orlan-M model, which has nine hours of operation time.

The producers or creators of the spacesuit have not only done improvement for the operation time part. But they also improved the power sources needed by the spacesuit. In the beginning, there was an umbilical tether to link the Orlan models with the spacecraft. This link is made to supply power to the spacesuit, as well as to communicate with the astronauts wearing it. As time went by, the Orlan-DM and the next models did not need any link to support its operation and are self-sustaining.

Orlan-MK is the latest version of the Orlan suits. The Orlan suits have the Portable Life Support System on the backpack that has radio-telemetry equipment in it. There is a computer inside the radio that would process data from the spacecraft system. It will then give the astronauts a warning if a malfunction is happening.  It will also display the contingency plan on the LCD screen on the right chest of the spacesuit. Improvement has been made for the Orlan-MK. The radio computer was removed from this model and in 2009, new equipment was installed.

The Russians astronauts are not the only people who have worn the Orlan suits. China imported 12 of the suits in April 2004. One of China’s space program is Shenzou 7. During this program, Liu Boming, the main crew of Shenzhou 7, wore the Orlan suits to assist Zhai Zigang on the spacewalk.

The second Russian spacesuit worn by the Russian space astronauts is the Sokol spacesuit. This suit is very interesting because it is not made for a spacewalk or other extra-vehicular activities. Sokol suit is the rescue suit the astronauts wear to keep them alive when an accidental depressurization happens in the spacecraft.

The Sokol-KV2 is the newest version of the Sokol Suit. Just like the Orlan suit, this one is also manufactured by NPP Zvezda. This suit has two layers, the inner and the outer layer. The inner one is made of rubberized polycaprolactam while the outer is made of white nylon canvas. The material of the visor is polycarbonate and the astronaut can open it. Unlike the removable gloves, the boots are integrated with the suit. The astronauts can make some adjustment on the suit thanks to the straps on the arms, legs, chest, and abdomen.

There is some equipment to find on the abdomen. There are electrical cables on the right part while on the left part, there are tubes for air and oxygen. At the center of the chest, there is a relief valve in which the air and oxygen exhaust through. The same valve is also responsible to control the pressure of the suit. This suit is also equipped with a life support system that looks similar to the scuba equipment. Although it consumes a high level of oxygen, the life support system is still acceptable since the purpose of the Sokol suit is for emergency only.

Soyuz 11 is one part of the Soviet space program. This is the only manned mission that boarded Salyut 1, the world’s first space station.  This mission consisted of three crews. A disaster, where an unplanned pressure drop happened in the crew capsule during the re-entry preparations, killed the three of them. Based on this accident, the commission of the investigating government suggested that in the future, all crews must wear the pressure suits during the launch, the docking, and the landing, which considered to be the mission’s critical phases. As the responsible one of making the suits, NPP Zvezda then created a pressure suit based on the existing Sokol pressure suit.