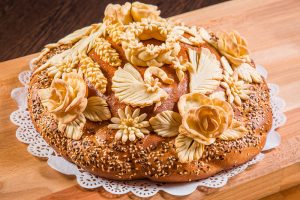 Every country has different specialties. And food is always able to become an icon of a country. In fact, many countries are known for their unique or delicacy. And another uniqueness of food is its ability to change one’s mood. And all food is made because of a background. Food not only contains good taste, but also contains messages and history.

Every food must have its own message. There are separate values ​​of food. And lots of foods that have a long history, but we often ignore them and just focus on the taste. Even though the history of a food contains the value and message that the maker wants to convey. And the values ​​contained in a food are an extra value that you can enjoy too.

Tok chok is one of the snacks that are very popular and favored by the Russian community. Tok chok comes from Altai. Altai is the name of a federal Russian subject area. Altai people really like tok chok as a snack to fill their leisure time. And these snacks are also very healthy. Tok chok is a food made from pine seeds which is pounded with wheat seeds. This Altai snack is also often used as a dessert. Tok chok is a healthy snack that contains high protein because it is made from natural ingredients. However, you don’t need to doubt the taste. Tok chok has a very tasty and slightly sweet taste. And this food is very well combined with warm tea.

Not only has good taste, it turns out tok chok also has specific values ​​according to the Altai community. Tok chok is not just food. But there are some messages and hopes that are stored in them. Tok chok is made into several forms. In Altai, animals are the most popular form of tok chok. And Altai people very often form tok chok into a bear or turtle form. And it turns out that this is not only for the unique look of the tok chok, but there are hopes and messages contained in it. Bears symbolize the strength of the Altai people, and turtles imply wisdom. They hope that the Altai community or themselves will always have strength and wisdom. Very unique, right?

All people who have visited Russia or who are very interested in Russia will know about this food. Blini is a very popular food in Russia. So you are very easy to find if you want to try it. If you don’t know what this is, you are a Russian pancake. But of course this blini has its own peculiarities that make it different from ordinary pancakes. In terms of taste and form you will definitely love it and will miss it.

Blini is made from wheat flour, yeast, and milk. The milk used can be kefir, sourcream, butter milk, or milk cream. The shape of the blini itself is like a French crepe, round and thin. Blini is usually served with red or black caviar on top. Over time, the contents and topings are increasingly diverse. Starting from berries, raisins, smoked fish, meat, and much more. If you are a fan of sweetness, you can try it with stuffed jam or raisin jam. dna if you are a lover of savory taste, you can try this with a fill of meat or fish.

The thinner the blini the better. And many say that thinness is what makes it difficult to make blini. Besides that, it turns out that we also have specific values. Ancient slavic people made this blini as an offering during certain ceremonies. In addition, until now this is a food that must be eaten by mothers who have just given birth. This is truly a unique tradition. And it turns out, they consider blini as a symbol of the sun and a fortune. This round, warm and golden blini makes it look like the sun. Blini not only has a unique taste and form, but is a symbol of the sun and luck for the Russian community.

Russia has many types of bread. And one of the most popular is karavay bread. Karavay is a round brown bread with a variety of topings on it. For centuries, karavay bread has become a symbol of fertility and prosperity in Russia, and this round bread has a special role in Russian society because it is considered to symbolize the Sun.

Karavay is used as a special food during weddings and funerals. The tradition of making karavay bread for marriage is still valid today. In ancient times, this task could only be entrusted to a married and happy woman, and had obedient and obedient children. Ancient Slavs believed that the woman was able to transfer the happiness of her marriage to a new partner through karavay. Meanwhile, the task of placing karavay in grills is only permitted by married men.

The bigger caravay, the more likely the new partner to live happily. Sometimes karavay is made so large that when it is about to be lifted from the grill, the chef has to take apart the stove. Wedding karavay must not be bitten or broken. The bread can only be kissed three times. Karavay was then cut at the wedding banquet. Interestingly, deductions can only be made by a child.

Karavay was also made during the funeral ceremony. This bread was made before the funeral and at the time of the ceremony of placing the coffin. After burial, karavay is served and everyone attending the funeral will get a piece of karavay. Interestingly, karavay burial is no different from karavay marriage. And if the deceased is a young single man, bread is like the attribute of marriage symbolizing the union of the man with the earth. Wow! Karavay has a very important role in the life of the Russian community.

Those are 3 russian foods that may contain specific values. Every food is always has a uniqueness. And if you visit rusia, trying the 3 foods above is a must. You will be impressed with the taste and the story behind it.