One of the things that we cannot miss when we are traveling is to taste the local cuisine of the city/country we are visiting. Why? Because each country has its traditional foods that display unique characteristics we will not find in other foods. For example, is Indian foods. The first thing pops up in our mind when we hear about Indian foods is its taste. They are famous for their rich flavor that comes from the generous spices used during the process of making it. The various kinds of spices mixed during cooking Indian foods are also the reason these foods always look colorful.

Just like Indian and Italian foods, Russian foods also have their uniqueness. When you go to Russia, you will notice that Russians love Smetana, a type of sour cream you will find in several Russians’ meals. So, why do several Russian food recipes contain Smetana? Let’s find out about that!

Smetana has been a part of Russians cuisine for a very long time. Even famous writers such as Nikolai Gogol and Leo Tolstoy mentioned this beloved sour cream in their works. We can only imagine that Russians’ love towards this dairy product has started a long time ago!

Since Smetana has been a part of Russians’ life since hundreds of years ago, no wonder that many Russians grow accustomed to making home-made Smetana. Turn out it is not difficult to make this sour cream. You only need two ingredients: 2 cups of whipping cream (make sure to use the one with heavy cream) and 2 tablespoons of natural yogurt.

All you need to do is put both ingredients into a bowl and mix it until the texture is smooth. After that, place the whole mixture into a jar and cover it with a cheesecloth. Leave the jar at a warm place for 24-48 hours. Then, keep it in the fridge for a couple of hours and you will get the texture gets thicken.  There you have it, your home-made Smetana!

Another reason why several Russian food recipes contain Smetana is because of its flavor. The mixture of the whipping cream’s light sweetness and natural yogurt’s sourness makes Smetana suitable to enjoy with many dishes. Its taste enriches several Russians’ foods such as Borscht (beetroots-based soup). Some salad recipes use Smetana as its dressing. This sour cream also makes dumplings even taste better. The fact that Smetana goes great with many kinds of Russians dishes shows that its flavor complements many recipes of Russians food.

Many Russians take advantage of the Smetana’s flavor. When they do not have the best or the fanciest meals to serve at their tables, they will serve the sour cream along with the meals. That way, even the simplest foods will taste much more delicious!

When you are inviting some of your friends to have lunch or dinner together, as the host, you want to make sure that everybody goes home with a full stomach. Especially when you are in Russia, you want to show what Russians famous for, its hospitality. One of the easiest ways to make sure that all of your guests enjoy a bountiful amount of delicious food is by serving it all with Smetana.

It is guaranteed that you will not be hungry if you have your meals with Smetana because there are 20 grams of fat in every 100 grams of Smetana. When you do not have this sour cream ready at home, you can have mayonnaise in exchange. But, if you want to a healthier option, it is better to stick with Smetana.

So far we have learned how easy it is to make Smetana. We also know that Smetana tastes great and is perfect to fill up your tummy. Is there another reason why several Russian food recipes contain Smetana? The answer is its versatility. You can enjoy it for breakfast, lunch, and dinner.

In the morning, when you have some pancakes, either Syrniki (quark pancakes) or Blini (wheat-based pancakes), you can use Smetana as the toppings or the fillings. When you are having lunch in Russia, you will find some kinds of soups, such as Okroshka. This soup has a mixture of raw vegetables, eggs, cooked potatoes and meat (beef, sausage, or ham), and kvass (a fermented black bread non-alcoholic drink). 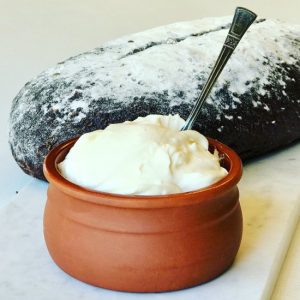 Another kind of soup common to find in Russia during lunch is Solyanka, a thick soup that tastes spicy and sour. Besides those two soups, do not forget the famous red sour soup, Borscht. You can imagine that each soup has its distinctive flavor but Smetana adapts very well with each one of it and makes it tastier!

At dinner, you can choose some of the Russians’ famous foods. The first option is Pelmeni, Russians’ dumplings filled with meat (pork, lamb, beef, fish, or other meats) or mushrooms. The spices are very simple, which are salt and pepper. The second option is the Pierogi. In a glance, this dish is similar to Pelmeni because they are both dumplings. But when you eat it, you can taste the difference. Pierogi usually has a potato, cabbage, meat, and cheese as its filling. What makes those two dumplings very special is the fact that both served with Smetana!

There is also another option for your dinner. This dish does not use Smetana as its topping or filling but as the sauce. This dish is Beef Stroganoff. This delicious food has sautéed pieces of beef in it. The meat is served with Smetana sauce. Some people eat it with some fries, others enjoy it with some rice.

Now that we know the reasons why several Russian food recipes contain Smetana, would you try to make some home-made Smetana?