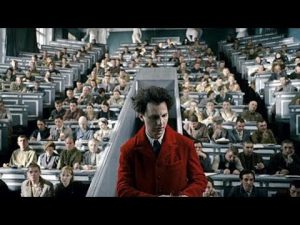 It’s not a secret that Russia is heavy on censorship, especially during the Soviet time. Movies included, there are a number of titles not allowed for distributions in the country. Some are allowed, but even then, the Russian public still considers it inappropriate and scandalous. What are Russia films that were considered too scandalous? These are some titles to check out:

Leviathan, despite being too scandalous in Russia, was receiving many awards abroad. Talk about Golden Globe and Academy Awards among so many. The fact that it receives many awards doesn’t impress the government enough to let the movie being screened in Russia. Especially since the movie won awards because it shows the west the realistic portrayal of Russia, good and bad, but mostly bad.

Leviathan set in a Russian small town governed by a corrupt mayor. One day he wants the land owned by an average citizen. This citizen doesn’t want to move away from their land, especially with only a small compensation. He also suspected the mayor had a deal with the company in which the deal would greatly benefit himself. So the citizen, with the help of his lawyer friend, try to fight the government and get some justice. And it’s not easy since the corruption exists in all level of the government.

The corruption isn’t the only thing that makes the government doesn’t like the movie much. It’s also because of the amount of vodka in the movies. It looks like what Russians do is drink and gets drunk whenever the time allowed. If you want your country to be presentable in an international movie scene, you certainly don’t want to portray a nation full of alcoholics. Also, check out more about controversial Russian movies.

Matilda is a 2017 Russian movie about the affair between Tsar Nikolas I and the ballerina Matilda Kshesinskaya. Tsar Nikolas I met Matilda when she’s 17 and the tsar was only a crown prince. They developed love and lust for three years until the death of Nikolas’s father, his coronation, and his wedding to the tsarina Alexandra Fedorovna.

There are many reasons why this movie is too scandalous to be screened in Russia. First, it’s from the movie scene, which no short of nudity and adult scenes. But most importantly the movie didn’t go well with the government and some of the people because of the inaccurate history the movie tells. Some people also consider the movie an insult to religion. This movie is your go-to if you’re interested in Russian historical movies.

Even if you’re not Russian or maybe even hate Russia, you will still agree that this movie is beyond sick. The veteran moviegoers, who’re usually are open-minded toward these sort of movies, will also feel uncomfortable watching Cargo 200. Cargo 200 is not at all about Russia, so thing like “distortion of history” or “politically offensive” isn’t the reason why the movie is banned.

It’s because the psychotic main character, who throughout the movie does some actions that make your stomach uncomfortable. He kidnaps and rapes an underage girl, brutally kill and mutilate, and playing with dead bodies. Not only that the audience is not impressed, after this movie, many actors even refuse to work with the director.

4. The Death of Stalin

The Death of Stalin (2017) originally got approval from Russia’s Ministry of Culture to be distributed in Russian cinemas across the country. However, two days before the government decided to change their mind. They deemed inaccurate portraying the power struggle in Soviet after Stalin no longer ruled. The Death of Stalin was never released in Russia.

The Asthenic Syndrome is deemed inappropriate for its obscene talk, which is considered scandalous in Russia at the time. The director is Kira Muratova, the only female director on this list. The Asthenic Syndrome itself is an interesting movie. There are two parts, with each tells the unrelated story from each other. One shot in black and white, one in color.

Dau takes so long to finish that it’s a controversy by itself. The production of the movies involves the construction of a gigantic set called the Insititute. Hundreds of actors live 24 hours on set like it’s a real village in Soviet Russia. Since the story in the movie spans 30 years of Soviet history, these actors live just like how people live during that time. For an easy watch, check out Russian cartoons with Soviet feels in them.

After years of filming, the movie is set to be screened in 2019. This art, an expeimental cinematic project is carried by Russian director Ilya Khrzhanovsky. If you’re a fan of the artsy movie, you can give this movie a try. This is not your regular 2-hours movie. Dau is a short of Landau, the surname of Russian scientist and Nobel Prize winner Lev Landau. The movie is about his life.

The Russian government not only calls this movie scandalous but politically incorrect. It’s a movie about Khaibakh massacre during the Chechen conflicts from the eye of the main character Daud and Seda. Russia thinks this movie will create ethnic friction and hatred, although the makers insist they don’t intend to promote hatred. The movie even portrays the humane side of many Russian soldiers, who refused to kill Chechen and Ingush civilians when ordered so.

The Russian government also denies the massacre, despite many Russian human rights group considers the fact portrayed in movies generally acceptable. Although it can’t be distributed in cinemas, the movie was still screened at the Moscow film festival.