There are many kinds of art performance that we can enjoy watching. One of them is dancing. There are many styles of dance. If you like classic style, you can watch a ballet performance. This dance type originally came from the Italian Renaissance. Later, some development went through ballet so its form turned into a concert dance in France and Russia. That is why ballet terminologies use French vocabularies. 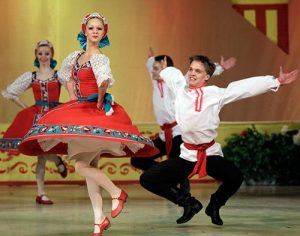 Another example of a popular style of dance is tap dance. Who doesn’t know tap dance? This is the dance known for the tapping sounds that come from the shoes. To produce the sound, you can just wear any shoes. Tap dancers wear shoes that have a metal “tap” on the heel and toe so when they strike the shoes on the floor, it produces the sound of percussion. The variations of tap dance are not only classical and jazz, but also flamenco, Broadway tap, and post-modern tap. Where the tap dance originally came from was still a debate. Many people believe that this particular style is the fusion of Spanish flamenco, African tribal dances, English clog dancing, and Irish jigs.

Just like those two examples, Russia also has its original dance, namely a Russian folk dance. For Russians, this is not only a regular dance but also an important part of their culture. Russian folk dance was shaped with the influences from some cultures and they are the Russians culture from the ancient time, as well as cultures from Eastern Asia, Europe, and America.

There is one dance widely popular as the icon of Russian folk dance. The name of this dance is Kalinka. As a part of Russians culture, Kalinka is recognized for its bright and energetic style that will make you fly. Now, let’s find out more about Russian folk dance and Kalinka!

Russian Folk Dance has been existed since a very long time ago. This is proved by the mention of it in “About Country of Moravia”, an ancient script that tells the story of a group of young Russians who held gatherings on rafts on the lakes. During the gatherings, they would sing and dance in a circle, which called the khorovod (this is the name of the activity where a group of people is dancing and singing at the same time). Even though Russian folk dance was born in the ancient time, the beginning of Russians dancing had happened far before that.

The Great Russian Prince Oleg won a battle against the Greeks in Kyiv in the year 907. As a celebration, he made a gala dinner where he got some people to show entertaining performance. One of them is a dance by a group of 20 male dancers. 16 of them were wearing bear costumes while the rest of them were wearing Russian dancers’ costumes.

Kalinka, a bright energetic Russian dance that will make you fly, was originally a song. A composer and a folklorist, Ivan Larionov, wrote this song in 1860. Its simple lyrics and speedy tempo, which increases with every new refrain, made this song gained popularity soon after its release. During that time, there was a very famous Russians move called Preesyadka. As soon as people realized that the rhythm of both Kalinka and Pressyadka is suitable for each other, they both complemented each other. That was the moment when Preesyadka was started to know as Kalinka.

So, what is the beginning of Kalinka, the famous Russians move? This was all started when the Sviatoppolk II Iziaslavich, the Grand Prince of Kyiv, died in 1113. Chaos was happening all over the city. Anywhere to look, there must be riots in the view. People even looted shops and houses which for sure only made the condition worse. But, a mason namely Petro Preesyadka had no interest to take a part of the chaos. He worked hard all day which required him to be in a squat position most of the time while using an instrument to work with the heavy stones. Every day, after work, he would have a walk on Kyiv’s Broadway, had some wines, and ate some bagels. With a job that needed a physical strength all the time, Preesyadka always felt some tension on his legs. That is why, after he had his dinner, he would do some jumpings to release the tension from his knee.

Rus Vladimir Monomakh was in the city of Kyiv as a response to the invitation sent to him, asking his help to stop the chaos. He was at the same place as Preesyadka when he did the “strange dance”. That is why the later-famous knee-bending move was named after its creator. Everybody in Kyiv knows this move and must be proud to live in a city where the Preesyadka (Kalinka) dance was born.

Nowadays, you can see Kalinka as a dance show in so many big stages. The Russians culture represent by this dance attracts many spectators. The dancers move quickly and gracefully. They will easily show some knee-bending moves and high jumps. No wonder that people consider Kalinka as a bright energetic Russian dance that will make you fly!

During the show, you will also hear Russian songs accompanying every movement of the dancers. Just like the songs play an important part in a Kalinka show, so are the costumes. The beautiful costumes for sure help the show complete. The men dancers wear traditional style of clothes. They put on kosovorotka shirts in a bright color to make it contrast with the dark pants. For footwear, they wear high boots. The style of the women’s costumes is flexible. The most important criteria are they must wear wide skirts so it will be easy for them to jump and squat.

Now we have learned about the iconic Kalinka dance. We can imagine how beautiful the whole performance is – the moves, the costumes, the songs. Kalinka is for sure a bright energetic Russian dance that will make you fly 🙂