Perm is one of the cities in Russia which is the center of the local government of Perm Krai. It is estimated that there are a million people living in this city. This city is located near the Kama River, an almost two kilometers long river, and the Ural Mountains with Mount Narodnaya as the peak of the Urals.

As a city with rich historical and architectural building, this place is one part of Russia that must be visited. It is also easy to go from one places to another because of its good transportation system. People can choose to ride on tram, bus, or trolleybus. They can also take on the train by going to Perm-II railway station, which serves many destinations. With this very convenient condition, it is safe to say that it is easy to go around the city of Perm and find many interesting things.

Interesting Things You Can Find in Perm, City in Russia

A historical city like Perm is one of the cities that must be visited by travelers. As the largest cities in Russia, there are many interesting things to find.

This opera and ballet theatre is named after Pyotr Ilyich Tchaikovsky, an internationally-recognized Russian composer who also experiences as a guest conductor in Europe and in the United States. The theatre was open to the public for the first time on 24 November 1870 with Mikhail Glinka’s A Life for the Tsar as its initial performance.

The theatre, that was rebuilt in 1959, has received many awards. In 1984, its Sergei Prokofiev’s War and Peace received National Glinka Award. War and Peace is an opera based on the novel by Leo Tolstoy with the same name. Other than that, the artists also prove their high class of quality by their achievements. Many of them were given the  Golden Mask Award. This award is granted for a wide range of genre of theatre art.

Not only the opera, but the ballet troupe also gained its international awareness. Naming themselves The Tchaikovsky Ballet, they brought their performance aboard. After that, using a similar name, The Tchaikovsky Theatre performed in Manhattan concert venue, Carnegie Hall, in 2008.

Nowadays, people can easily find tickets online to see the performance. Many visitors who experienced for the first time in watching the beautiful art of opera and ballet in this theatre left with a good impression. Not only the performers perform their best, but the facilities are also well-maintained.

Meshkov House, who was named after its owner, is the architectural building of the 21st century. It was built in 1820 with late Russian classicism as its style. In 1889, the building was rebuilt after it had been destroyed by fire twice in 1820 and 1842. For its second reconstruction, A. B. Turchevich designed it using the modernistic style. Since 2007, the building that is acclaimed as one of the most beautiful buildings in Perm has been used to exhibit the central art display of the Perm local History Museum. 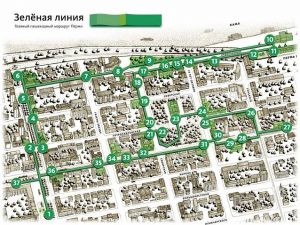 It is easy for travelers to get to Meshkov House. In Perm, pedestrians are provided with a route called “Zelenaya Liniya” where there is literally green pointer on this route to direct pedestrians to see all the best historical, architectural, and cultural places to see and visit in this city. For sure, Meshkov House is one of the places that everybody will find while walking following the “Zelenaya Liniya”.

Meshkov House only gets positive reviews from visitors. The beautiful atmosphere of the museum for sure attracts visitors to enjoy not only the exhibition but also the art that influenced the construction of Meshkov House. This is definitely one of the most interesting things to find in Perm that nobody should miss.

Permyak Salty Ears was sculpted by Rustam Ismagilov in 2006 and located in Komsomol Prospect, Perm’s main street. The word “salt” on this sculpture name was based on the fact that this region is popular for producing salt. The urban sculpture consists of two parts, the first part was a photographer and the second part was a person standing in front of the first one, ready to get his/her picture to be taken. The second part is a figure with a round frame and big ears. It is an interesting attraction for visitors who want to take pictures on this figure.

Just like Meshkov House, Permyak Salty Ears are also located in the green line. The bronze figures would for sure hard to be passed by pedestrians walking by. Not only the visitors could get memorable photos with this sculpture but they can also learn about the history of how hard the salt carriers worked.

The history of salt production and salt carriers in Perm not only inspired the making of Permyak Salty Ears but also the creating of Perm souvenirs. Creative ideas of mixing the idea of Permyk Salty Ears and common words of expression produce some more “unique” words. For example, “do not rash salt to my injury” turns into “do not rash salt on my ears” and “themselves with mustaches” turns into “themselves with salts”. The “new version” of words of expression can be found in many souvenirs like t-shirt, mug, and notebook.

This amusement park was named after Maxim Gorky, a writer and activist which was nominated for Nobel Prize for Literature for five times. The 215-year-old Gorky Park in Perm is the oldest park in Russia and the attraction provided in this park still amuses all of its visitors.

Gorky Park consists of five areas: family, youth, adolescence, central, and administrative. For kids, there are many fun attraction to visit, like Dracula Castle and Funny Cars. For families that want to play together, they can join “Funny Weekend”, an entertainment program held every weekend.

The park opens for a long hour, from 9 am to 10 pm. With all the entertainment and food stalls that easy to find, it is definitely a good place to go. For music lovers, they can enjoy listening to street musicians. For a visitor who loves to see an art exhibition, Gorky Park holds a snow and ice sculpture exhibition called “Snow, Ice, and Fire!” that named as the largest festival of this particular category internationally.

The next time you visit Perm, don’t forget to put these great places on the to-visit list!