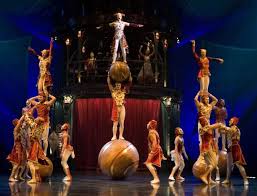 Russia’s performance arts are highly regarded throughout history, and not even an art associated with silliness change that. In spite of the stereotypical knowledge of circuses as a place consisting of huge comical red tent and people wearing strange costumes, circus is taken really seriously.

Jokes are even made, saying even if there are clowns in the circus; none of the performers are clowning around when it comes to their job. At one time in history, the name “Russia” automatically brings “circus” to mind.

History of The Russian Circus

The beginnings of circus are hotly debated. However most agree that circus in Russian history dates back a thousand years. In the 11th century, skomorokhi (wandering minstrels) perform bumbling acts and tell stories related to paganism. The minstrels wore colorful clothes, dressed as fools, used silly nonsensical sketches, conjured ‘magic’ tricks and sang to enhance their performance of Pagan stories, and were seen as a job and an entertainment for fools with a crude sense of humor by those from higher classes. As mentioned in the History of Russian Theatre, they faced oppression and persecution by the church, but they held out for nearly 700 years, before they died out in the 17th century.

As Russia march towards modern society, the traveling minstrels were replaced by show booths on children’s fairs. The attraction included lifting weights, walking upside down, and acrobats swinging on a trapeze, setting a foundation for the standard entertainment of circuses later on. The 18th century sees some developments on circus as an art, with the foundation of the first circus university in the world, the Moscow State College for Circus and Variety Arts. The 18th century also gives the masses an interest in the odd and curious, thanks to the Kunstkamera Museum displaying ‘freaks’ such as bearded woman, human-dogs, and other mix-and-match critters preserved in alcohol. The second half of the 18th century also sees the development of private circuses owned by aristocrats, and stationary circuses for the masses. The first stationary circus were opened in 1877 on St. Petersburg, and the project was led by an Italian equestrian trainer named Gaetano Ciniselli.

The 18th century also sees the founding of a famous ‘dynasty’ of animal trainers called the Durovs. Known for their inventive method of training animals with minimum punishment, the Durovs run the Durov Animal Theatre to this day. Their famous boast says none of their animal handlers use a whip or cane, which is a very daring boast to this day as the most common way to train wild animals is using fear to make sure the animal sees the handler as feared force.

The private circuses became ‘state-owned’ later after the Bolshevik Revolution in the 19th century. This means that all the revenues from them go to the State, but on the other hand this became a stepping stone for the industry to grow even more, not only as an entertainment industry but also as an art. During this time, due to the isolation of Russia from Europe-related political affairs, the acknowledgement of the circus as an universal art, and the instilled idea of taking the performance seriously (teaching the art of a clown, but no clowning around), performers grew exponentially.

In the Second World War, traveling circuses were sent abroad to learn about other countries (although some sources say that it is done to intimidate the United States). However, it ended up far away from the intended effect as the US did not get the fear Communists hoped for but only awe and more appreciation for Russia. The travels impact the way Western people see live entertainment, and set the foundation for the techniques used in the West today and the performers returned with new forms of performances and jokes from their experience in a foreign country. The pantomimes became common in Russia from this, as the performers had to do something new so the foreigners understand the jokes and keep the jokes from getting stale. This has been called a ‘circus revolution’ by some, as the travels sets a wave of change that will later change how circus training is done in the West.

Modern Russian circuses enjoy a high demand from around the world, with 20-25% of known performers from 1300+ famous circuses came from Russia or other former Soviet countries. Most cities in Russia have their own stationary circuses now, and they organize tours either between cities or even in foreign countries. Some projects from ambitious artists have attempted to create a mix in circus, ranging from Antique Circus in Moscow that mixed elements of ballet, theatrical performance, and dance, to Upsala Circus who hires people with social problems in an attempt to give them a better choice in life.