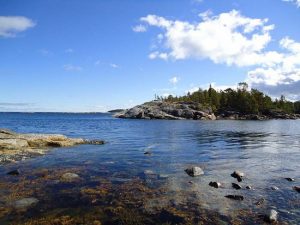 Is there another sea that you do not even know in Russia? Do you know White sea is exist? Do you still unbelieve with this sea that named by color? Do you want to know why its called White sea? Well, too much questions would not paid your curiosity. We have to give you more information from now.  White Sea is situated as a Continental Shelf. What does is mean? lest find out below.

White sea as a part of Russia internal water which have means that parts of Arkangelsk, Republic of Karelia, and Murmansk Sea. The port of Arkangelsk is based for submarine and naval. Lets find out more 5 Stunning Facts of Pechora Sea, Russia

White sea has 4 main bays, which are :

3. White sea have some island

There are some of island in White sea, We have done explain to you only the main 3 island, which are :

The sea of Northwest shores are bordered by steep cliffs.

4. Water that drain into white sea

During winter season, White sea is freeze.. It happen in around October to November and May to June. The temperature of White sea -1,9 degree Celcius. Most of their floats move into Barents Sea. One thing that you should know is, the level of water during tides is about two meters. What an incridible!  [Adsense-C]

6. Animal that lived in

There are so many animal that lived in White sea. There are more than 700 invertebrete species lived in White Sea. There are over 60 species fish including Atlantic Cod, European Smelt, Herring saffron, and Cod. There are many whales that also lived here such as White whales, bowhead, orca, humpback, northern bottlenose whales and several dolphin species.

Seaweed industry also have a contribution of it. High demand of seaweed increases everyday. That can cause of seaweed that produce in near White Sea is one of the best.

7. Why its called White sea?

There are two theories that could give us explanation about the name of this beautiful sea. First theory says that because of the sea that covered by ice more than a half year, so it is called white sea. The second theory says that the color of water being white due to the reflection of the northern sky.

When it comes to Summer season, there are would be summer short, because of the weather, there would be only warm at 13 -15 degree Celcius. Another bonus fact that you should know is, White Sea is not recommended to you for swim. But, don’t be sad at all, you still had the chance to sea this beautiful sea as nature of Russia.

White sea could be your next destination while visiting Russia. Have you put on your list to travel this Wonderful sea? Hope this article may help you to find out.