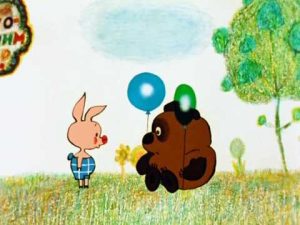 Some of you might have heard of Vinni Pukh, some of you may not. Well, this Russian cartoon is one of the most popular cartoons in Russia. A very cute cartoon, charming animation style, and heartwarming storyline, so go on and watch it, it’s a shame to miss it. If that’s not impressive enough, these are 14 facts of Vinni Pukh, the Russian version of Winnie the Pooh.

1. Based on the book by AA Milne

Just like Winnie the Pooh, Vinni Pukh is inspired by the book with the same name by A.A Milne. The book tells an adventure of a teddy bear called Winnie-the-Pooh and his small toy pig friends Piglet. There’s also Eyeore and Tiger. The Russian cartoon adaptation translates Winnie the Pukh to Vinni Pukh. Although it’s might read different in words, the pronunciation is actually just the same with Winnie the Pooh.

2. Brown instead of yellow

Compared to Winnie the Pooh, Vinni Pukh is more realistic when it comes to color. Where in the world a bear can be yellow, anyway? Hence on Vinni Pukh, we have a brown bear and he even has claws. The cute part is that Vinni’s limb is loosely attached to his body, creating an impression that he’s floating around like a balloon.

3. smart instead of clueless

Do you know that Vinni Pukh is a poet and composed songs in his free time? He also a good singer. Vinni Pukh character it’s not about being cute, he has some depth in him. He often ponders about the important questions of life. He also often play with words and create puns. Can’t you love him even more?

4. Vinni has a nice voice

It’s rough when he speaks, baritone when he sings. Vinni is a Russian bear, really. Meanwhile, piglet his friend has a little squeaky voice. When he and piglet sing, their voice blend harmoniously.

Vinni is a honey bear, and he loves to hunt for a nice, tasty, and delicious honey. He’s even smart about the hunting process. Creating a thorough plan and executing it with such precision. Piglet is his sidekick in honey hunting. He orders around piglet.

Meet piglet, owl, Tiger, Rabbit, and Eyeore. The friends of Vinni is as cute and as charming the main character. They’re also each assigned with quirky personality. Piglet is a loyal sidekick, Owl is wise, Eyeore is often sad.

8. The director hasn’t see the Disney adaption during the making

The reason why Vinni Pukh is so different than the Disney version even though they’re based from the same books, it is because the creator of Vinni Pukh had never watched Winnie The Pooh before. That’s why Vinni Pukh feels so charming and original. From the personality of the characters, its storytelling and animation style, everything feels authentic.

The 82 years old Animation house Soyuzmultfilm is the one producing Vinni Pukh. Soyuzmultfilm is probably the most prominent Animation House in Russia, especially during the Soviet era. Their movies won numerous awards and many are critically acclaimed. Movies are diverse in stories and animation style, making Soyuzmultfilm among the studio in the world to have such freedom for their animators. One of the movies is Hedgehog in the Fog (1975), who was an inspiration to Hayao Miyazaki, The funder of Ghibli Studio.

10. It’s been a generation old

Vinni Pukh has been around since 1969. The first movie came for the audience in 1969, followed by two sequels. Vinni Pukh Pays a Visit in 1971 and Vinni Pukh and a Busy Day in 1972. It’s been almost four decades since then. No wonder that many poeple, young and old, loved this cartoon. It’s a cartoon that brings back childhood memory. It’s been with Russian families for a generation.

Sadly to the disappointment of many, Vinni Pukh is a trilogy of movies instead of your regular weekly cartoon. Aside from the first movie in 1969, the second in 1971, and the last one in 1972, the creator didn’t make any more Vinni Pukh movies. If it’s up to the viewers, many would love to have more dose of Vinnie and friends!

Vinni Pukh director Fyodor Khitruk received an award in 1976. Not just an award, but A Soviet State Prize from USSR government. USSR State Prize itself is the highest honor for the citizen who contributes greatly to The country’s science and culture advancement. Vinni Pukh does deserve this award.

Vinni Pukh and friends are among the most beloved cartoon characters in Russia. So it’s only proper when Russian government commemorate them on postal stamps. Twice Vinni Puhk is featured on Russian postal stamps. First it’s in the year 1988 as a stamp of USSR, and then again as a Russian stamp in 2012.

Praise for Vinni Pukh didn’t only come from Russian governments and Russian people. When the director of Vinni Pukh Fyodor Khitruk visited Disney Studio, the animator of Disney’s Winnie The Pooh Wolfgang Reitherman praised Vinni Pukh and said he liked it than his own version of Winnie. Well, who doesn’t agree to that, Vinni Pukh is a charming cartoon with its own personality.