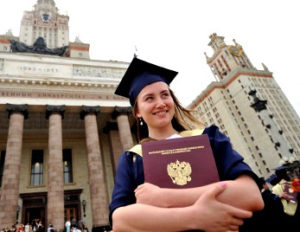 Ever dreaming to study in Russia? Russia is one of the most favorite country to study because of its education system and curriculum. No wonder why there are many people -students in this case- want to study in Russia. Aside of just take the study, foreign student in Russia also can learn about Russian culture. Before you fly to Russia to learn something in school, there are 7 facts about Russian education you need to know:

Since, 17th century teachers in Russia used to classify their students in to three groups. This classification just to show the position of a students between others.

2. Cost to study in Russia

For you who wants to study overseas -especially in Europe-, Russia is the right choice. More than 100,000 foreign students are studying in Russia. They come from worldwide. Education and living cost in Russia are still two to three times cheaper than the other European countries. This make Russia as the 9th largest destination of the world for studying abroad. Students should not be worried more about the cost to study. Some universities in Russia also provide free dormitories for their students who came abroad.

3. Tomsk, The Russian City of Education

In Indonesia, we have Yogyakarta as the city of education because it has many school and universities and students from another cities in Indonesia even from another country. In Russia, they have Tomsk. This safe and peaceful town called as Russian City of Education not only because there is Tomsk State University -which included in the greatest 15 of university in Russia-, but Tomsk government also supporting their people education.

The proof is there is a great library in this town called as Pushkin Library which can be accessed by everyone. This library provides collection of rare Russian literatures, and a striking event space. People often held discussion and art exhibition in this library. Beside directly supporting education for their people, Tomsk also provide their students with high-quality and affordable dormitories, and affordable and integrated transportation. That is why Tomsk called as The City of Education.

Aside from building well-equipped school or university in Russia, Russian Ministry of Education and Knowledge are preparing rules to make requirements for foreign students to study in Russia easier by extend validity period students visa. But, the visa can not be valid for longer period than 3 years. It is very beneficial for students for sure, they do not need to think more for the visa so they will be more focused to study.

In Indonesia we all know that Knowledge Day is on May 2nd or coinciding with our National Education Father “Ki Hajar Dewantoro” birthday. Indonesian Knowledge Day is celebrated as usual day or sometimes we celebrate it with ceremony in school or other governmental office. In Russia, children always start school on September 1st even if it is a weekend or a holiday. This is referred as Knowledge Day- and marks both the first day of school and the first day of autumn. Most kids bring a change of shoes to school. Elementary school through high school are usually in the same building. The morning usually starts with a school assembly during which 11th-graders (the oldest students) take the first-graders by the hand and lead them into the school while ringing a ceremonial bell.

Don’t you dare to study abroad to Russia after reading this article? Since Russia provides those best facilities and offer a cheap education cost, we think you do not have to think twice to study in Russia. Russia also has unique language that will be additional language to learn. Prepare yourself and make sure you study hard to make your dream comes true. Do not forget to fasten your seat belt. Good luck! 😉