Food is one of human’s basic needs. We need it regularly as the source of our energy and nutrients. But, we can also deny that there are many unhealthy foods that we can find easily everywhere. This kind of food usually tastes good, even better than the healthy ones, and does not cost much. Even more, the process of making this food takes a little time. With all these benefits, who does not like unhealthy food, right?

Thankfully, as time goes by, we see that more people become more aware of the importance of being selective in the food they consume. Yes, we need to invest more time in preparing and cooking healthy food but we can feel the benefit it gives to our health in the long term. It is much better to start to take care of ourselves now in the easiest way which is choosing the best meal for our body.

Talking about healthy food, there are many receipts that we can find and try at home. You can even start with the simple ones. Among many healthy foods, these are healthy Russian foods which are made by fruits.

Blini is a Russian and Ukrainian pancake which has wheat, eggs, and milk as the main ingredients. This pancake has been the part of Russians’ traditional food for so long that this even “blin”, the singular form of Blini, is used in communications as a linguistic signal when a person is searching for the right words. It is also used when a person wants to display disappointment. 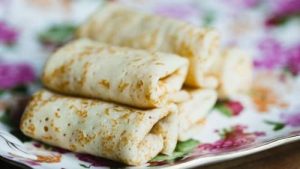 This pancake is not the same as the pancake you commonly find. Usually, a pancake is pan-fried and then served with some toppings on tops, such as some yogurt and honey. It is different with Blini. This one of Russian foods which are made by fruits is traditionally baked in a Russian oven. Blini is made of yeasted batter. To make the batter, you can use any kinds of flours, such as wheat, buckwheat, oatmeal, and millet.  But the most common one is wheat. The batter is then diluted with milk, soured milk, and water (cold or boiled).

As mentioned above, if you want to make Blini traditionally, you need to bake it using the Russian oven. Russian oven is an oven that burns firewood, such as birch or pine. Nowadays, to make it easier, you can fried-pan it.

What makes Blini different from other pancakes is it is served in the form of wrapped. Blini is a healthy food because it is stuffed with fruits such as apples, bananas, or strawberries. Those fruits provide you with natural sweetness. You can either stuff the Blini first with the fruits and the fry it or fry the dough then fill it with the stuffing, fold, and serve it. if you want to add extra flavor to Blini, you can also serve it with chocolate dipping or sour cream.

Kissel is another healthy food you can enjoy as dessert. You can also serve it as a drink. The word “Kissel” originally comes from the Slavic word “Kisly” which meaning is sour. The main ingredients for Kissel are berries, sugar, and cornstarch, potato starch, or arrowroot.

This is a very easy dish to make. You can start by making four servings by preparing 200 grams of cranberries, 900 milliliters of water, sugar, and 2 tablespoons of cornstarch. The first thing you have to do is insert the cranberries into the water and boil it. Once it is boiled, strained the whole mixture through a sieve and get rid of the cranberries’ skins. After that, mix the juice with the sugar and reheat it. In a different container, mix the cornstarch with some cold water. Then, put it into the cranberries juice and stir it all until it reaches the consistency of a thick syrup. You can serve the Kissel in a serving dish but before that, make sure to sprinkle some sugar on top of the juice. It is important to avoid a skin forming on top of the juice.

As one of the healthy Russian foods which are made by fruits, you can serve Kissel cold or hot. To enrich the flavor, there are some ways to serve this dessert. You can eat it together with sweetened quark, a type of cheese made of soured milk or semolina pudding, a pudding made of semolina flour and milk. This is also found as topping for pancakes. Since you can also enjoy it cold, you can eat Kissel together with some ice cream.

If you want to make another fruits-based dish, this is the kind of food you can also make at home. Guriev Porridge has been a part of Russians’ culture since it was invented in the early 19th century by chef Zakhar Kuzmin. This dish tastes so delicious that it became Emperor Alexander III’s favorite dish.

Guriev Porridge is one of the healthy Russian foods which are made by fruits. Just like Kissel, this is the dish that you can serve either cold and hot. The ingredients you need to make Guriev Porridge are easy to find. This dish is also easy to make. Here are the ingredients and instructions to make this delicious Russians’ traditional food.

Now, we know 3 healthy Russian foods which are made of fruits. Which one do you want to taste first?