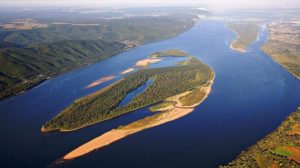 The Volga River is the longest river in Europe reaching 2,294 miles in length and entirely located in Russia. The word “Volga” itself means “wetness” in early Slavic language roots. The river is functioning as flood control, irrigation and transportation. It surely live up to its name as “Mother Volga” for playing a major role in the daily life of Russian people. Many people still depend on the flow of the river for everyday needs, especially for the people that lives near the river basin with agriculture practice along the river.

Another famous name for Volga River is The National River of Russia. It flows through the west side of Russia and passes through some major cities in Russia. Those major cities include Astrakhan, Kazan, Nizhny Novgorod, Samara, Saratov, Tver, Ulyanovsk and Volgograd. More to that fact, eleven out of twenty largest cities in Russia located in Volga River’s watershed. One of the city is Moscow as the capital city of Russia.

Before reaching to the unique history of Volga River that you need to know, it is best to know the nature of the river itself and later the modern Volga River.

The Volga River originates in the Valdai Hills and gradually went down to the height of 748 meters. It is a compilation of 151,000 rivers and 200 tributaries that made up its volume to cover almost two-thirds of the European parts of Russia and ultimately drains into the Caspian Sea. The average flow rate is 8,060 cubic meters per second. Many reservoirs and dams, including Ivankovo reservoir as one of the biggest dam, located in the Volga River. It is mainly being used as power stations using hydroelectric also for navigation locks. The power stations are the most valuable things that are located in the river. Since it is the main power supply for the people living alongside the river.

The river valley has been known for the natural resources that lies alongside the river. It includes potash, many mineral riches, natural gas, salt and mainly wheat. The reason is mainly because of the agricultural activities that people living on the riverside did. Volga’s course is divided into three parts:

To know more facts about Volga River you can see 6 Most Interesting Facts of Volga River in Russia.

During the Middle Ages, the river basin played a crucial part in the movements of people from Asia to Europe. The Volga River has a unique history with its variety of tribes and cultures. The tribes include Slavic, Khazar and Bulgar peoples that settled alongside the courses (upper, middle and lower) of the Volga River basin. The Kama region joined Volga and thus created a polity of Volga Bulgaria. Volga cities such as Sarai, Atil and Sagsin were among the largest and powerful city on that time. For that reason, the river then served as an important trade route that connecting Khazaria and Persia with Scandinavia and Volga Bulgaria.

The Khazars tribe were replaced by Kimeks, Kipchaks and Mongols who then found the Golden Horde of Volga. The Golden Horde of Volga was located on the land south of the city under the rule of Tatar Khanates. Meanwhile in the same time around 1221, the Russian found the city Nizhny Novgorod on the river. The empire that controlled the Golden Horde then divided into the Khanate of Kazan and Khanate of Astrakhan. Russians conquered both empires in the 16th century. The Russians managed to claim their power over most part of the river basin.

The Russians people’s proud for the Volga conquer echoes in many national culture and literature. In the Soviet Union era, there were many constructions of dams and reservoirs. It involved a big deal of enforced resettlement of people and destruction of historical heritage. Such example is the city of Mologa that was flooded in purpose for constructing the artificial lake known as Rybinsk Reservoir.

Since 1809, maritime bureau keeps on exploring the river’s delta. Further explorations were conducted in the later years to cover the precise length and breadth of the river and its tributaries.

Almost 40% of the Russian people lives in the Volga River Basin along with a huge number of industries based on the banks. After knowing about the unique history of Volga River, the function of the river itself these days has not changed much over decades. Industries are taking advantage of the flow of water from the river that leads to Caspian Sea as transport facility to deliver goods for import and export process. Some of the major ports along the Volga is Nizhny Novgorod, Samara, Ulyanovsk, and Tver. Not only the waterway of the river, but also its tributaries contribute as the path of transporting resources and products. Those resources and products include materials for construction, petroleum, farm products and also machinery.

Gradual exploitation in Volga happened by the creation of hydroelectric power stations through huge dams and reservoirs creation. It is one of the main reason for the less volume of water reaching the Caspian Sea. A lot of dams are accompanied with power stations. There are total of eleven power stations on the region which can generate for about 11 million Kilowatts of electricity power.

Various tourism attraction were built in the area surrounding the river. It makes the river one of the famous tourist destination. Especially with the river’s nature that is capable of being in a frozen state for up to 3 months in winter. Other features for its holiday destination, are fishing and water sports. Not only that, the place itself has been built with hotels and restaurants to keep tourist to come the area and enjoy Volga River.

Volga River’s climate varied over the region from north to south. The northern climate defined as snow-covered winters and humid summers. While the southern climate defined as a usual cold winters and dry summers. That is the reason why Volga River has a rich variety of flora and faunas. You can see more about 5 Animals That Lives in Volga River. But, the main problem of Volga River is there has been a great dilapidation happening over the years. It happens mainly because of human activities. Building reservoirs and dams have led to smaller volume of water flowing to the Caspian Sea. Also, industrial activities and livelihood waste contribute to high rate of pollution that influence the habitat of plants and animals on the river.

If there is no further action, it is possible that the river is going to completely lose its ecosystem. Not only the ecosystem surrounding the river, but also one inside the river itself. Soon it is possible that we will not see any kind of living creatures inside including variety of animals and plants. The small current of water flow that reach Caspian Sea will also influence the capacity of generating electrical powers. In which it can no longer generate the optimum amount of power overtime if this condition continues to happen.

That is all for the history of Volga River and if you want to know more or just want to read more about Russian history, you can check these articles of History of the Famous Russian Theater, The History and Tradition of Russian Samovar, and History of Muslim Culture in Russia.