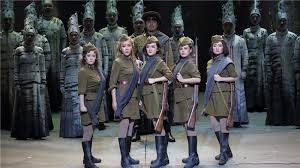 Can’t-Miss Russian Festivals During Fall Time – Autumn is one of the four seasons experienced by temperate countries or subtropics. Autumn is a transition season from summer to winter. In autumn, a variety of plants that are being planted can be harvested and the trees will fall off their leaves. Autumn makes the days shorter and the temperature has begun to decline because the sun has left the country. The short day was caused by the sun setting earlier.

In the northern part of the earth, including Russia, in the astronomical calendar, autumn occurs from September 23 to December 21 each year. And in the southern hemisphere, autumn occurs from March 21 to June 21. Every season is the best time for you to take a vacation. You must try the holiday sensation in every season in a country, because it has a different impression.

Before the holidays, you should find out in detail about the country. Starting from culture, to the events that will be done when you are there. If you are planning a vacation with family, spouse, or friends, in autumn in Russia, you need to know the information about the festivals that you have to go to:

The Dawns Here Quiet is a novel from Boris Vasilyev from Soviet origin. This novel is included in a popular novel, as evidenced by the adaptation of The Dawns Here Quiet to become a film in the 1970 Oscar nomination. Then on September 14-15, the China National Performing Arts Center (NCPA) will showcase The Dawns opera Here Are Quiet at the Central Academic Theater of the Russian Army. The music to be played in this opera was created by Tang Jianping, one of the famous composers in China, and directed by Wang Xiaoying.

This event was held as a form of the fifth anniversary celebration of the Jagermeister Music Awards (JIA). Party The launch of the Jager Music Award will be held on Friday 14 September at Pluton. At the age of five years, Jagermeister Music Awards (JIA) managed to become a barometer of independent music in Russia. This program is not only about music performance, there will also be people who are experts in the world of independent music, festivals, blogs and clubs. After all the programs were completed, the top event will begin with the appearance of the famous Russian local band Cream Soda. In addition, there were also several performances from experimental DJs from Peru, namely Sputnik, Xio, and Rust Lee.

This event is one of the events in the fall that is always there and you must go. The Strelka Summer Closing Party will be held in Moscow, Russia, on September 14th. The event that has been legalized takes place in an open courtyard on Friday at the night of Strelka. At Strelka’s Summer Closing Party will be the Naples or Berlin Nu Guinea duo who made the premiere release of her most successful dance album in the summer, Nuova Napoli. The album combines Neapolitan jazz-funk culture with music boogie and disco.

This Red Bull music festival is held by the Red Bull Music Academy, an academic that is a springboard for young musicians and talent search agencies. The festival will be held for 3 days from September 14-16 and become the biggest music event in Moscow for the first time. The Red Bull Music Festival takes place at the Arma nightclub in a former factory. In this festival, Larry Heard, aka Mr. Fingers, Chicago’s home music pioneer, collaborates with Japanese Sapphire Slows electronic music with experimental Russian artist Maria Teriaeva, and there will be an award for the first Soviet electronic musician who is also a songwriter from “Bananan” for “Assa” cult film, Yury Chernavsky . Choose the best local cosmetics brand from Russia that you will use appropriately to support your appearance when attending the Red Bull Music Festival.

A contemporary art festival will be held for one day, precisely on September 15 in the Vernissage Festival. The Vernissage Festival is a new innovation in the souvenir market and the pseudo-historical complex of Izmailovsky Kremlin. In the Obedineniye Contemporary Art Festival there will be young artists, architects and musicians. In addition to music, in this event there will also be an art market, public lectures, exhibitions and performances. In addition there is also a Craft Fair which was also held at Izmailovsky Kremlin.

The first Singapore festival to be held in Moscow, Russia will take place at the Flakon Art and Design Center, a former glass factory that has been transformed into a creative cluster of cities with many boutiques and bars in it. The Singapore Festival lasts for two days from September 15-16. In the Singapore Festival you will find a variety of cuisines from authentic and starred restaurants in Michelin. In addition there are also exhibitions of art, photography and contemporary design which will feature various workshops and shows from Singaporean musicians. In this festival you can also get unique souvenirs and accessories from several designers.

One of the most famous festivals in Moscow, Russia, is the Golden Autumn Festival. This festival is held regularly every year by the Government of the Russian Federation. The Golden Autumn Festival is a form of celebration of the day of agriculture and processing industry where the Russian Ministry of Agriculture is the organizer. Golden Autumn is also the largest agricultural forum in Russia which has been going on for more than 20 years. In this festival there will be an all-union agricultural exhibition and an exhibition of modern technology in agribusiness.

This year, the Golden Autumn Festival will be held on 9 to 12 October 2019. Aside from being a form of celebration, the festival aims to describe the current conditions of agroindustry in Russia, namely a product demonstration and solutions to technical modernization and agricultural technology, innovative technology, saving energy, as well as saving resources for a more secure Russian food supply.