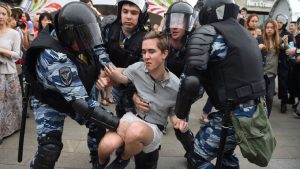 Russia is a country with a million charms. There are so many destinations in Russia that make tourists interested in visiting the largest country in the world. Not only its natural beauty, cities in Russia are also very beautiful with a very comfortable atmosphere.

Tourists who are interested in visiting Russia certainly cannot come directly with their bodies and money. There are so many documents that must be completed. In addition, knowledge of the country visited is also very important for tourists. Because every country on earth has its own laws and prohibitions. So, if you visit a place outside your country, you must be able to adjust. If not, then something unwanted will happen to you that will make your vacation disturbed.

Russia is like other countries. Having a legal system and sanctions for violators if they do something that is prohibited. Then, do you know what things you should not do when visiting this country? If you haven’t been in years, then you should first undo your intention to visit this country. And in this article, we will present things that are prohibited to do in Russia. Here are 5 things that don’t make you get arrested in Russia.

1. Forgot To Carry A Passport

Of course this one thing you should not do in any country you visit, and one of them is Russia. Forgetting to bring a passport is fatal when you accidentally meet with the authorities who check the completeness of your documents. A passport is an official document that contains your identity and proof that you are a legal traveler. Of course you can imagine what will happen if you forget to bring your passport.

When you happen to meet the authorities and you forget to bring your passport, then they have the right to hold you at least 3 hours until you have successfully shown your passport to them. Of course this will disturb your vacation. and you might be considered an illegal traveler if you don’t succeed in showing your passport, or it turns out your passport is lost. So, keep your passport as you look after yourself. and always carry the passport wherever you go. Remember! You are outside your country.

2. Drink In A Public Place

Drinking vodka has become a habit for Russian people. However, the government is making several efforts to reduce excessive drinking habits in the country, because it causes a lot of negative impacts. The government makes strict regulations regarding the sale of alcohol and restrictions on where you can drink. You should not drink in public places such as hospitals, schools, stations, trains or museums. And if you are caught by the authorities, you will be penalized and arrested for interrogation. So, don’t think because Russian people like to drink you can be free to drink alcohol wherever you want in that country. Because the rules are different now.

Smoking is something that is not prohibited in Russia. However, you must know the right place to smoke. In contrast to western countries that give freedom to smoke, Russia does not. Combating cigarettes is one of the efforts of the Russian government today, and their efforts have been successful. You should know that smoking is prohibited in public places such as restaurants, night clubs, bars, buses or trains. So, if smokers are already unable to suck nicotine, they will smoke in their home or room. Of course this is allowed because it does not disturb the comfort of others.

And when you smoke in public places, then the police see it, you must surrender to the police. You will be given a moralistic boost and can be held for up to 15 days. Do you want to spend your vacation in prison?

The most popular social media in Russia is Vkontakte. Law always oversees the social media platform. The authorities will not remain silent if they see someone who spreads hatred through social media. Sometimes, you may not intend that, just making jokes or sharing your feelings. However, you must think many times if you want to post something to your social media. Or you will be arrested if you do something wrong.

Pokemon go has shaken the world with its popularity. Almost everyone is tempted by Pokemon Go. However, Pokemon go is prohibited in Russia, of course there is a cause. Pokemon go starts being banned when a player plays pokemon go inside the church while mentioning spells that sound religious and swear. His actions eventually fell under the law because they were considered insulting religious feelings signed by Putin.

In addition, Pokemon go is also felt to have more negative effects that endanger the players. So that the Russian government agreed to ban playing Pokemon Go. And if you violate this rule, you will be arrested by the authorities.

Every country has different rules and restrictions. And everyone must obey because regulations are compelling. Even though you are only a tourist, you still have to follow and comply with all the regulations in the country you are visiting. Of course it is also for your convenience and security. And if you intend to visit Russia, then you should not do the 5 things above.

Those who were prohibited from doing that made you get arrested in Russia. Hopefully this article helps you become a good tourist and adhere to all forms of regulations in the country you visit.