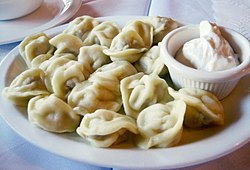 Like, may other countries in the world. Russia is very rich when it comes to food and dishes. The vast are of Russian Geography also say a lot about their food. The far east side will have a slightly different kind of food depending on the weather and climate. It is not too overwhelming to say that Russian large area seems like a compilation of different area. That also goes to their food. There are many Russian Food Which Is Similar To Typical Foods In Other Countries. There is blini the Russian pancakes, shashlik that resembles the common satay, or Pelmeni for the dumpling look alike. Particularly for dumplings, there is more variation than any other food. The nation wide traditional food come with various forms and fillings.

The Difference Of Pelmeni And Pouzy, The Russia Dumpling

The common dumpling in Russia is pelmeni, the fillings are usually savoury with various meat combination such as pork, meat, lamb, hare and even fish. Interested in the sweet version? you got it there is the cherry to potatoes variation that differs depending the seasons. There is even different variation according to region, such as the Pelmeni But In Siberian Style, You Will Love It beyond no doubt. And there is the Pouzy that also a kind of dumplings that you can easily make at home with various fillings and occasion. Do you want to know the difference from both of the dumpling version? Here are some of them.

Pelmeni is like a little parcel of surprise that just burst in your mouth. This Russian Meat Dishes That Can be So Mouthwatering. Commonly people will make it in abundance with their family or neighbour. Afterwar it goes to the freezer for those days when you do not feel of cooking at all. Now the size is relatively small, almost like the shape of ears. It is where the word Pelmeni come from. It is from pel’nyan’ literally means “ear bread” based on native Finno-Ugric Komi and Mansi languages.

What about the Pouzy? the size is way bigger. It is even can triple to the Pelmeni size. Pouzy is taking a similar size to the Chinese dumplings (bao-dzi). Even the name sounds the same. So, no wonder people will have lesser Pouzy in their plate due to their larger size than the typical Russian dumplings.

Well, just from the size of it. you can tell POuzy have more fillings than the Pelmeni. But that is not the only difference between the two. While their appearance may differ the content can also slightly adjusted.

Pelmeni will always come in meat fillings. While their appearance is different the fillings are something else. Pelmeni is often a combination of beef, pork and lamb. In a different area of Russia, people use fish, lamb or even hare. But the content will be something savoury with something meaty.

While Pouzy takes a different turn when considering their fillings. The size is larger, so people stuffed steamed cabbage also to make the dumpling more full. So, you can taste crunchy of braised cabbage along with the minced beef in the Pouzy fillings.

There is no doubt that dumplings in Russia have more varieties than any other part of the world. The savoury Pelmeni is better to know in almost Russian. They may differ in term of fillings but tend to keep the same size and also layers of the dough.

Pouzy is less popular then Pelmeni and particularly can be found in the Baikal area. Although Pelmeni is known as Russian national dish, it also has several other versions such as the Vareniki and pierogi, which both the vegetarian version.

Once you reached the Lake Baikal and eating the common food there. You will notice the foreign influence to the food Like The Ukranian Vareniki and The Polish pierogi, The Pouzy or “Buuza” (in Buryat language is highly influenced by the Mongolian. It is one of the fun Facts Of Buryat people The Mongolic Group In Siberia. The steamed meat with cabbage dumplings is the most famous traditional dish of Buryat and Mongolian cuisine.

The Pelmeni is stuffed raw meat with salt, pepper and garlic. While the Pouzy has a braised cabbage inside before mix it with the minced meat. So, how you cook both dumplings are slightly different. Although both are Russian Food Recipes Contain Smetana the Russian sour cream. How cook them is different.

You put frozen Pelmeni in a pot and boil them until the dumplings floating to the top of the pot. And how would you cook Pouzy? By steaming them. You put them with the steaming pot with water underneath this prevent the shape of the dumplings turns due to its larger size.

So, how would you like to have your dumplings? In large size or smaller ones? You can go personal also with the fillings. This is one of the Russian facts about food that their rules are that there isn’t any. You can have your dishes any way you like it. You can have the small bite-size Pelmeni that is the nation known authentic dishes. And on the other hand, if feeling more practical with larger size and more fillings you can always go to the Pouzy version of dumplings. Those difference that makes Russian dishes more rich and amazing.