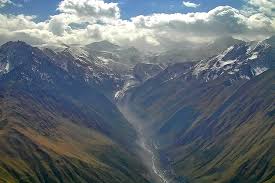 Although it could be one of the places you should avoid in Russia, Kolka Glacier is actually located in a very breathtaking landscape. From the Black Sea to the Caspian Sea, lies a line of snowy mountains, the Caucasus mountains.

The mountainous area is a barricade between three countries, Russia to the north, to the south is Azerbaijan and Georgia. Glaciers cover the area where basins borders steep mountain walls. The highlight is the extinct volcano Mt. Elbrus, which at 5,642 is the highest mountain in Europe.

It is a sparsely populated area, but it’s one of the most popular mountains areas among tourists, campers, and nature enthusiast. It’s understandable, the area provides visitors with one of a kind experience. The snowy mountains are perfect for skiing and snowboarding. The volcano fuels heat for many hot springs in the area. Many of the plants and animals endemic to the Caucasus live here. They can only be found in the Caucasus region.

Kolka Glacier is formed by avalanches and ice that build up all year round. The highest point of Kolka Glacier is situated at 3000 m and 3450 m above sea level. The layer of ice on this glacier can build up to 1 m thick. Kolka Glacier has gentle slopes and deep cirque. However, the topology of the area forces it to make a sharp turn, making the glacier prone to surging.

Mount Kazbek itself is an interesting mountain. It is a part of Kazbegi nature reserve, a reserve founded by the Soviet Government in 1979. The area includes alpine forests, beech forests, and alpine meadows. These forests are the home of many endemic species of Caucasus.

Legend says it that Mount Kazbek is sacred. There is Georgian folklore about Amirani, the Georgian hero who was punished by gods because he stole fire and gave it to humans. Mount Kazbek is where he was chained. The place is also of a significance for Orthodox Christians. At 4000 m, there’s a cave called Betlemi which believed to house sacred relics such as Abraham’s tent.

3. A part of glaciers studied in the URAGAN Project

the URAGAN project is a Russian project to study climate change in the world. It specifically focuses on glaciers, not only in Russia but also in the world. The project aims to study the world’s glacier and how global warming could change them. The project works together with the help of imagery satellites from the International Space Station.

4. Have a photo taken from International Space Station a month before the deadly surge

Around a month before the 2002 surge, Kolka Glacier is photographed from International Space Station. Russian scientists Olga Tutubalina, Sergei Chernomorets, and Lev Dessinov were among many helping interperate the satellite image of Kolka Glacier. They predicted the possibility of surge because of global warming. However, no one predicted that it happened sooner than expected, only a month later.

5. Locals actually have familiar with the threat of avalanche

Avalanches caused by the glaciers at Mount Kazbek is not a stranger for locals living at the foot of the mountain. Villagers built their homes far from the mountain slope, on the valley floor. However, some people built settlements on the slope of the Karmadon Valley. Some were even built at the crests of the mountain ridges, despite the area is where the surge would flow through and therefore dangerous to live in.

6. Known for its deadly surges

Kolka Glacier is known for its deadly surges. So far there are three recorded surges in the past century. The surges caused many casualties, costing the lives of many and destructing villages.

There first recorded surge is in 1902. Costing the lives of 35 people, the surge was caused by the rise of temperature and heavy rains that happened several days before. Another surge happened in 1969. This time, there were no casualties.

The deadliest surge of Kolka Glacier happened in 2002. The chronology is as follows: A Cirque to the west of Mount Kazbek host a chunk of rock and ice, just hanging at the glacier of mount Dzhimarai-Khokh. The formation collapsed to the Kolka glacier below. It created a domino effect. Kolka was shattered. A mixture of ice, rocks, and snow create an avalanche flowing into the Genaldon River valley.

Flowing through for nearly 8 miles, the flow accumulated into a deadly and long avalanche going as far as the Karmadon Depression. the Karmadon Depression is a small valley between two mountain ridges. The flow was originally blocked at the northern end of the depression, called the Gate of Karmadon. However, the mud containing dirty ice and rock slipped through, creating a massive explosion of waves that destroyed the village of Nizhniy Karmadon and several surrounding villages. The casualties were 125 lives.

7. Scientists continue to study the disaster

After the disaster, scientists continue to study Kolka glacier. They want to figure it out what exactly causing the surge, while also collecting information in order to predict the glacier’s activity in the future. Five trips have been made since the 2002 disaster by scientists from various backgrounds of study.