As a transcontinental country, Russia’s territory receives considerable influences from Asia although majority of its lands are located in Europe. A perfect example of this case is Grozny, the capital city of Chechnya, Russia. Historically, it always maintains close ties with Russia, but its culture and society are greatly influenced by its nearest neighbor, the Middle East.

Most people only recognize Grozny as “that city where Muslim Chechen residents rebelled against Russia after the collapse of Soviet Union”. It is true that Grozny has experienced extremely tumultuous period in the past. However, as soon as peace is attained, Grozny rises as new must-visit destination for tourism, thanks to successful reconstruction efforts and its favorable climate. 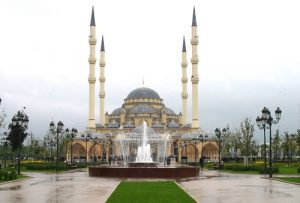 During the disastrous Chechen wars, many countries put Grozny on their travel warning lists. Armed conflicts at the time resulted in the death of countless civilians and destroyed the city. Worse still, the UN mentioned Grozny as “the most destroyed city on earth”. However, it was in 2003, or more than 15 years ago. Therefore, this perception of war should not be your only impression about Grozny. Violence hardly came back since re-establishment of the new Chechnya government and the reconstruction of the city after the war ended in 2003.

Industries and infrastructures in Grozny had been rebuilt from scratch, including the city’s roads, housing, sewage, water, electricity and heating systems. Transportation hub such as railway and airport also restarted in the next few years. Grozny Airport sent Hajj pilgrims to Saudi Arabia in November 2009 to celebrate its maiden international flight services. A year earlier, Grozny Mosque’s grand opening was held by touting its name as one of the largest mosques in Europe. A new breath of life had risen from the ashes of war.

The Fascinating Landmarks of Grozny

Grozny has rich heritage that would charm anyone; including its architecture, food, and many other cultural assets. The heritage perfectly mirrors Russia and Middle East influences, with a little extra twist that makes it uniquely Grozny.

“But, didn’t you say that they were in a bloody war less than two decades ago?” or so you might say. Well, no war can destroy Grozny and its indomitable spirit forever. In fact, you can witness the currently peaceful city yourself through the various landmarks that are quite famous in the region. There is the Akhmat Kadyrov Mosque, Grozny-City modern complex, the National Museum of the Chechen Republic, Lake Kezenoyam, and the Aimani Kadyrova Mosque.

The mosque is located in Grozny’s Islamic architectural complex on the scenic bank of Sunzha River. Nicknamed “the Heart of Chechnya Mosque“, it has become a symbol of Grozny’s reconstruction after its completion in 2008. Surrounded by four 62-metre minarets, its architectural style emulate Istanbul’s renowned Blue Mosque with high ceilings, crystal chandeliers, and huge inner dome. The walls are adorned with classic Islamic calligraphy written in colorful blue, red, and gold paints.

Because it is built recently, Akhmat Kadyrov mosque is already equipped with modern facilities and latest technologies. In fact, it entered the list of 10 most unique mosque in Russia due to the 24/7 online broadcasting it provides.

It is a five-star skyscraper hotel and business centre complex located behind the Akhmad Kadyrov Mosque. It offers modern mid and high-end amenities for Grozny’s residents and visitors. If the Akhmad Kadyrov Mosque might remind you of the opulent Turkey, then Grozny-City Towers would remind you of the luxurious Dubai with its glam exterior and interior.

3. National Museum of the Chechen Republic

As its name suggests, National Museum of the Chechen Republic houses cultural items related to the Chechens. There are artworks, archeological artifacts, photograph and replica of traditional instruments, historical records, and many others. If you want to dig a little bit deeper into the lives of Chechen before and after the war, this museum should be your first destination.

Russia is dotted with mountains and lakes, and Grozny is no exception to this rule. Lake Kezenoyam is the deepest lake in the Caucasus Mountains; not exactly located in Grozny, but more precisely on the border between Chechnya and Dagestan. Previously, a village nearby is known as rebel stronghold. But currently, it is simply a picturesque lake that freezes in winter and blooms in spring.

Aimani Kadyrova Mosque, also known as the Mother’s Heart Mosque, is newly established in 2014. The mosque is also not locate within Grozny, but instead in the next city of Argun. Due to its predominantly glass facade, the mosque’s design presents more modern impressions than Akhmat Kadyrov Mosque. The mosque also has become a charming photo spot because the facade may light up in different colors during the night.

Grozny: A Tale of  Halal Russian Cuisine and Culture

According to a poll in 2010, Islam is practiced by 95 percent people of Grozny. Of these, most are adherent of Shafi’i Madhhab of Sunni Islam, although there are also sufis and other schools of thought. As such, Grozny’s cuisine and culture are intricately entwined with Islamic faith, customs, and ordinance.

For instance, Muslim holidays such as Eid Al-Fitr are grandly celebrated by the people of Grozny. Females are informally required to wear headscarf and advised to travel together with male members of the family. Also, alcoholic beverages are very rarely sold here. Most restaurants do not provide any liquors, including Vodka.

Better yet, Muslim tourists do not have to worry about halal foods in Grozny. The default menu of Grozny’s restaurants are halal, featuring beef and chicken meat cooked in various style of Chechen cuisine. An example is zhizhig-galnash, a meal consists of salted beef and dumplings served with a broth made from potatoes or garlic. For lighter meal, there are the legendary cheese Tvorog and the tasty buttered pancake Blini which commonly available in Russian tables.