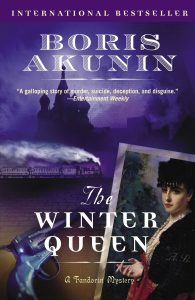 All literary lovers already know, that Russia is one country that has a myriad of famous writers with a variety of their extraordinary works. And the works have been recognized worldwide and adopted as a film or television series. In fact, these books are still a reference for literary and historical lovers to date. The works of Russian writers greatly influenced the development of 20th century drama and literature.

Russian writers are very talented at writing various types of creative writing. Like novels, dramas, short stories, fiction, poetry and prose. They have specialties in each of their works. Besides, Russia, which was once filled with social, religious and political turmoil, encouraged writers to capture this in their writings. so Russian books are not only famous among literary lovers, but also lovers of history.

Some Russian famous literary works, Anna Karenina and War And Peace by Leo Tolstoy, Doctor Zhivago by Boris Pasternak and First Love by Ivan Turgenev. Maybe you’ve heard or even read these books. But, you are wrong if you think that only those literary works from Russia. there are still lots of brilliant books that you might never read or hear the title at all.

In this article, we will help you find some amazing Russian books that you may never have read or heard before. The stories and words in these books are no less interesting than Russian famous books like Anna Karenina and Doctor Zhivago. Here are 5 brilliant Russian books you probably haven’t heard or read.

Boris Akunin is very talented and wholehearted in writing this novel. Very clear from the results, this novel is truly extraordinary! The Winter Queen tells the story of detective Erast Fandorin in charge of investigating a student’s suicide case, Pyotr Kokorin in a public park in front of a beautiful young woman, Elizaveta. Fandorin falls in love with Elizaveta. And this case led him to investigate the Moscow terrorist group “Azazel”. However, Fandorin has not yet finished revealing about Azazel, Elizaveta, the young bride who died because of a bomb in the package. This happened because Fandorin tried to chase the sender, not to save his wife.

Very extraordinary story right? Besides presenting a mystery about Azazel, The Winter Queen presents a love story that ends tragically. Of course, this combination of stories will make your heart torn. The Winter Queen was also adapted into a film in Russia titled “Azazel”. If you want to finish the end of this story, you should immediately read The Winter Queen.

2. In The First Circle

In The First Circle is a novel by Aleksandr Solzhenitsyn in 1968. And the full version was only released in 2009 in England. This novel is a semi-autobiographical genre with 741 pages.

This novel tells of the cruel life of the Soviet Union and Stalin’s cruel and cruel character which is very clearly illustrated in this novel. This novel describes the lives of sharashka residents located on the outskirts of Moscow. This novel is very autobiographical.

For those of you who like novels with this genre, this novel will give you a very unique historical story. In addition, this novel will add a lot to your knowledge. and you will also easily understand the words in this novel, because they include modern novels.

This novel is the work of Russian writer Dmitry Glukhovsky. This novel is a post-apocalyptic genre and was released on March 28, 2005 in Russia and 2010 in the United States. This book has been translated into 34 other languages.

Dmitri Glukhovsky set the scene in the Moscow Metro according to the title of this novel. It is a hiding place for survivors after the global nuclear disaster.

Lolita is a novel written by Russian writer Vladimir Nabokov. This novel speaks Russian and English which was released in 1955. This novel has 368 pages. This novel is a romance novel that tells the story of Humbert, a middle-aged man who falls in love with a young girl, as Lolita.

Humbert argues that Lolita has a predecessor. A girl named Annabel Leigh whom she met when she was a teenager. However, the strict supervision of Annabel’s parents frustrated them a few months later Annabel died. Humbert married, but was left by his wife and he migrated to America.

In part two of this novel, Humbert met Dolores Haze, daughter of his boarding house, Charlotte Haze. Charlotte fell in love with Humbert and they married. But eventually they quarreled because Charlotte read Humbert’s diary and learned of Humbert’s unnatural desires. Then Charlotte was hit by a car in front of his house. Dolores, who was with Charlotte’s lawyer, was picked up by Humbert, then they made love at a hotel. Then, what about the ending of this story? Will they lived happily ever after? You must find the answer immediately!

Because of this novel, the term “Lolita” has become very popular, which is to describe underage girls, around 12 years old. Then came the term Lolicon or Lolita Complex, a term for those who like underage girls. Are you interested in reading it?

This novel is a romance novel which tells the story of the complicated relationship between Velchaninov and Trusotsky. Velchaninov had an affair with Trusotsky’s wife Natalia and they had a daughter named Liza who was 8 years old. Velchaninov who did not want Liza to be raised by alcoholics, took Liza to a foster family, and Liza died there. However, this illicit relationship was unknown to Trusotsky.

Those are 5 brilliant Russian books you probably haven’t heard or read. The novels are certainly very extraordinary even though you may have never read or heard them. When you read the novels above, you will realize that these novels are no less interesting than famous Russian novels.