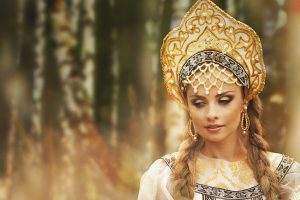 Kokoshnik is a Russian traditional headdress worn by women. It is shaped like a crown, with many embroidery and jewel. Mostly, kokoshnik has a semicircular shape. The half-crescent shaped headpiece was a favorite among women throughout Russian history. It was especially popular among wealthy people.

Kokoshnik comes in all size and shape. And there is a lot of variation throughout the region in Russia. Check out this 5 kinds of kokoshnik arts. But in general, they have the same origin. There are similar beliefs and superstition that surrounds them. Shortly, we’re going to learn all about that. Also, learn other superstition

Today, kokoshnik is a part of national identity. Kokoshnik makes a regular appearance during cultural events such as carnival. Not so much as daily wear, though. Women no longer required to wear it. And wearing it is no longer indicate that the wearer is rich or comes from the nobility. If anything, people will see you weird if you wear it daily.

Here is all about Kokoshnik superstitions you should know

Kokoshnik and practically any headwear in old Russia are originated from a belief that hair can attract devil or evil spirit. Hence, people should cover their hair and this is especially true for married women. Of course, if you ask any logic behind this thing, you will find none. It is just that exposed hair can attract bad thing, from bad luck, temptation, to diseases.

2. Only worn by married women

Hence, Kokoshnik is worn by a woman since she got married. Maiden or young girls don’t need to hide their hair. This is because a potential suitor or husband will need to see a woman’s hair in order to determine her ability to bear healthy children. Hair is a symbol of fertility and it’s can be one of the deciding factors when a man chooses to marry her.

Once the woman is married, she no longer has the use for her hair. Now it’s time to shield it from evil stuff, hence they wear kokoshnik and other similar but less formal or elaborate headpiece.

3. It symbolizes social status and wealth

Kokoshnik is a work of art. The making of kokoshnik requires certain talent that kokoshnik maker can be called a designer by today’s standard. The materials used for creating kokoshnik are high quality and using difficult embroidery. They are also adorned with precious stone and jewelry.

That’s why kokoshnik is a symbol for the wearer. They indicates how rich the woman or her status among old Russian society. The richer the woman, the more elaborate the kokoshnik is. And she would have a lot of collection of kokoshnik too. The common women and peasants may own a kokoshnik, but they’re less detailed and luxurious, Not so wealthy women only wore kokoshnik on special events only.

Because kokoshnik is expensive and hard to make, a kokoshnik is treasured by its owner. Mother would pass it to her daughter, and the daughter will pass it to the next generation. The meticulous design and high-quality materials ensure the kokoshnik to last through generations.

5. Used as a political move

There are times in Russian history where kokoshnik was banned. Kokoshnik was the regular attire accompanying sarafan among the court ladies during Peter the Great era. But the tsar forbade it and replace Russian fashion with something more European. This cause many great stirs especially among the married women. Especially because many European fashions at the time was not in accordance with local values.

This is not only time Russian use kokoshnik as a political move. during the napoleon war, Russian ladies stop their preference toward Paris fashion and going back to their roots. Hence kokoshnik, sarafan, and russian traditional shoes are what was preferable as a statement to support the country. See Russian fashion throughout the history here.

6. Catherine the great brought back Kokoshnik in fashion

When Catherine come into the throne, kokoshnik is back in fashion. In one of her portrait, she was wearing a kokoshnik on top of a Russian dress. This is because she has respect for Russian tradition.

Although has beautiful and look regal on the head of whoever wearing it, Kokoshnik is not a crown. It is a headpiece that serves a different purpose and made from a different material. It is usually worn on parties. celebrations, and on holiday.

Kokoshnik fell from popularity when Soviet states began to form. It was banned as it is a symbol of nobility and feudalism that’s not in accordance with communist value. However, it was popular outside Russia, usually brought by Russian emigrates abroad. It’s become unique fashion pieces.

After a century buried as a trinket of old-time, kokoshnik comes back as something else. In recent years, it becomes the symbol of Russia along with any other things that were banned during the Soviet era.

Kokoshnik becomes special attire during cultural events. During the 2018 world cup in Russia, many Russian fans are seen to wear kokoshnik to the stadium. That’s one of the examples of how kokoshnik is worn today. Kokoshnik also makes an appearance in popular cultures, such as worn by Natalie Portman as Padme Amidala in Star Wars.