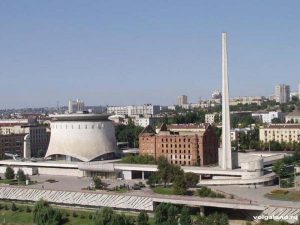 It’s where millions of soldiers fall defending their motherland. In Russian school, this battle is thought to young students. The story of their bravery and sacrifice is continuously told to the new generation. So this event is never forgotten. Volgograd itself is called the city of heroes, in honor of these brave men and women who died defending the city.

As a tourist, learning a country’s history benefits us in so many ways. It makes us understand the struggle of a country we probably never heard before. It makes us empathize toward humanity in general. After all, wars are terrible.

To study deeply about the city, it’s recommended to visit Volgograd’s Panorama Museum. It’s the most comprehensive museum about the Battle of Stalingrad. Prepare at least two hours for a tour in this museum. Here’s what you will learn in the museum

The battle of Stalingrad took place from July 17, 1943, to February 2, 1943. It started as the German airforce Luftwaffe bombing the city and Russian ships on the Volga River.

On August 1942, the Panzer finally reaches the north of Stalingrad. They start to attack the city in September. The Russian Red Army responded by encircling them. There were 290,000 axis troops trapped.

The Germans responded back by sending an army group to free them. The effort failed and the German troops surrendered. This defeat is the first large defeat happened to the German team. It sets a turning point to the whole World War II’s dynamic.

Panoramic view of the battlefield

The main exhibition of this museum is the panorama art titled “The defeat of Nazi troops under Stalingrad”. It consists of 2000 square meters of painted canvas and 1000 square meters of replica and reliefs. Examining this exhibit would make you feel like you’re being transported back in the time of the battle. It is harsh, bloody, and horrific. and a reminder for everyone that there’s nothing but suffering in a war.

The 3d construction will give you an almost realistic experience of what was happened during the battle of Stalingrad. Prepare to be haunted and mesmerized. There is an audio guide with headphones which you can rent at a fee. You can also see some documentaries about the battle. Check out some books that depict war in Russia. You may also be inspired to read a book about Russian heroes.

You will also see exhibits such as the personal belongings of the soldier. There are documents, honor, and awards. You’ll also see the list of the name of fallen soldiers. A remembrance to those who bravely defended the country.

Included in the same area of the building is a 5 story building with red bricks. You can clearly see that this building is in ruins. This old mill was built in 1903. It was destroyed in The Battle of Stalingrad. It was left no restored as a remembrance of the past. It is now one of the monuments commemorating the battle.

On the outdoor area of the museum, you’ll also see a number of vehicles used in the battle. You’ll see tanks and planes. The best of it, children can climb these tanks. For adults, you can take a good selfie with them. Apart from tanks and planes, some artillery guns are also available.

Views of the river

After the museum tour, head outside to the riverbank of Volga. Where you can breathe fresh air and enjoy the scenery. Learn also some interesting facts of Volga river. And how the Volga has unique history. After the bloody war you just learned at the museum, it’s hard not to be grateful with how the Volga is today. You’ll appreciate today’s Volga with shining sun, the warmth, good weather, and on top of everything, no war whatsoever. You can see the comparison between Russia before and after world war.

Other monuments about the battle of Stalingrad.

The museum is not the only sites serving as a remembrance of the battle. These are some other monuments you can visit:

The 85 m high statue is located a top of Mamayev hills. The hill is one of the locations where the battle had the fiercest fighting. Now a statue depicting a lady holding swords with the other hand pointing toward the direction of Volgogard. The name sums it all up. The statue calls the brave Russians to defend its motherland.

Bricks from destroyed buildings are transformed into the monuments of this memorial complex. You will pass through Mamayev Hill Memorial Complex on the way to the Motherland Calls statue. You’ll also see the hall of Glory, where an eternal flame is housed alongside the name of 7200 soldiers who died in the battle.