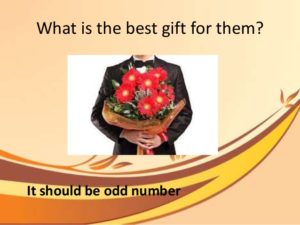 The rich Russian culture never ceases to amaze anyone that comes across it. From heavy use and symbolisation of flower to the signification of numbers. This article will entertain you with the popular superstition about numbers in Russian culture that is still practiced these days.

1. Odd numbers equal joy and happiness, but even numbers? Well, not really

Yes, you read it right. Even and odd numbers do signify different things in Russian tradition. When you bestow someone with flowers for happy occasions, remember to bring the flowers in odd numbers. Otherwise, you will risk offending the woman you are trying to woo or cheer up. It is considered bad luck to present even number of flowers in Russian culture. Even numbers are highly associated with death and mournful events. Perhaps, that is also the reason you can not find flowers in even numbers in any Russian paintings.

The tradition dated back to the ancient Russian time, during which only victims of the war were given two flowers. One of the flower was for the deceased, while the other one was meant to be presented to God. From there on, all the dead are honoured with flowers in even numbers.

In modern Russian culture, flower bouquet follows the rule of “up to a dozen odd”, where we should pay attention to the number of colours in the bouquet if they come in odd numbers: three, five, seven, and the list goes on. On the contrary, if the bouquet is built from more than twelve colours, there will be no semantic meanings behind it.

2. One flower for the only one, three for the loved and respected one

Now, it is time to get to the tricky part: some odd numbers even have special meanings behind them. If you are about to tell somebody that they are the one, one flower is all you need. For those who are madly in love, we highly recommend you to bestow them three stems of flowers. Three flowers in Russian culture signify one’s desire to leave to the edge of the world with their loved one. Another meaning of three flowers in Russian tradition is that three flowers signify one’s respect and recognition to the other person.

Gentlemen, when you are ready to confess your feeling and deep affection, be like Russian guys. Being deeply affected by flowers, Russian guys even use flowers to help them convey their affection to their loved ones. While we generally believe that actions speak louder than words, while Russians believe that nothing says “I love you” better than five stems of flowers. Yes, you guess it right. Giving five flowers to someone signify that you are saying the three words to them. Well, what can be nicer than a sweet confession topped with five pretty bits, right?

Next on the list, is the lucky number seven. While seven is said to be the lucky number anywhere around the world, in Russian tradition seven signifies one’s deep adoration. And here a heads up, if you want to propose to your long time romantic partner or if you are attending a friend’s engagement party, bring seven stems of flowers with you. Although not so popular, the tradition back in the days was that seven stems of flowers were only given on engagement day. Aside from engagement day, the customs of Russian weddings are also very interesting to learn.

5. Please have mercy on me

Now what if one would like to express that they are head over heels with someone? Easy peasy lemon squeezy, the answer is to bestow them with nine stem of flowers. In Russian culture, bringing nine flowers means that one is so madly in love with the other that he is at the other person’s mercy (hopefully in a good way, tho!)

Wondering where did this practice about numbers actually come from? The origin of the practice is believed to have come from pre-Christian times but different part of the world had developed their own customs. In Georgia, for example, even numbers are believed to bring happiness and good luck. On the contrary, people there do not bring flowers in even numbers so that the deceased would not bring their other half along with us.

The practice as mentioned before, is believed to have been developed during the pre-Christian times. In Paganism, it is believed that even numbers are the symbols of evil and death. Are you familiar with the saying “misfortune never comes singly” or “misfortune never comes alone?” It may have been related to the belief. The beliefs in many ancient cultures across the globe view even numbers as the symbols of finality and completion, which in this case is the cycle of life. Oh the other hand, odd numbers are viewed as the instability, constant changes and movements, as well as development; just the way we progress when we are alive.

Even in the ancient Pythagorean, odd numbers were on the right side which everything good is signified with: life, goodness, tranquility, light and light. Again, even numbers which ended up on the left side signified evil, darkness, and dark.

Well learners, let’s start paying attention to the little details that matter big time in different cultures across the world. For more interesting fact about Russian culture, you can read bread in Russian culture Interested in learning grammar instead? We have a page of comprehensive Russian grammatical rules. Let’s start learning and discover more about Russia!