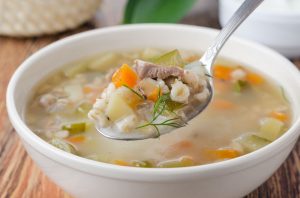 This dish is a soup based on broth and prickled cucumber is an old recipe that became classic in a soviet cafeterias in Leningrad. Rassolnik is a simple dish to prepare and the ingredients are easy to find. Nowadays, there is a restaurant named Cococo that is presents a contemporary reconstruction of rassolink with a simpler recipe, yer more interesting than the original one.

The chef is a proponent of locavore cuisine that only uses local grown seasonal products. On the costumers’ eyes, this dish is resemble the old one with chicken hearts, barley, a tartare ofzpickled cucumber whit pickled and sun dried tomatoes are laid out to cover the broth. This dish has an aromatic sweet and sour elixir full of healthy acids and also mineral that impacted in healing processes. This dish somehow is an effective soup for remedy from a hangover. Cococo is also known as a popular late night restaurant in St.Petersburg.

The next contemporary food is Altay Crayfish. As known before, that national food or Russian are fishes. They eat fish as the required menu that should be eaten every day. On the old recipe, crayfish was cooked by placed them in a concentrated vegetable broth while the fish still alive. Nowadays, a chef named Roman Palkin said that he made a contemporary food based on this crayfish old recipe, even though he denies. In the new version of the recipe, it is upgrading in the sauce combination. The sweet meats of the crayfishes are punctuated by a play on sour and sweet tones.

There also added marinated beets, fermented marmalade – like garlic and weightless mayonnaise with saffron. The most interesting thing from this products is that the pharmacist’ precisions are needed in calculating the ingredients amount. If you are a fan of garlic, you may love this dish, because garlic are presented in three form in this dish, they are fermented on the form of paste, marinated in the form of emulsion and seared in to powder. It also can be considered as the healthiest staple foods of Russian Cuisine because it has crayfish as the main ingredients. You may find this contemporary food in Moroshka dlya Pushkina Restaurant. Beside, this restaurant, there are also many popular night restaurant in St.Petersburg.

This contemporary food is having the trendiest and various popular citations from some countries such as Italy and japan. In the new recipe, the carp fillet is fried and placed by a background of a typical palette of the USSR. The Chef Named Anton Isakov added canned sprats to a mashed potato akin to a Mediterranean brandade. Other interesting thing is he also served the cod liver oil in the form of cream then the radish are marinated, and the mildly salted cucumbers are fried in form of a sour cream.

The way of the carp cooked was made the people remember of the culinary history that Russia shares with China. Again, this dish is healthiest staple foods of Russian Cuisine you may try while at Russia. You can get this dish in Gastronomica Restaurant or you may want to try to make it by yourself. If you want to cook it, you can find the ingredients in the best 24 hours supermarket in Moscow if you are in Moscow, or in the best shopping place in the Russian that are available in all city of Russian.

There is a chef of Palkin Restaurant who features Elena Molokhovets and Urbain Dobis named Pavel Melnikov.  Palkin is the oldest restaurant in the st.petersburg that is serves a lot of menu with various healthiest staple foods of the Russian cuisine. He respectfully works with balancing between restoration and reconstruction of old recipes. By Melnikov, Lake Ladoga pike perch is cooked slowly and delicately according to the technology of sous-vide and put on cushion of Kamchatka Crab.

It is sure are a new and unique way in cooking the pike perch that make anyone can’t resist to taste this menu. It is also interesting when a folksy sour taste of sorrel is presented in the form of light biscuits to company the dish. The most interesting side of this dish is that the ashes of burned onions are became the trendy accent and at the same time being an allusion to the historical recipe. The chef once said That he want to make the people come to the restaurant simply for getting god food. These days, you may find this menu in many restaurants, especially in the popular night restaurant in St.Petersburg.

It’s quite long name for a menu. It is another healthiest staple foods of Russian cuisine that became a contemporary food. Chef Nikolai Khvalynsk plays on a national preference. Nikolai try to bring back the popularity of the menu and restaurant. He pursuit the consistency of the recipe by marinated the cod liver in spicy herbs infused with apple smoke using a special smoking gun and excessive fat is removed from the fish. The fat was removed in a low – temperature vacuum in sous – vide than it has been froze.

There are 5 Contemporary foods you must try when in Russia, even though there are still some other contemporary foods that you may be find in the popular late night restaurant in the Russia, or if you are in Moscow you may hunt healthiest staple foods of Russian cuisine in the best 24 hours supermarket in Moscow.