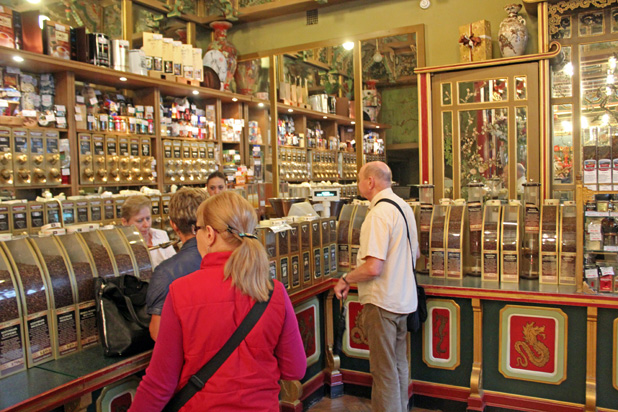 Knowing that Russia is a tea-drinking country, visiting here without having the experience to taste the tea is absolutely a pity. What’s interesting is that the places in Russia where you can taste the best tea in town are not only cafes or restaurants. You will also be able to find tasty tea drinks, as well as learning more about Russian tea culture in museums, or even directly in the tea plantation.

Have you ever imagined walking through a tea plantation, while getting a field lecture about the history of tea in Russia? Located in Sochi, the only place in Russia that produces tea, here you will have the opportunity to experience a Russian tea party in a country log house, called Izba (изба́). You will have the look and feel of how the Russian tea culture began—drinking tea from the Samovar, with the accompany of the ear-spoiling Russian traditional folklore music.

Passing by the street of Myasnitskaya Ulitsa, you will not be expecting this kind of building exists. The Chinese style house really stands out among all the buildings surrounding it. It was initially the house of Perlov family, who owns A tea dynasty with successful tea merchants. Here you can taste the exquisite teas, ranging from Russian, Indian, Ceylon, until the Chinese ones.

This place is well-known for its high-quality tea. It is obviously a heaven for tea-fanatics, as they serve a wide range of teas in the menu. Not only being able to speak English, the Barista there is also helpful in guiding you to choose the tea. Although the name of the shop is “Oh! My Tea”, the place also serves delicious coffee drinks. So this café is obviously worth a visit by non-tea-drinkers too.

Double B is actually a chain of coffee bars, which is famous as one of the comfortable coffee shops in Russia. However, they also serve a range of tasty teas. You don’t have to worry if you don’t understand the different kind of tea they serve, as the waiter will nicely explain it to you. If in the end you still cannot decide which one to choose, you may consider the Chinese green tea, as it is the must-try one.

This place offers a tour to the factory, so that you will be able to see the tea plantation, as well as how the tea is being produced, including the ripening, picking, also how the fermentation is done. You will also have the chance to taste the tea while you are on the tour. The tea sold in the store is actually cheaper than the retail price, so you can buy tea there not only for yourself, but also for your friends as a gift. It is also nice to bring your whole family here, as the place is children-friendly.

Being the largest restaurant in Grozny, this place is well-known for its delicious steak, as well as tea. The mint black tea here is obviously the recommended drink to try.

Having a tea ceremony here will be one-of-a-kind experience. You will be able to taste one of the best Chinese tea drinks, in harmony with the atmosphere of Chinese tradition. The Tea Master there will explain everything about the tea-drinking, as well as Chinese ancient tradition. If you do not wish to join the master class in the tea ceremony, you will always have a choice to only have a relaxing time while drinking a cup of tea, as you enjoy the scene there.

This is another place to have a tea ceremony and learn how to brew authentic Chinese tea as what was done in the ancient traditions. Here you will also be able to buy teas and accessories for brewing. This place is well-known for its large selection of tea, with wonderful taste and aroma, as well as the price that is totally worth the experience.

If you want to learn about the history of Tatar (Turkic-speaking people living in Russia) settlement in Russia, how Muslims had their struggles during the rule of Russian and Soviet authorities, this is the place you really should go to. Not actually being a place that is visited for its tea, this museum offers a tea ceremony at the end of the tour, serving the best tea in Kazan, as well as Tatar sweets.

Here you can taste one of the most delicious tea drinks in town, as well as try the traditional Russian lunch. The great atmosphere, along with the pleasant interior, makes this place a perfect stop for relaxing time and socialising with families, after taking a long walk in Red Square. The must-try drinks here are black tea and the therapeutic herb tea.

11. Museum of the History of Krasnodar Tea and Auto-Moto Antiquity (Sochi)

This museum consists of three different areas, which are the History of Krasnodar Tea, one of the best teas consumed in Russia, Retro Cars, and Samovar, a traditional kettle used in the early time of Russian tea culture. The museum is actually based on Dagomys Tea Factory, so that you will be able to see the tools that are usually used in the tea-making. At the end of the museum tour, you will be treated with delicious local fragrant Krasnodar Tea, along with tasty donuts, making the museum one of the places in Russia where you can taste the best tea in town.

This museum shows the everyday life of Tver population and creations made by the city’s peasants and craftsmen, such as furniture, clothes, and children toys. This is also one of the places where you can experience a tea ceremony, while being able to see a collection of Samovars and other tea accessories.